Oakland Crows: A Big Mess but a Harmless Murder

Trees around the campus of the University of Pittsburgh are filled with nesting crows, and many students are wondering why. 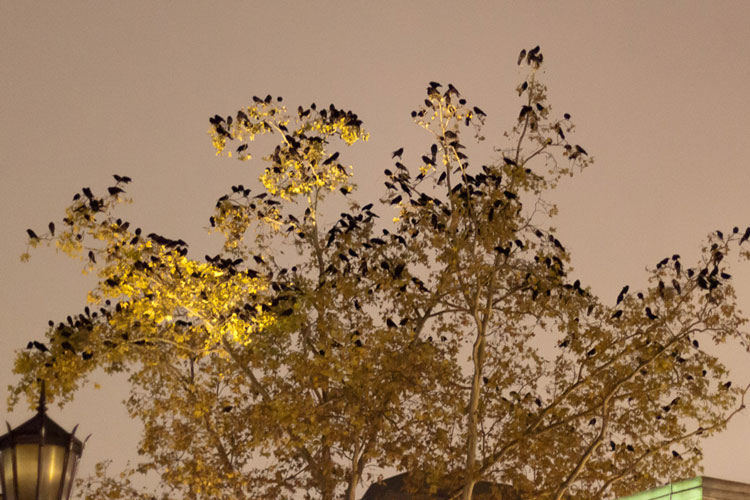 Photo courtesy of Peter A. Bell

If you walk around The University of Pittsburgh’s campus after dusk, you might wonder why the trees still have leaves on them. Upon closer inspection, you’ll realize those dark leaves are actually crows.

Students started noticing the crows during Halloween weekend. Small groups, poetically referred to as “a murder” and technically called flocks, are not unusual around campus during the day. However at dusk, their numbers grew from dozens to an estimated 2,000 to 4,000.

While crows’ presence may seem foreboding, especially when they darken the sky as they settle into the trees, but they’re not the blood-thirsty crowd their collective name suggests. Crow expert Kevin McGowan at Cornell University says crows rarely attack and are not carriers of any human diseases.

The crows usually arrive in late October or early November and leave after a few weeks to roost in the Strip District or Polish Hill. However last fall, they remained in Oakland, and bird experts aren’t sure why.

“It’s pretty light in Oakland, with street lamps that keep things light, which might be attractive to them,” University of Pittsburgh Biological Sciences lecturer Anthony Bledsoe said.

Crows have been moving to urban environments since the 1970s, when they became protected by an extension of the Migratory Bird Treaty Act of 1918. The city lights let them watch for and avoid their biggest predator, the great horned owl, which is rare in urban areas. Cities also tend to warmer than their rural counterparts.

While they’re here, they’ll fly up to thirty miles from Oakland to search for food. As scavengers, they’ll visit dumps and dumpsters and they’re even smart enough to notice when a particular neighborhood has its garbage collection day.

“I wouldn’t be surprised if someone found one walking around a McDonald’s parking lot,” Bledsoe said. “They’re omnivores, so they’re not picky about what they’ll eat or where they find it.”

While the crows are in Oakland, they’re also on the look-out for potential mates for the spring. According to St. John, “the winter roost is the bar scene for crows.”

The birds usually fly away from Pittsburgh by late February or early March, but that’s not soon enough for the University of Pittsburgh. The crows may be harmless to pedestrians, but their excrement can overnight turn the sidewalks along Forbes and Fifth Avenue near the student union into something resembling a Jackson Pollock painting.

To persuade the crows to roost away from campus sidewalks and bus stops, the university is playing recordings of great horned owls to scare away the birds.

“We’re not trying to eliminate the crows, but we try to move them to less populated areas where fewer people are walking,” University of Pittsburgh Assistant Vice Chancellor of Operations and Maintenance Dan Fisher said.

If you know what a great horned owl sounds like, you may be able to pick out the recordings as you walk around Oakland at night. The university moves the portable systems wherever the birds are roosting.

The crows can be a nuisance, but students have come to expect them as part of daily life on campus. Who knows? The seasonal flocks that fill the night sky might even inspire a rival to Edgar Allan Poe’s famous poem.