Liberty Magic, the new venue in the Cultural District, is all about perfect presentation. 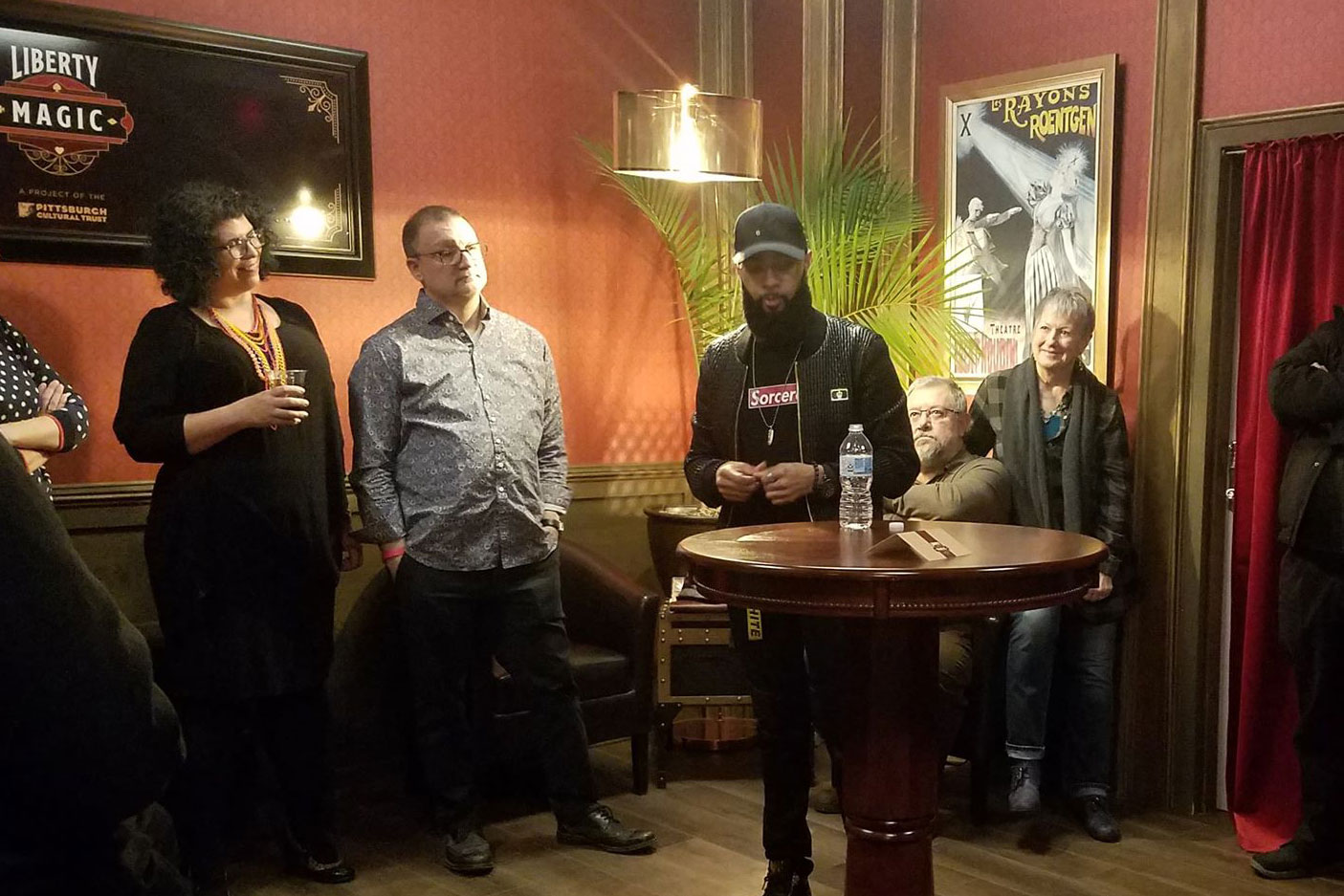 Even the most casual observer of stage magic — a category which certainly includes me — will tell you that presentation is everything.

A man can perform a card trick on the street, free of all adornment. But sleight of hand and other such skills are far more impressive when they’re given a healthy dose of flair. Liberty Magic, the new parlour-magic venue in the heart of Downtown, absolutely nails the flair.

The space, thoroughly converted from its former life as the original home of Arcade Comedy Theater, is a marvel of a small venue where every detail is honed for magic acts alone. In the front lobby, a mockup of a caged Harry Houdini hangs upside-down in the front window. Trinkets of the mysterious and macabre line shelves that reach to the ceiling; tricks and mystical trinkets are for sale, giving this room the air of a curiosity shop.

The main theater offers four rows of tiered seating pressed up against a wide stage; there’s more than enough room for the magician at hand to move and draw volunteers into the act, but not so much that anyone in the intimate venue will miss a single flick of the wrist or turn of a card. Beyond the curtain, a green room decorated with trappings of early-20th century illusionists welcomes guests for post-show meet-and-greets.

The service, too, is unparalleled; rather than quickly ushering guests to their seats, a fleet of appropriately attired helpers will introduce you to the experience. You’ll likely get more individual attention here than you will at any other Downtown venue.

It’s a remarkable space. And it perfectly primes the audience to be drawn into the show.

The inaugural resident at Liberty Magic, Eric Jones, will appear through March 17. The evening’s host will tell you about Jones’ bona fides — a high-ranking run on “America’s Got Talent,” residencies from coast to coast, successfully stumping Penn & Teller — but Jones’ act more than speaks for itself. The first time you see him conjure a coin or a card from thin air, you’ll realize you’re in the room with one of the absolute best in the world.

Jones’ show, dubbed “Impossible,” is not stuffed with high-tech illusions or unsettling bits of sideshow; the substance of what he’s doing is old-school misdirection. “Impossible” impresses because Jones is uncannily skilled at what he does; you’re pretty sure that there’s a relatively simple explanation for each trick, but his remarkable talent makes it a fool’s errand to try to track what’s going on behind his subtle movements.

I’d recommend the “Skeleton Key VIP” experience (which was provided to Pittsburgh Magazine for review purposes). The premium tickets — regular admission starts at $40, while VIP is $65 — offer a closer seat and a better-than-average chance at being drawn onto the stage as a volunteer; more importantly, those holding the Skeleton Key (yes, there’s an actual key) are invited to the green room after the show.

The backstage area is the coolest space in a venue full of them. While there, audience members have the chance to put questions to the performer; on the night I attended, Jones performed a couple of extra tricks, even explaining how one was completed. (Could I try it myself? Sure, but I’d screw it up.)

Parlour magic may not be everyone’s preferred form of entertainment (though this venue will go a good way toward convincing the skeptical). For those seeking a different sort of night on the town, though, this place is a lovely addition to the Cultural District. There’s something thrilling about the fact that, within a few blocks of Downtown, you can wander around choosing whether to see theater, comedy, classical music, magic and more. I may not always choose magic from that list, but I’m thrilled to have the option.