His grandmother’s tools have done a great job for nearly 30 years in his care, and they’ve spent their share of rainy spring nights alone in the garden. But before the snow is gone, Doug Oster pulls out the trowel, shovels, edgers, forks and hoes from his toolshed in preparation for the day when the smell of spring fills the air and nostalgia is in full bloom.

I have only one memory of my paternal grandmother. At 6 years old, I stood at the bottom of the stairs looking up as an ambulance crew slowly carried her down on a gurney. At the bottom, she lifted her head, looked right at me, managed a gentle wave and gave a sweet smile that made me think everything would be OK. It wasn’t. That was the last time I saw her.

Years later, I rooted through my parents’ toolshed to resurrect the unused garden tools she shared with my grandfather, who I never had the pleasure of meeting.

I had just bought my first house and at 23 started a torrid affair with gardening that continues today. The tools would follow me through a lifetime of digging, planting and learning the lessons taught exclusively in the garden.

These tools have done a great job for nearly 30 years in my care for one reason: I try my best to take care of them. But even though I’m nostalgic by nature, they’ve spent their share of rainy spring nights alone in the garden.

Before the snow is gone, I get the trowel, shovels, edgers, forks and hoes out of the toolshed in preparation for the day when the smell of spring fills the air. 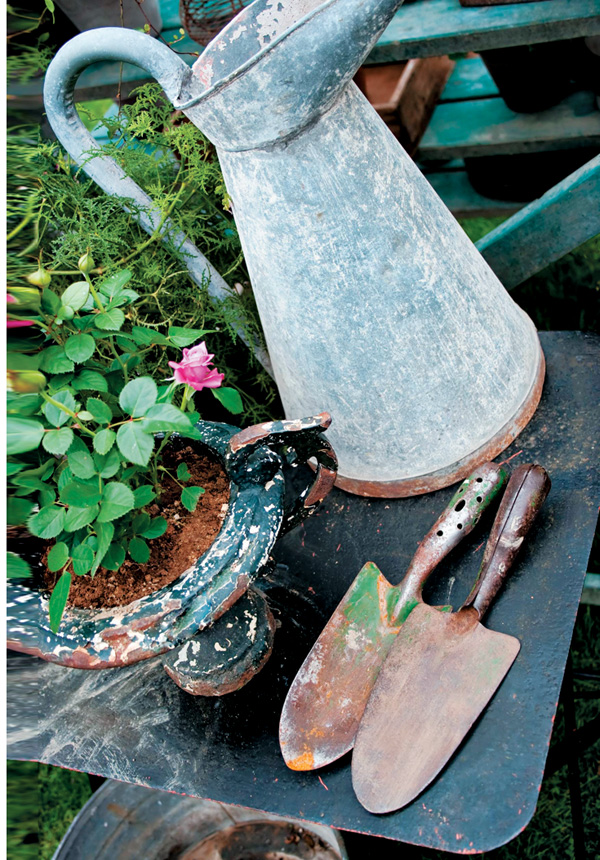 The handles on these Depression-era tools are made from good-quality ash and might last for a century or longer if the wood is rubbed with boiled linseed oil a couple of times a year. Take an old rag and coat it with the oil and work the oil into all of the wooden parts of the tool. Let it soak in and repeat two or three times. It keeps the handles flexible, hopefully preventing cracking.

But sometimes roots, rocks and other obstructions can get the best of a tool. It’s a sad sound when a handle cracks while trying to pry something out of the ground. Every gardener knows the tool will never be the same after the handle needs to be replaced.

That can be quite a chore with rivets over 50 years old. When the handle of my grandfather’s Solid Shank True Temper Lightweight Bantam bit the dust, I pounded, drilled and chiseled the rivets without success.

My kindred spirit and 70-something neighbor Rob Joswiak had the brilliant idea to throw it in his wood burner. The wood was burned out, giving access to the rivets, which were easier to remove. I bought a new handle and kept the shovel going a few more years until it finally succumbed to a large rock in the garden.

The metal parts of the tools need to be cared for, too. A sharp tool will last a lifetime and make garden chores easier. There’s a sharpener that’s been my friend for more than 15 years called AccuSharp. It’s a hand-held sharpener that simply runs over the edge of the blade of a shovel, pruner, hoe or other tool. It’s the easiest way to keep my tools sharp; I hang it in the tool shed and use it when needed. Some gardeners use a metal file to keep their tools sharp. Whatever is used, sharp tools are a must.

A coating of motor oil a couple of times a year on the metal parts helps retard rust.

I actually lost my grandmother’s pruners for two seasons. I couldn’t believe my stupidity and mourned their loss. One summer day when I walked out the kitchen door, her pruners were sitting right in the middle of a tiny patio. I considered it a gift from heaven, and those pruners were retired to be used only for speaking engagements.

Often when showing them to garden groups, I think about the last day I saw my grandmother and dream that she’s still smiling as I honor her old pruners and garden tools.

Doug Oster is the Pittsburgh Post-Gazette’s Backyard Gardener and co-host of the popular radio show The Organic Gardeners every Sunday morning on KDKA 1020 AM. He just released his third book Tomatoes, Garlic Basil. For more information, log on to dougoster.com.

This article appears in the Spring-Summer 2010 issue of Home & Garden.
Categories: HOME + Design