Noir Creeps Out of the Shadows

Immerse yourself in the noir style, a renegade worldview filled with suspicion, crime and some excellent reading material. 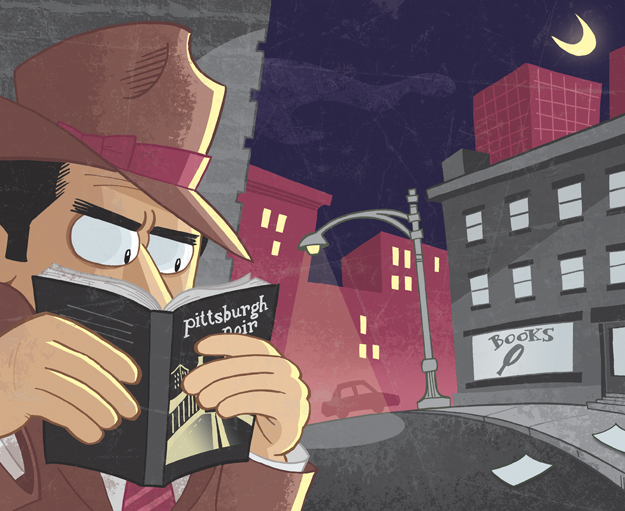 It’s a sultry night in Lawrenceville. At the Round Corner Cantina, the sangria is flowing. A siren is howling somewhere in the distance. Here, the crowd casts the occasional glance skyward. Rumor has it there’s going to be a storm tonight.

Several local authors are standing under a tent in the rear courtyard, their smiles belying the grim reason for this congregation. They’re gathered to witness a murder—several, in fact.

They came to celebrate the publication of Pittsburgh Noir, a new anthology of shadowy tales and crime fiction edited by Kathleen George. Among the writers in attendance are Hilary Masters, Lila Shaara and Tom Lipinski. They each offer a teaser to the audience, a little taste of the dark flavors to be found in their stories. Bodies fall, and books are signed. The storm crashes in, and everyone is having a good time.

But what exactly is noir? How does it differ from traditional mystery stories? Mary Alice Gorman, co-owner of Mystery Lovers Bookshop in Oakmont, suggests that noir is “darker and morally ambiguous,” and “it explores those human questions that don’t have an easy answer.” Which is to say that noir is not so much a genre of writing, but rather it is understood more as a style and worldview.

Jason Baldinger, co-author of The Whiskey Rebellion, adds that noir “is the seediest elements of our natures personified in anti-heroes, such as drunks, bums and gold diggers, delivered in concise language that holds absolutely no pretense.”

Pittsburgh Noir is the latest in a series of city-based anthologies published by Akashic Books. So, how did Pittsburgh come to be counted among such dissimilar locales as Moscow, Haiti and San Diego?

“I went to Akashic with the idea because I kept seeing [an anthology] for all these cities, and I love Pittsburgh,” says George, an editor and contributor. “So, I approached them and said ‘Is Pittsburgh ever going to have one? Because I’d like to write a story for it.’ They asked me a few questions, and pretty soon, I was editing it.”

George has brought together quite a rogues gallery of local writers for the collection. Among the authors, she also lured Terrance Hayes, a poet who won the 2010 National Book Award, to turn his hand to fiction for the first time. Even more of a coup was getting a brand new tale from the legendary K. C. Constantine, breaking his near decade of silence. The secretive scribe has also been seen in public signing books at events for Pittsburgh Noir—another first.

Although Pittsburgh has a strong history of talented writers working in the crime and mystery genre—from Mary Roberts Rinehart to Nancy Martin—the city is somewhat underrepresented in the pages of noir. Is the city a natural setting for these types of stories? Gorman thinks so.

“We have our share of dark history, mean streets and fractured souls,” she says.

Dave Newman, author of Please Don’t Shoot Anybody Tonight, offers this anecdote: “I was sitting in Dee’s a couple years ago, and some young, good-looking guy took the stool next to me and flagged down the bartender. The bartender was a woman in her early 60s with bleached-blonde hair and skin-tight, faded jeans. She’d been waiting on drunks who love to play pool all night, and she was still in a good mood. The young guy pulled out some crumpled bills and said, ‘I’ll have my usual.’ The bartender finished washing the glass in her hand and said, ‘Honey, I have no idea what the hell your usual is.’ The guy, completely devastated, mumbled, ‘whiskey,’ then pretended to be interested in the jukebox.

That’s why Pittsburgh is a great city for noir.”

As is often the case with uniquely American creations, it took critics from France to point out the field of fiction and film we currently know as noir. While noir may have begun in the 1930s with hardboiled writers such as Dashiell Hammett and James M. Cain, its popularity has never waned.

“Something about the renegade personality and private morality, a factor of lust,” explains George. “Seventy-five percent of the time people get away with things. It’s not your usual idea of justice.”

In his story A Minor Extinction, Paul Lee tidily sums up the project of the anthology and Pittsburgh’s own relationship to the dark mirror noir provides: “He imagined shadowy figures standing on alien riverbanks in alien Pittsburghs, each bearing the terrible weight of some tiny murder—crimes and lives and lineages as ephemeral as a dream disintegrating with consciousness.”

Web extra: We asked four Pittsburghers who are rooted in the city’s noir scene to name their favorite noir novel or film. To see their answers, click on the gallery below:

This article appears in the August 2011 issue of Pittsburgh Magazine.
Categories: Arts & Entertainment, Things To Do