No Rest For The Wicked

In the most frenzied season in NHL history, the Penguins are flourishing. 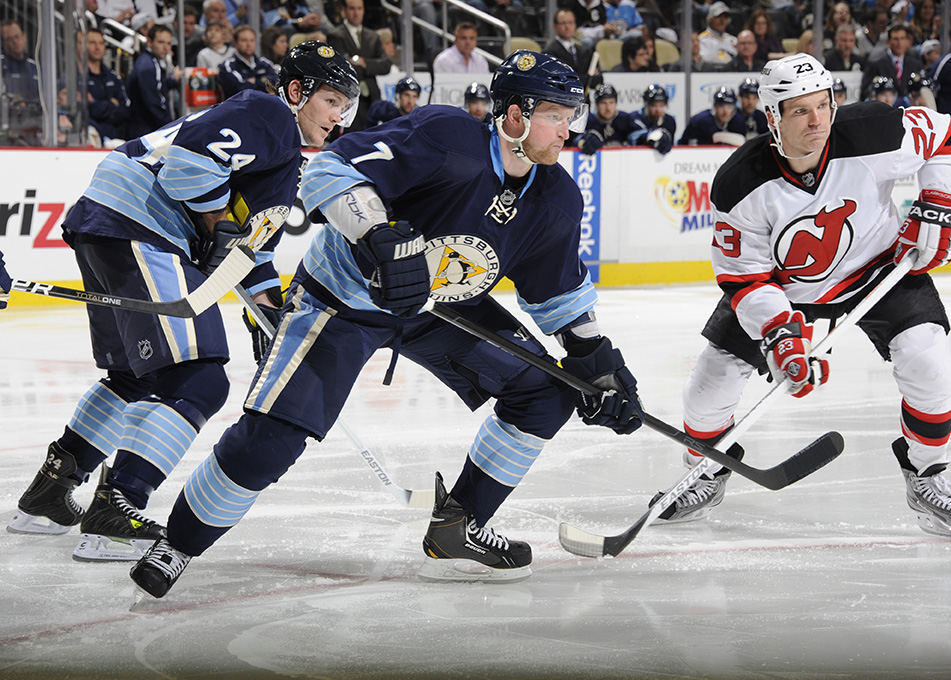 The Pittsburgh Penguins have never played as much hockey as they are now. Forty-eight games in 99 days. That’s what a lockout-shortened season amounts to — a grueling dash to play a decent number of hockey games and determine the competition for the Stanley Cup Playoffs.

It’s slightly less than a game every other day, if you’re doing the math. In a normal NHL season, the Penguins would play six or eight fewer games in their first 99 days. The elite Robert Morris University Colonials took the ice 20 times over the opening 99 days of their 2012-13 season; James Neal’s old juniors team, the Plymouth Whalers, played 34 times in the same time period.

In short, the Pens are playing a lot of hockey.

Taking on one of the world’s most physical and violent sports at a breakneck pace is an intimidating prospect — and that fact did not escape fans (or the hockey media) in the weeks leading up to the abbreviated season’s launch: Will more games mean more injuries? With limited opportunities to rack up points, will it feel like the playoffs all season? How will the players adjust and adapt?

When the puck dropped, though, the questions quickly went from macro to micro: Should Marc-Andre Fleury start 50 or 60 percent of the games? Who’s going to play alongside Evgeni Malkin on the second line? Is it too soon to call up Beau Bennett?

Amidst the fog of hot streaks and coaching decisions, those big-picture questions weren’t answered. It’s the toughest NHL season in memory. How are the Pens handling that?

“We’re playing a lot of games, and sometimes it gets to you a little bit,” Fleury says. “But everybody [in the league] has it the same, you know? Everybody travels a lot, and everybody has a lot of games.”

Sure — but the Penguins seem to be playing better than most of those other teams and have a trio of players (Neal, Sidney Crosby and Chris Kunitz) who have dominated the leaderboards in just about every offensive category. Even when playing a second night in a row — or for a third time in four days — the Pens have come out of the tunnel crisp. Obviously, there will always be good teams and bad, but aren’t the Pens enduring just a bit more ably than their counterparts across the NHL?

Matt Niskanen has a theory: “Commitment to the details of the game is a focus of ours, here. Even when you’re tired, if you have good details in your game, you’re not sloppy in certain areas. Guys have done a good job of staying focused and coming to the rink with the right attitude.”

“We don’t have as much time to have good practices,” Brooks Orpik admits. “But it hasn’t been too bad. I think we’ve managed it pretty well — it’s important that you get your rest and be more disciplined off the ice.”

Jay Caufield, former Penguin and current Root Sports Pittsburgh analyst, credits the team’s conditioning. “Every year, they come into camp in shape and ready to play,” he says. “And the coaching staffs are making sure they get the proper amount of rest between games.”

The captain concurs. “I think we’ve managed our days off, managed to take care of ourselves the best we can,” says Crosby, who spent the early part of March with a stranglehold on the league’s overall point lead. “There are times [when] you can tell that we played last night. But once you get into it and get going, it gets better.”

Perhaps that’s an apt description of the season as a whole. When the puck dropped Jan. 19, 48 games in 99 days may have seemed daunting. But when life in the NHL got into full swing, it was back to passionate, focused hockey for the Pittsburgh Penguins.

This article appears in the April 2013 issue of Pittsburgh Magazine.
Categories: Penguins