There’s something magical about an igloo. Growing up, my brother and I built a snow igloo in our backyard one frosty January. The construction took days. Our frozen fingers were numb from packing and smoothing the icy flakes. I still can remember the thrill of crawling in and staring at the arctic dome above. What is it about an inverted bowl that seems so otherworldly? Perhaps it triggers my inner-child, stirring up images of spaceships and UFOs.

Surely the shape of the Mellon Arena (which always will be the Civic Arena to most Boomers) is part of the collective consciousness of Pittsburghers. As the world’s first and largest retractable roof, this engineering marvel sparked wonder when it “landed” in our city in 1961 and became the father of numerous imitators around the globe.

Many of us could list our fond memories of the Arena. For me, it was watching the Ice Capades in the ‘70s with my parents; singing “Heartbreaker” with girlfriends at an ‘80s Pat Benetar concert, an era when I also strolled across Duquesne’s campus many a night to watch 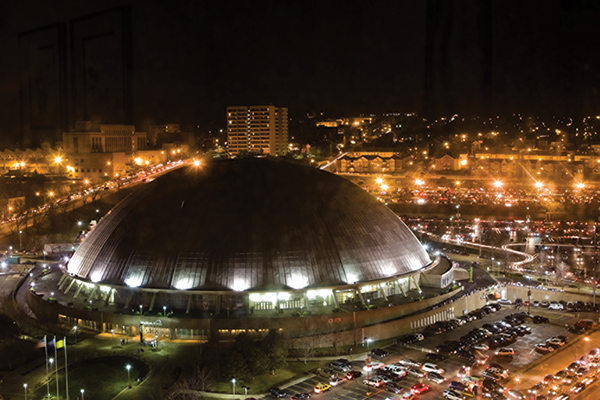 the Dukes in action. In the ‘90s, a decade that included Mario’s magic, my 5-year-old son would meet some of his favorite characters there in Sesame Street Live. During this millennium, our family was entranced by the sounds and special effects of Trans-Siberian Orchestra. And in March, while the Black Eyed Peas were singing “I Gotta Feeling,” I was standing in Section W, eyes fixed above, bidding a final farewell to a place that, for me, will never go away.

In his article “Home Sweet Dome", Craig McConnell takes a last look at life in the Arena.

Also in this issue, food editor Kate Chynoweth puts a new spin on eating cheap in the ‘Burgh with 15 surprisingly inexpensive ethnic dishes that are as delicious as they are diverse (see “Cheap Eats”). And don’t miss our hot picks for some of the best burgers, sandwiches and takeout around town.