Inside info is not necessary to evaluate the University’s sudden move. 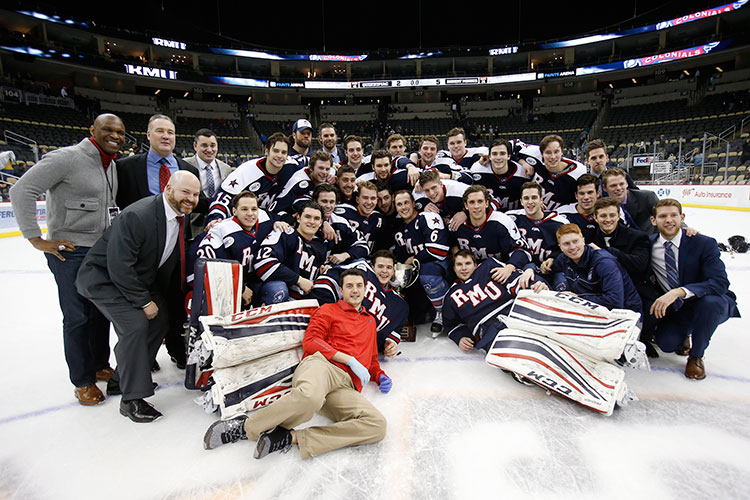 If you asked me to name the sport I most closely associated with Penn State, the answer — unsurprisingly — would be football. Same question regarding Pitt: basketball.

If you asked me what sport I think of when I consider Robert Morris, I’d immediately name hockey.

Most schools, I think, have one athletic program that attains primacy in the cultural consciousness. This may be unfair to athletes and coaches in the many other sports at every school; Penn State has basketball teams, of course, and Pitt has football, and both schools have wrestling and swimming and volleyball. Nevertheless, I’m willing to bet that if I ask you to picture an athlete at each school, you’ll imagine a linebacker on the field of Beaver Stadium and a point guard under the lights at the Pete.

For me, the same holds true for an attacking skater on the Neville Island ice. Perhaps this is an outsized association due to the link between the Colonials’ ice-hockey programs and the Penguins (or RMU’s ties to WDVE-FM, an association to which I’m particularly attuned). Or maybe it’s because this is Pittsburgh — a hockey-loving town with precisely one Division I collegiate program in the vicinity.

Or, rather: A hockey-loving town that, until last month, had one Division I collegiate program in the vicinity.

It goes without saying that the economics of college sports are complicated and, now more than ever, increasingly difficult to navigate. In a similarly obvious statement: The pandemic hit schools hard, particularly mid-sized ones, and athletic programs large and small have been axed nationwide in recent months.

In spite of those challenges, Robert Morris made a spectacularly bad call when the school decided to suddenly and totally eliminate both its men’s and women’s ice hockey programs. No factors, no matter how complicated or dire, can justify that decision.

Beyond what I’ve read in the Trib and Post-Gazette — both of which have had very good coverage of the affair — I come to this conclusion without any insider knowledge or expert insight. I likely don’t know any more than you do about how, when and why RMU made its decision.

That’s just the point, though: I don’t need to know any more about it. No revelation of school finances or breakdown of hockey expenses could convince me. Unless you told me, in simple terms, that the entire University would shut its doors if the puck dropped one more time, my response would be the same: Don’t cut the hockey program.

(And even if you told me that, I’d probably tell you that someone should put hat in hand down at the Duquesne Club and beg until the situation becomes more tenable.)

When an aspect of a college’s culture is so publicly visible, it becomes essential — whether we’re talking about hockey at RMU, robots at Carnegie Mellon or film at New York University. The athletes and coaches that comprised RMU hockey built that association in the relatively short history of the program; you don’t host the Frozen Four twice in 10 years without accepting that people know your college as a hockey school.

The Board of Trustees at RMU likely looked at the elimination of ice hockey as a painful but necessary cut. That’s a myopic view of the decision, though. It is akin to Pitt knocking down the cathedral because it costs a lot to clean and doesn’t technically bring in much money on its own.

There are some benefits and boons that will never appear on an accounting document. A signature asset, such as hockey at Robert Morris, can not be accounted for financially. Even if the program is losing money, it’s not losing money — you get that value back every time the team is covered in the media, every time a Colonials shooter is leading the NCAA, every time Robert Morris’ name is uttered on an NHL broadcast.

This glosses over the human tragedy, of course — the impossible situation facing the Colonials who must now try to find another program to accept them. The second, and more personal, mistake in this decision came in the timing; Robert Morris announced the elimination of its hockey programs too late in the year to make the complicated business of transfers as easy as possible, potentially leaving many of its talented young players stranded. RMU needed to either make this decision much earlier in 2021 or postpone it for a season, out of respect for its student-athletes — young people who made a more momentous and meaningful commitment to their school than their school was willing to make to them.

We wouldn’t need to worry about where these players are going to end up if they didn’t have to leave in the first place. Bizarrely, the school kept its dire financial situation a secret, including from sources that could’ve rallied to preserve the hockey program; the Penguins, and by extension their deep-pocketed network of associates, were reportedly completely unaware there was any threat to RMU hockey.

Callous though it may be, there is a clear model for how to handle this problem, and it’s demonstrated every time a professional sports team wants a new arena. The club makes a public stink about its situation and financial reality; the club threatens to leave town if they’re not helped; the city pushes back; the club gets a new arena. It happens all the time; the Penguins themselves have done it. In all but the most extreme cases (may you live again, Seattle Supersonics), it keeps the team where they belong.

It would’ve been possible to follow a similar model with the hockey program. Some not-so-quiet admissions about the financial situation, some bugs in the ears of the team’s many highly positioned supporters — something certainly would have been worked out.

Apparently, RMU didn’t think hockey was worth the trouble.

I’m sure they had their reasons; I’m sure they gave the matter a lot of thought. I’m sure that, were the key decision-makers to explain to me why this made sense, they’d make a compelling argument.

It wouldn’t be the first time someone thought carefully, had the best of intentions and made precisely the wrong decision.