Nightlife: Have a Ball at the Pittsburgh Pinball Open

The fifth-annual competition brings together enthusiasts of all stripes and offers cash prizes. 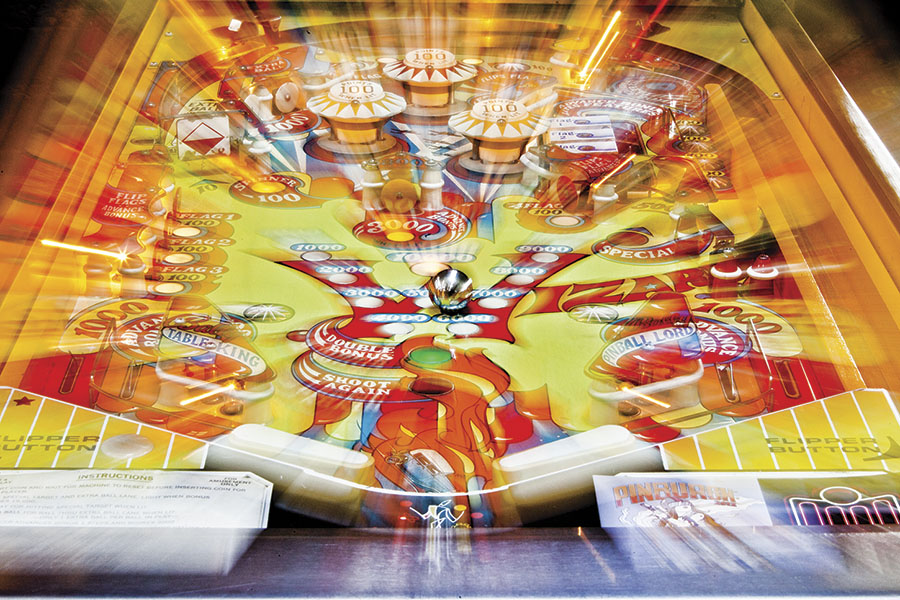 Pittsburgh is the pinball capital of the world, thanks to the gigantic Carnegie warehouse that contains the Professional and Amateur Pinball Association [papa.org] world headquarters.

Inside, hundreds of vintage, classic and modern pinball machines are arranged in endless, orderly rows and big-screen monitors broadcasting competitive matches. The warehouse serves as the venue for the biggest events on the pinball calendar: the Pinburgh Match-Play Championship in March and the PAPA World Pinball Championships in August (Aug. 14-17 this year). Each tournament draws thousands of players and spectators.

In April and May, locals stay sharp through the Pittsburgh Pinball League. Now in its 20th season, the league meets on Thursday, Friday and Saturday nights over eight weeks to crown a local champion. Matches take place at bars and restaurants in South Side and Lawrenceville, including newer addition Kickback Pinball Café.

The local pinball community’s enthusiasm spawned the Pittsburgh Pinball Open, filling the time between league play and the international events. Now in its fifth year, the weekend competition takes place June 27-29 at the Slovak Club of Parks Township in North Vandergrift. The public event includes a main tournament and a variety of side matches, including one for women and one featuring games made before 1990. The tourneys are split into divisions to give less-skilled competitors a fighting chance. The prize pool comes from entry fees and should hit $4,000. There also will be plenty of open machines for those who just want to play.

Those events fill the warmer months. For the rest of the year, there are hundreds of pinball machines scattered throughout the city. Why not drop in a couple of quarters the next time you’re waiting for your pizza or nursing a beer? — Eric Lidji

Dinner and a movie? Who has the time? You multitask with your right hand while texting with your left, so you can’t possibly take your leisure activities one by one.

At Latitude 360’s new Cinegrille, enjoy your meal and your flick simultaneously. The entertainment center’s 80-seat theater offers full-service dining at your seat; before and during a second-run film (think “The LEGO Movie”), members of the waitstaff will take your order for a meal, a snack or — yes — a beer, glass of wine or cocktail. The screen is bright, and the sound system is loud enough to compensate for the occasional passage of food — plus the theater is a slightly more well-lit room than you’re used to, to prevent servers from tumbling. You still can get popcorn, candy and soda — but when you could just as easily order a beer and a shrimp po’boy, we’d suggest saving the Twizzlers for the multiplex.