Take a date, or a friend, to the Pittsburgh Glass Center's February Make It Now workshop. 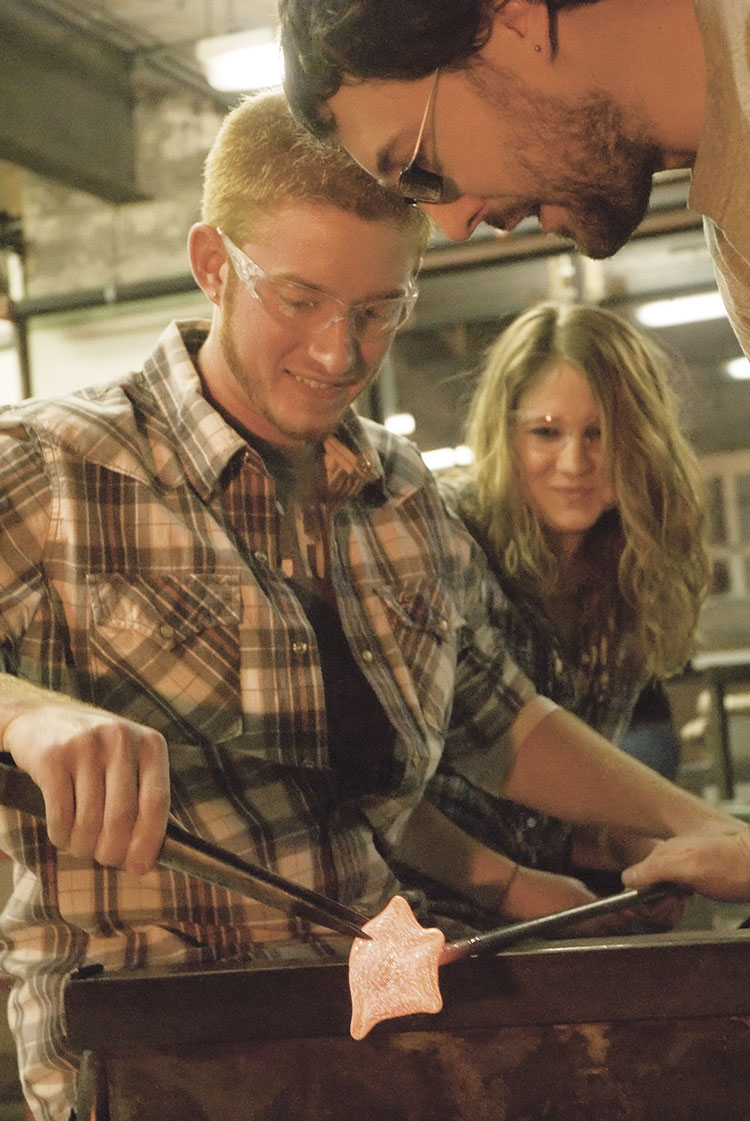 Glassmaking is a love affair of sorts. Silicon and oxygen atoms meet. They hit it off. Under the right conditions, they become silica, the main compound in sand. Under intense heat, those grains of silica become fused into glass. Glassmaking, like a love affair, even can occur with a bolt of lightning. Yes, vitrification can be a pretty sexy process (especially when other molecules get involved: soda, lime, magnesium oxide) — but this is a family publication. For an exceptionally literal “hot date night,” the Pittsburgh Glass Center [5472 Penn Ave., Garfield] offers Make-It-Now. The semi-regular event at the gallery and workshop is a drop-in session where the general public can arrive with little to no experience and produce a glass object. The events usually take place during the day, but the Valentine’s edition is appropriately scheduled for the early evening. You and your paramour — or just your friend — can make a glass flower, a glass love letter or a glass heart-shaped pendant. Glass takes a day or two to cool down, which is a nice excuse for a second date. — EL

In the days before the dominance of the multiplex, nearly every neighborhood and small town had its own single-screen movie theater. Children poured into the building on weekend afternoons for cartoons and family features, and adults walked from home to dinner and a movie at night. Today, most of those theaters have vanished from the landscape — but Aaron and Jackie Stubna have been working to revive those traditions in McKees Rocks. The Parkway Theater on Broadway Street first screened a film in 1939 and operated into the 1990s; a local church purchased it in 1995. Through the nonprofit Community Reel Arts Center, Aaron (who serves as its president) and his crew reopened the theater in 2012; since then, it has been open on average two weekends a month, showing local and independent features, foreign films, retro choices and documentaries. Much of the programming at the Parkway Theater goes beyond simply opening the doors and showing a film. On Valentine’s Day, for example, a couple will pay $15 for two tickets to see either “Breathless” or “Before Sunrise,” two glasses of wine, two boxes of candy and two boxes of popcorn. A popular monthly spaghetti-Western series pairs an Italian classic with pasta, meatballs and Mancini’s bread; this month’s film is 1977’s “Mannaja” (known domestically as “A Man Called Blade”), scheduled for Feb. 26. In addition to special events and regular screenings, the theater could become a destination for local up-and-comers. “We want this to be the house [for] local, amateur filmmakers,” Aaron says. — SC