Next Steps Taken in Restoration of Allegheny Landing

Officials broke ground Thursday for the reconstruction of the sculpture park’s portion of the Three Rivers Heritage Trail. 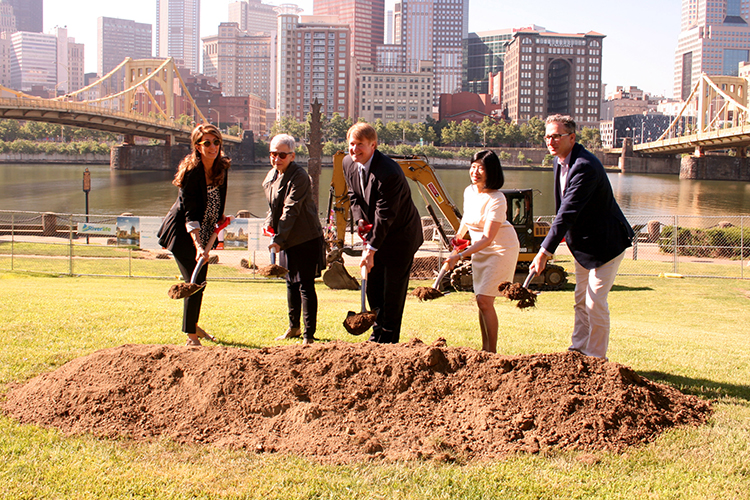 Bicyclists using the North Shore trail will have to endure a detour for the next few months because of reconstruction work at Allegheny Landing. Nestled along the Allegheny River between the Roberto Clemente and Andy Warhol bridges, Allegheny Landing has a prime view of the Pittsburgh skyline.

A ceremonial groundbreaking Thursday morning signaled the third phase of a restoration project to make the park a go-to destination for locals and tourists alike.

Established as one of the nation’s first sculpture parks in 1984, the vandalism and deterioration that Allegheny Landing had endured over the past decades diminished what was meant to be a union of art and urban landscape.

Beginning in 2013, Riverlife — a Pittsburgh nonprofit organization that works to reclaim, restore and promote the city’s riverfronts — and community partners including Friends of Allegheny Landing, Carnegie Museum of Art and the City of Pittsburgh teamed up to support repairs and renovations to the park. The boat dock reopened in 2014 and the Piazza Lavoro sculpture created by artist Ned Smythe was relocated and restored.

Now comes reconstruction of the park’s portion of the Three Rivers Heritage Trail. Plans for the trail include the addition of native plants and a rain garden. Overseen by A. Folino Construction, work on the lower trail will occur this summer at an estimated cost of $305,000.