Wild Purveyors and Cure in Lawrenceville, Eden in Shadyside and Winghart's in Warrendale. 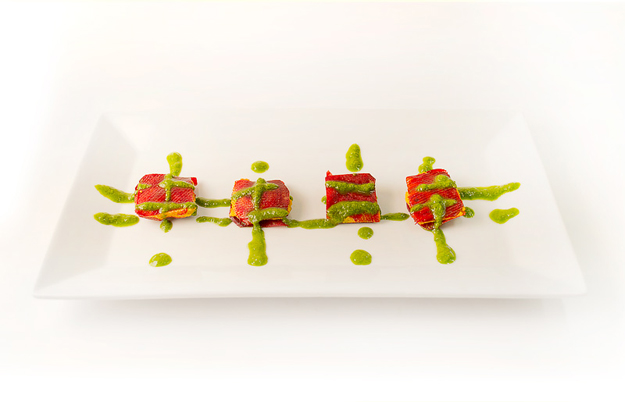 Beet ravioli from Eden in Shadyside

Wild Purveyors
Wild Purveyors is slated to open this month in Lawrenceville, and its offerings are pretty amazing: all kinds of locally foraged wild mushrooms, dozens of locally produced cheeses, grass-fed beef from nearby farms and so much more. The shop is brought to us by brothers Tom and Cavan Patterson; the pair has supplied regional restaurants with foraged and wild goods for years. They used Kickstarter, a service that allows community supporters to contribute pledges in exchange for creative paybacks (such as tickets to the launch event), to help make their new venture a reality.

Eden
In September, the opening of Eden was a dream come true for local vegans and healthy eaters. The restaurant, operated by executive chef Hilary Zozula, aims to deliver fresh food, working with local farms and purveyors to bring diners the cream of the crop. While Eden is technically classified as a vegan establishment (and features several raw-vegan items on its seasonal menu), it offers a wide range of dishes — gluten-free, vegetarian and meat — to cater to all patrons.

Cure
In late July, news quickly spread about Justin Severino’s unexpected plans to depart from Elements Contemporary Cuisine. Everything between Severino and his colleagues was fine — he just stumbled upon an opportunity he couldn’t resist: the chance to strike out on his own. He began to quickly prep the Lawrenceville space he purchased, hoping to open in the fall. Severino’s first official night open, however, was in early January, but locals were so thrilled that they didn’t mind waiting a little longer to try some of his charcuterie offerings (like mortadella and proscuitto). The menu lists a handful of starters and main dishes as well as a pair of sweet endings — all featuring the freshest locally sourced ingredients.

Winghart’s Burger & Whiskey Bar
After opening in January 2011, Zachary Winghart and his team — including his chatty chum, “Shipwreck” — instantly impressed patrons with their huge, tasty burgers (for starters, the meat is ground in-house) and perfectly crispy fries. In the fall, Winghart announced that’d he’d be opening a Warrendale location, one that’s larger than the downtown site and will offer liquor right off the bat. At press time, that location is scheduled to open sometime this month, while Winghart’s second eatery, located in South Side, was set to open by Jan. 31. With fresh ingredients and a friendly staff, there’s no reason why you shouldn’t venture north to try one of Winghart’s crowd-pleasers, like the Tallulah Hula burger with caramelized onions, pineapple, cheddar and barbecue sauce.