For one night only, Rocky Bleier is the featured back. 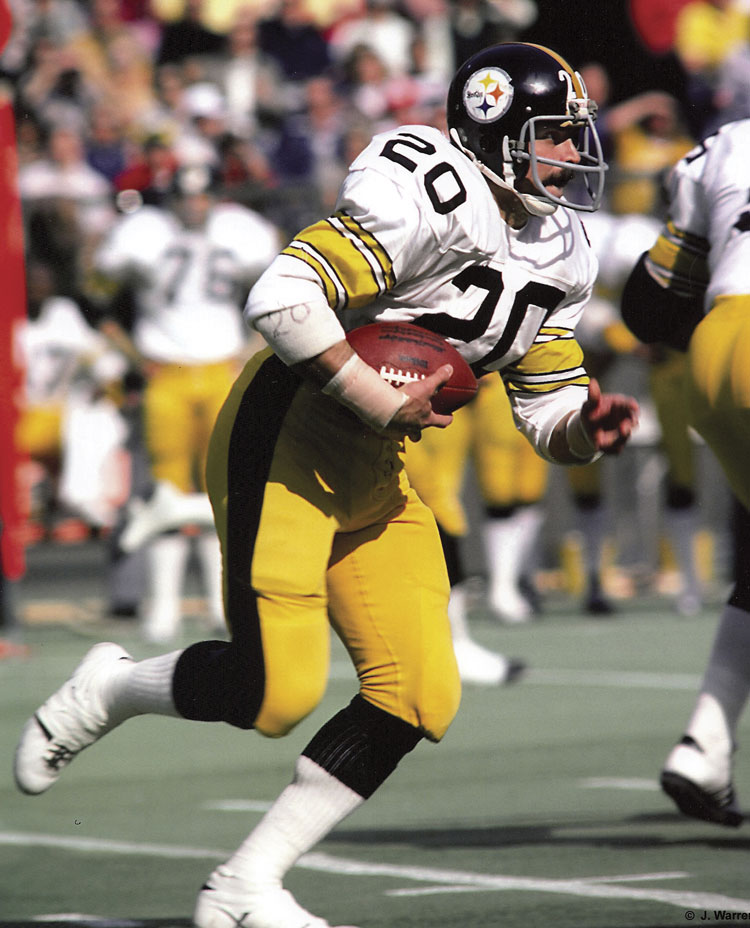 But Rocky Bleier, the former running back for the Pittsburgh Steelers, says the greatest game he ever played was against a neighbor in Appleton, Wis., when he was 9 years old.

“I scored 51 touchdowns,” Bleier recalls with pride. “It was a game of not only immense skill and will on my part, but I knew my opponent’s weakness … and his weakness was that he was 5.”

The story is one of many that are sure to warm hearts, inspire spirits and spur debate when “The Play with Rocky Bleier” receives its one-night-only world premiere on Sept. 15 at Heinz Hall, starring the charming Bleier as himself.

A natural-born storyteller, Bleier got the idea for the play when “Their Life’s Work” by Gary M. Pomerantz, which ESPN called the “definitive book of the 1970s Steelers,” was published in 2013. Thinking ahead to 2015 for the 40th anniversary of Super Bowl IX, Bleier began musing about telling the story from an insider’s perspective. “What was the Last Supper really like from an apostle’s point of view?” he asks.

He pitched the notion to his longtime pal and local producer, the late Maury Gable. Gable, who died Aug. 2, was instrumental in making the 1980 made-for-TV film “Fighting Back: The Rocky Bleier Story.” The film depicted Bleier’s unlikely return to pro football after a grenade in Vietnam nearly obliterated his right foot after his rookie season. Thomas Tull, CEO of Legendary Pictures (“The Dark Knight,” “Man of Steel”) and minority owner of the Steelers, signed on as the project’s executive producer. The team then approached celebrated Pittsburgh sports journalist Gene Collier to write the script. [Editor’s Note: Gene Collier is the father of Pittsburgh Magazine Associate Editor Sean Collier.]

Collier, along with playwright Rob Zellers, co-authored “The Chief,” the hit play about beloved Steelers owner Art Rooney Sr. The show proved to be so popular in this town that Pittsburgh Public Theater produced it nine times.

“That’s when the project took a 90-degree turn,” recalls Bleier. “Gene felt there was more to my own story that needed to be told.”

“Rocky’s is a great American story that encompasses all these kinds of iconic touchstones,” says Collier. “The Civil Rights movement, Notre Dame, Vietnam, the ’70s Steelers dynasty — he has been a part of some really big things.”

Inspired by the fact that Bleier and his siblings grew up living above their parents’ tavern, Collier set the play in a succession of three bars. In Appleton, Bleier recalls formative memories from childhood, his undefeated high-school career and his years at Notre Dame, where he played for the fabled 1966 national champions amid an era of civil rights protests.

Bleier continues his story in a neighborhood Pittsburgh bar as the Steelers’ 16th-round draft pick in 1968. “I lost more games in my first six weeks playing for Pittsburgh than I had in my entire career up to that point,” he recalls.

Adds Collier, “This wasn’t a bar crammed with Steelers memorabilia. In those days, you went to a bar to forget about the Steelers.” The segment also transports us to the battlefields of Vietnam and shows the benevolence of Art Rooney Sr., who helped to enable Bleier’s grueling rehab.

In a third bar in his current home, Bleier reflects on those glorious Super Bowl years, what it means to be a hero and the randomness of life. “I’m not a Bradshaw or a Franco. How does a life like this happen to somebody like me?” he says.

“I knew Rocky had made a second career as a public speaker, so one of the goals was to make this experience much different than if you saw him speak after a dinner,” says Collier. Adds producer Dan Fallon: “There are lots of projections involved, so we actually needed a space like Heinz Hall to accomplish what we wanted to do theatrically.”