The Mercer County company will introduce merchandise for every NFL team by the end of 2019. 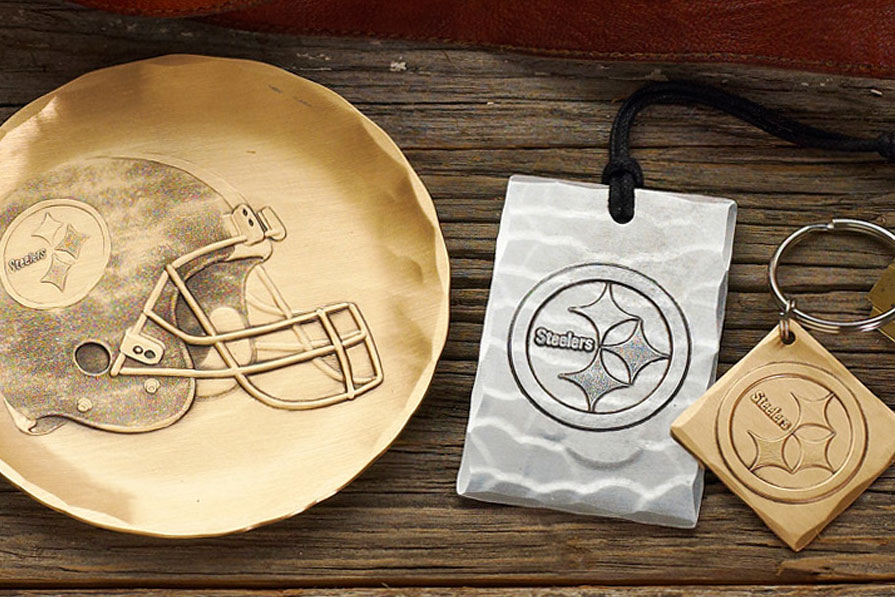 Wendell August Forge has announced a line of special products for NFL fans.

The Mercer County-based blacksmithing manufacturer has introduced new merchandise featuring the Pittsburgh Steelers and Cleveland Browns — and it’s the kickoff of a larger project. From coasters to keychains and more, each piece is hand-crafted and embossed with the team’s logo.

According to Wendell August President Christian Werner, the project will help the company become a “forge of the future.”

“Wendell August Forge has been in business for nearly 100 years, and this has been a strategic goal of our company for almost a decade,” he says.

While the company’s partnership with the NFL currently includes Steelers and Browns merchandise only, more teams are on the way.

“We were approved for an entire-league license. We’re going to be making for all 32 teams,” Werner says. “Because our items are meticulously crafted … we’re going to start with about eight to 10 teams. By the holiday season, we will be shipping all items throughout the entire country for all teams in the NFL.”

Other teams included in the first batch will be the Philadelphia Eagles, New England Patriots, Buffalo Bills and both the New York Jets and Giants, among others.

Werner, who stresses that the NFL license could bring more jobs to the company, says it’s the individuality of the Wendell August brand that earned it recognition from the NFL.

“They loved our product and the uniqueness of it because they’re very similar to snowflakes; no two are the same,” he says.

It’s an opportunity that almost never happened; in 2010, Wendell August’s manufacturing plant burned down, just days after receiving its largest-ever order, from the Pittsburgh Penguins.

“Right after that fire, the executives called me. They said, ‘We went through some tough seasons here at the Pens … but one of the things we want to make sure you guys know is that we believe in you, and we also want to help support you,’” Werner says.

The Penguins pre-paid for the entire order, even though the forge might’ve been unable to make it. Against odds, the merchandise — flat metal tickets — was produced. To this day, Werner cites the relationship with the team as the company’s saving grace.

“It shows how Pittsburghers support each other,” he says. “They gave us that rebirth opportunity.”

NFL merchandising will serve as another way for Wendell August to grow its relationship with not only customers in the Pittsburgh and Cleveland areas, but football fans internationally, as well.

Licensed NFL merchandise can be ordered on Wendell August’s website as it becomes available, or found in independent retailers and Hallmark stores nationwide.