New Contract for PSO is a No Go 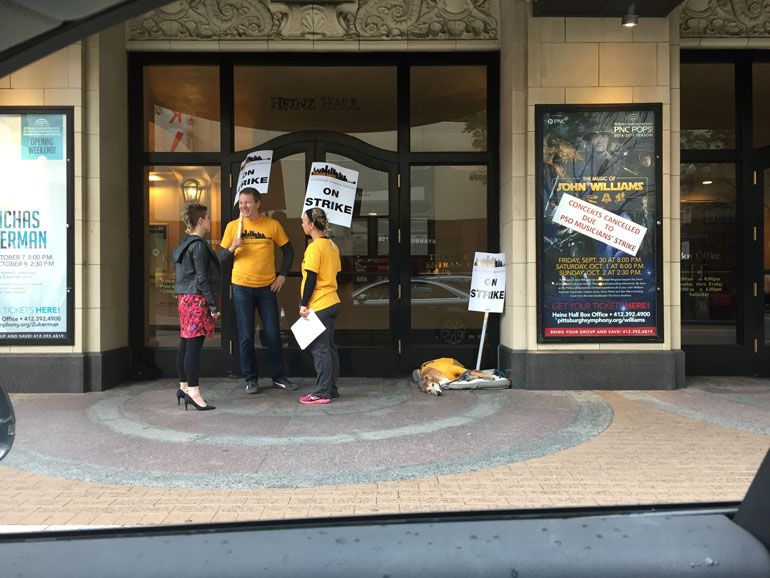 Photo by hal b. klein

The proposed three-year contract from PSI would have slashed the musicians’ base salary by 15 percent, cut pensions for the select players who received it and reduced the roster to a management-regulated size. Management believes that these cuts are necessary to maintain financial viability for the organization. The musicians, however, worry that such cutbacks could compromise the prestige of the orchestra.

The union unanimously rejected to proposed contract. The players began picketing in front of Heinz Hall around 9 a.m. on Friday. All wore black and gold T-shirts and distributed fact sheets to passerbys.

According to a report in the Pittsburgh Post-Gazette, this weekend’s concerts featuring “The Music of John Williams” have been cancelled, but Pittsburgh Symphony Orchestra musicians plan on performing free shows across the city on October 4 for a “Day of Music.” They will perform at 10 AM (Friendship, Hillman Cancer Center, Shadyside and Children’s Home of Pittsburgh), 12 PM (Fifth Avenue Place Downtown and Allegheny County Courthouse), 2 PM (Lawrenceville, Canterbury Place, Brighton Heights, Little Sisters of the Poor, Magee-Women’s Hospital atrium and Pittsburgh International Airport), 4:30 PM (Light of Life Ministries) and 6 PM (Hill House Veranda).