Neal Huntington and the Draft to Nowhere 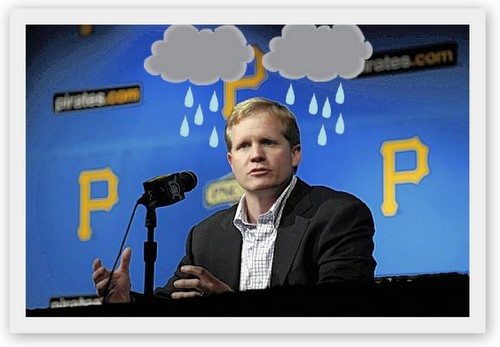 Editor’s note: Welcome to a special presentation of Pulling No Punches, written by our pal The Legend of Vincent Tremblay. He runs an awesomely thoughtful blog, and drops flourishes of knowledge on Twitter. Take it away, Vinny T:

During primary season in Pennsylvania this year, Anthony Williams, Democratic candidate for governor, ran an attack ad against his opponent, Allegheny County Executive Dan Onorato. In this ad, Onorato was criticized for backing the “Tunnel to Nowhere.”

The tunnel in question is part of the Port Authority’s North Shore Connector, which runs under the Allegheny River and will extend the T from Gateway Center to PNC Park, Heinz Field, the Carnegie Science Center and Rivers Casino. The entire project has been a political lightning rod for its priority over other public transit needs and for the decision to bore a tunnel under the river instead of building a bridge. (We’re pretty good at bridges here in Pittsburgh; we’ve had lots of practice.)

The attack ad used the actual phrase “tunnel to nowhere.” Makes it sound like the project has been abandoned, or maybe stalled half way under the Allegheny, doesn’t it?

Yet—politics and budgets aside—the reality is that the tunnel itself is complete, the extension is still under construction and is more or less on schedule to open in 2012.

Maybe that has something to do with why Onorato is the Democratic candidate for governor of Pennsylvania now? I’m not sure how that ad played Back East, but on Onorato’s home turf, I have to suspect it did more harm than good.

Now, I told you that story to tell you this one.

The venerable (and usually sensible) Pittsburgh sports blog Mondesi’s House has been jumping all over the Pirates front office, notably general manager Neal Huntington. It seems that Mr. Huntington has been accused of a grievous injury to the already wounded Bucco Nation: He has done his job as general manager of the Pittsburgh Baseball Club.

It’s one of the most thankless jobs in sports: PR manager for the White Sox, Bruce Pearl’s dry cleaner, Antti Niemi and Pirates GM.

The crux of Mondesi’s argument is that the Pirates are making a big deal about their recent amateur signings, most notably draftees Jameson Taillon and Stetson Allie and international free agent Luis Heredia, when signing those players should be considered business as usual.

This is precisely why Neal Huntington can’t win. Half of the sports opinion writers in town project the sins of former GMs Cam Bonifay and David Littlefield onto Huntington, and the other half rip Huntington when he defends himself from the first half.

Taillon, Allie and Heredia are examples of the types of moves Bonifay and Littlefield failed to make, or worse, refused to make.

Littlefield made a point of avoiding players represented by super-agent Scott Boras in the amateur draft. This is why, in Littlefield’s last draft in 2007, the Pirates passed up hot catching prospect and current Baltimore Orioles starter Matt Wieters for the more frugal option: left-handed relief pitcher Daniel Moskos. You get what you pay for. Moskos has stalled-out in AAA with an 0-5 record and a 10.38 ERA.

What’s past is prologue, and in some Pirates fans’ minds, perpetual, making the successes of the early ’90s seem prehistoric. But the recent dark age of a storied franchise shouldn’t be Huntington’s albatross.

Remember: Huntington’s first draft was in 2008, and he went right after a high-priced Boras client: Pedro Alvarez.

The Mondesi’s House post was published before the Heredia signing, but it uses Cuban defector and Cincinnati Reds pitching prospect Aroldis Chapman as an example. The Reds gave Chapman a 6-year, $30+ million contract after winning a bidding war with the Oakland Athletics. Chapman’s stock rose after some strong outings for the Cuban national team in the 2009 World Baseball Classic. It’s unclear why the Pirates didn’t pursue Chapman.

Money is an obvious answer for this notoriously stingy team, but the sorry state of the Pirates Latin American scouting system may have had something to do with it, too.

The Pirates have maintained an academy in the Dominican Republic for years. Until owner Bob Nutting took control of the team from Kevin McClatchy, though, “maintained” would have been a poor choice of words. The McClatchy regime neglected Latin America so completely that Nutting had to restart almost from scratch. Today, the Pirates have a rebuilt scouting staff and a new, state-of-the-art Dominican academy.

Huntington’s real problem is that he can only make the same promises Bonifay and Littlefield broke ad nauseam.

On one level, Mondesi’s House is right: This is standard operating procedure for a Major League Baseball franchise. It shouldn’t be a big deal. For the Pirates, however, it is a big deal. After years of cowering in fear of hard-bargain agents, the Pirates are once again pursuing the best players in the amateur draft. After years of cluelessness in Latin America, they are finding and signing top prospects.

The message to take away from these signings isn’t, “Hey, look! New pitchers!” but rather, “Hey, look! We’re gradually undoing the damage the last two GMs did over a 15 year span.”

Until this stockpile of minor league prospects becomes a winning team, though, the won’t-be-fooled-again media will continue to use Huntington as a punching bag under the guise of populist anger. And after 18 years of futility, there’s plenty of that to go around.

How many Five Year Plans in that span amounted to nothing? It’s Huntington’s lot in life, then, to be cursed for not completing his Five Year Plan in two years.

If only the Pirates had Onorato’s campaign manager … .