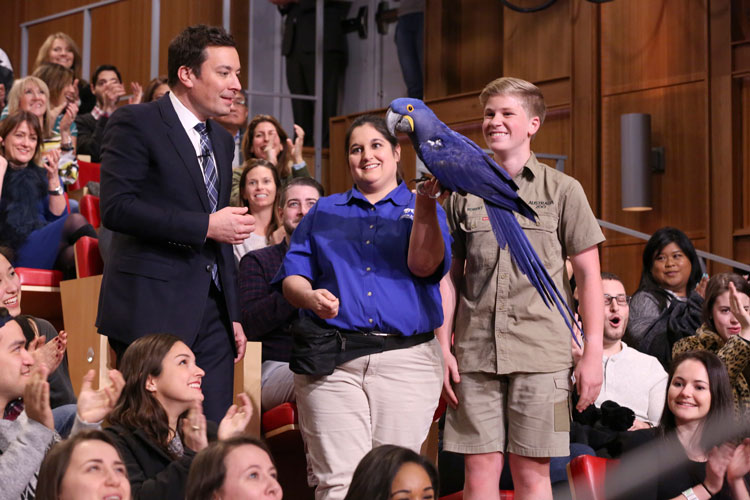 The National Aviary added one more episode to its string of appearance on “The Tonight Show Starring Jimmy Fallon” last week.

Tyler, a hyacinth macaw, put on a brief show for the audience, flying from the stage over the crowd during a segment with Robert Irwin, son of the late Crocodile Hunter Steve Irwin.

The 14-year-old Irwin introduced Fallon to Tyler and explained some of his features: A hyacinth macaw is the longest parrot in the world, and they’re as intelligent as toddlers. Also, while Tyler’s feathers appear dark blue, this is just due to the light hitting them; they are actually black.

“Is this one of those like, internet things like the black and gold?” Fallon joked. “I see blue and yellow.”

It was the fourth time the National Aviary, based on the North Side, has taken an animal to New York for a taping of “The Tonight Show.” Valentino, one of the Aviary’s sloths, has also appeared.

“It was great,” says National Aviary Director of Marketing and Communications Robin Weber. “Tyler performed amazingly. He did everything as he was supposed to.”

So what’s it like traveling with a bird to New York City?

“He’s just hanging out next to us in the backseat in a travel carrier … he’s been enjoying looking out the windows,” Weber says. “It varies which bird you’re traveling with.”