My newest enlistee in Operation Anti-Pigeon is the Pittsburgh Downtown Partnership.

The Pittsburgh Downtown Partnership (PDP) recently enlisted in my anti-pigeon army when the group began distributing "Don’t Feed the Pigeons!" postcards in the new Market Square.

The PDP has a vested interest in keeping Market Square clean because what was once a tree-dotted square filled with noisy, lumbering buses and riffraff (for lack of a better term) has become a trendy open-air expanse of cobble-stone roads and beautiful concrete (NOT an oxymoron, I promise you, and I’m not just saying that because—full disclosure—my husband and I own a restaurant in Market Square) where Pittsburgh’s downtown residents, workers and visitors can enjoy dining at any one of the numerous tables filling the square.

One thing that hasn’t changed from the old, yucky Market Square to the new, clean and inviting Market Square is the pigeon scourge. The pigeons know there is food in Market Square, and they know that if 50 people are eating, there is a good chance that at least two of those people will be "generous" enough to throw a few morsels their way; or downright crazy enough to plop down a giant bag of bird seed and spread it around like manna from pigeon heaven.

Well, pigeon-feeders, the PDP has some news for you: 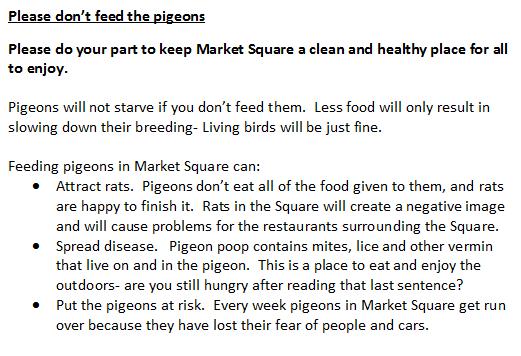 Let’s break this one down bit by bit.

1. Pigeons will not starve if you don’t feed them: This is because they’re mostly machine, and they don’t really need food. Don’t quote me on that. My science is iffy.

2. Pigeons attract rats: It’s bad enough that the rats of the sky are in the square, but could you imagine sitting with your friends on a bright sunny day enjoying a sub from Dibella’s or a burger from Winghart’s and an actual rat scurries by with a french fry in its mouth? Or can you imagine seeing a rat and a pigeon fighting over that french fry? On the plus side, I bet it’s easier to kick a rat than it is to kick a pigeon. Again, don’t quote me on that. I haven’t tested this theory. Yet.

3. Please put on your listening ears for this one: PIGEONS SPREAD DISEASE: Note the important words on the card: Mites. Lice. Vermin. That live on the pigeon. The pigeon is a vermin that has OTHER vermin living on it. Shudder.

4. Every week, pigeons in Market Square get run over because they have lost their fear of people and cars: Hee. OK, that last one’s just there for comedic effect, but still, the point is clear, Pittsburgh. Market Square is meant to be a clean, sanitary gathering place for Pittsburgh’s people. Don’t feed the pigeons, or it will turn into a dirty, vermin-riddled festering sore of filth and chaos.

At least if I was writing the postcard, that’s what it would say.

This article appears in the April 2011 issue of PittGirl.
Categories: PittGirl