My Favorite Room: The Hut that Feels Like a Treehouse

First-time parents Greg and Liz Dutton share their off-grid retreat in the nearby Ohio Valley. 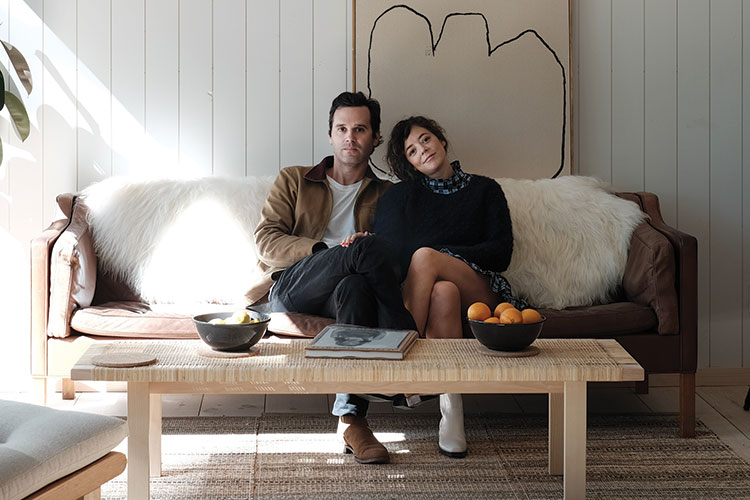 Architect Greg Dutton has found himself on both sides of the reality TV coin — both as an expert and as a subject.

The co-owner of Midland Architecture — which has offices in Lawrenceville and Columbus, Ohio — Dutton has appeared on both seasons of HGTV’s “Restored by the Fords” starring Pittsburgh-bred siblings Steve and Leanne Ford, the latter of whom Dutton has known since their college days. While Dutton attended Miami University of Ohio, Leanne was a student at Ohio University.

“I went to college with a couple of Leanne’s close friends from high school,” Dutton says, adding he also met up with Leanne when they moved to New York City, and then later when they both returned to Pittsburgh. “It’s been almost 20 years of following in the same circle of friends.” 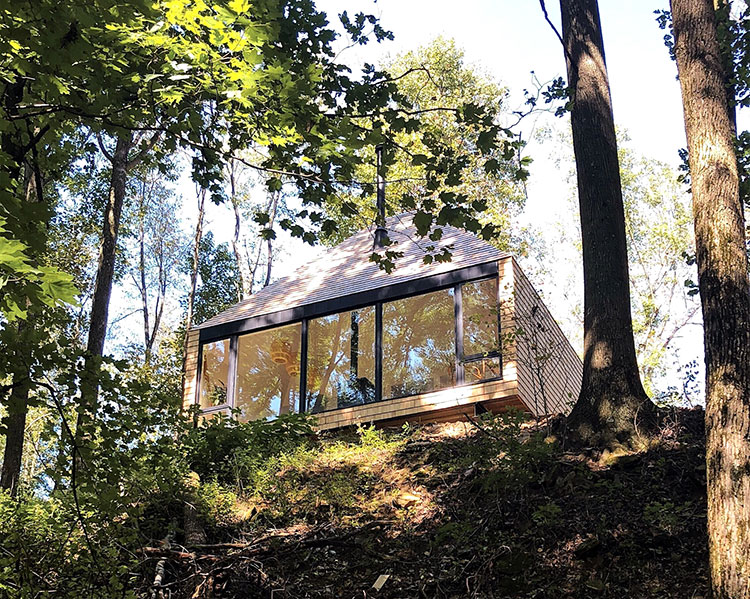 Fans of the DIY Network may also recognize Dutton from the February premiere of the second season of “Building Off the Grid,” which featured Dutton, his brother, Chris, and his dad, John — plus assorted family and friends — building one of his favorite places, a bucolic retreat in a forested area of his family’s 2,000-acre cattle farm in the Ohio Valley.

Dubbed “The Hut,” the secluded 600-square foot, off-grid cabin sits amongst the trees atop a high bank overlooking a lake. 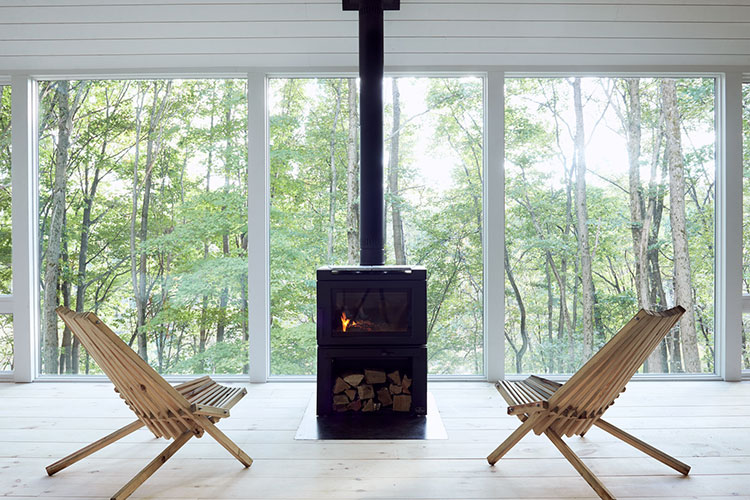 “The idea with that was to feel like you’re in a treehouse,” Dutton says. “The trees are 40 feet tall, and you’re looking at them from 20 feet up. It feels kind of like an Ewok village.”

The sustainably built structure, which is sided with cedar shingles, relies on solar power and collected rainwater. Besides being efficient — the space is heated by a single, wood-burning stove — it’s also beautiful, with a minimalist, open-floor plan that maximizes the stunning view of the outdoors. 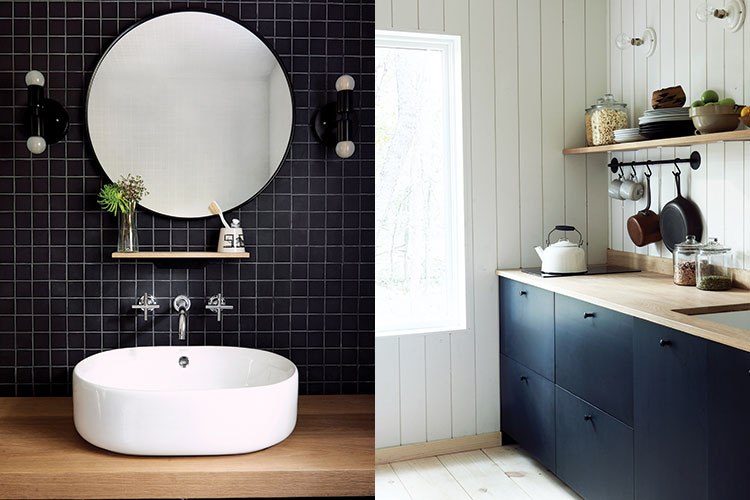 Consisting of one great room, with a separate space for the bathroom and kitchenette, The Hut’s true showpiece is the 25-foot-long wall of floor-to-ceiling glass overlooking the cliff. Because the front exterior is so unassuming, Dutton says the view when you enter the wooden building is an unexpected treat.

“It’s like you’ve entered into this secret door and you’re greeted by this big view,” he says. “The experience is kind of like coming through the tunnels in Pittsburgh — it’s a big surprise.”

Dutton and his wife, Liz Dutton, a product portfolio manager at Abercrombie & Fitch’s corporate offices in Columbus, designed the interior with a Scandinavian-inspired “hygge” mindset.

The walls are clad in white-painted wood panels — Dutton notes wood is more forgiving than drywall during weather fluctuations — while the floors are bleached, 10-inch-wide, Eastern Pine boards. 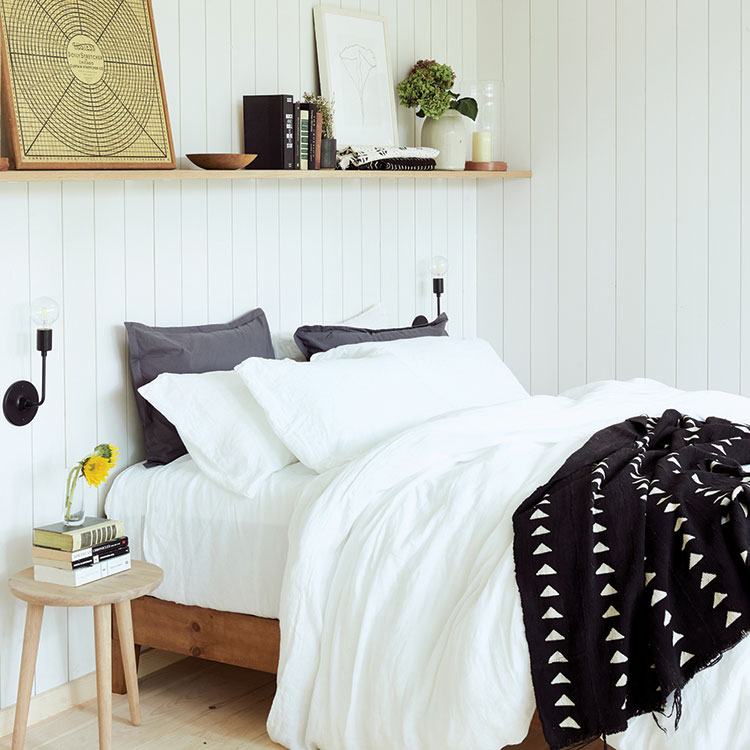 The furnishings are a mix of designer pieces, antiques and products from big-box stores. For example, while the sofa is a vintage find by Borge Mogensen, the famed 1960s-era Danish furniture designer, the coffee table is from IKEA. The countertops and shelving are by Ryan Smith, a friend of the couple who does fine woodworking. Mullet Cabinet in Ohio built the custom cabinetry Dutton designed.

“We wanted to create something that truly feels like you’re outside when you’re inside, and the material selection and design choices extended to that,” Liz Dutton says. “We did a clean palette and then used some warm wood tones. There’s a lot of natural finishes in the furnishing selection.” 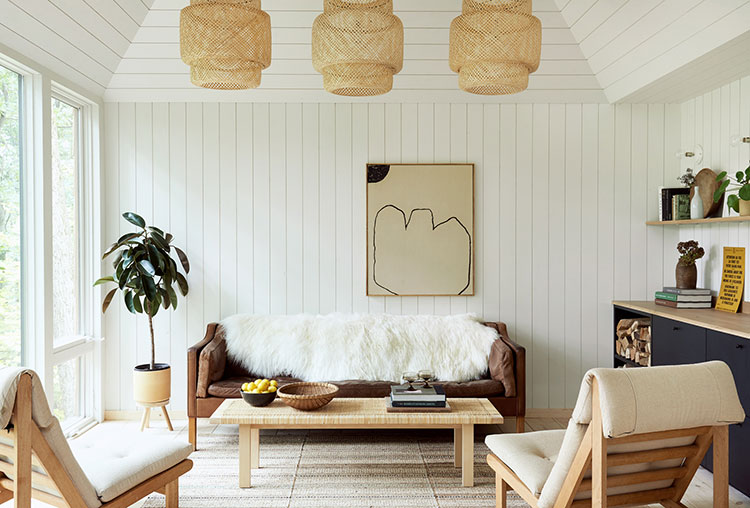 The serene space also was the perfect place to bring their newborn son, Shep, who arrived shortly after the Duttons finished The Hut last September. The couple spent time during Liz’s maternity leave living in the retreat, which had the added benefit of being near family.

“There’s nothing more pure than a new life, and then taking him into this space that also is meant to embody peace and serenity, it felt like they belonged together,” Liz says.

Building more cabins may be in the future. Dutton says his family hopes to build more structures on their property, with each cabin representing a separate room — such as bedroom cabins, a kitchen cabin and a communal cabin — and renting them to the public.

“We’re in the design phase now,” Dutton says. “Hopefully we’ll start on another one soon.”

Have a favorite room? Submit it to us: jsinichak@pittsburghmagazine.com

This article appears in the June 2019 issue of Home & Garden.
Categories: HOME + Design

Get 25% Off Restaurants with Good Eat$ Downtown

Time to Nominate for Best of the 'Burgh in 2021

Pittsburgh Pet of the Week: Red

How Social Media is Helping Pittsburghers Get Vaccinated

Perspectives: What the ‘Nutting Effect’ Means for the Pittsburgh Pirates

Reasons for Optimism Regarding The Pandemic in Allegheny County

Perspectives: Heart Health Awareness is Necessary to Save Lives

Pet of the Week: Smokey

Would You Stay in the “Silence of the Lambs” House?

Hot Property: A Bloomfield Loft with Amped Up Style

Perspectives: Why We Should Aspire to Trent Reznor's Style of Evolution

Photo Essay: The Stark Beauty of Presque Isle on Ice