PittGirl recounts her own nuptials, which involved hungry guests doing the step-clap ... but not a single ladylock. 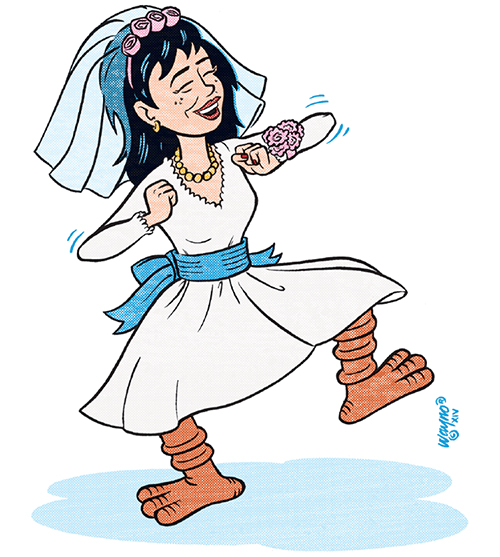 While the bridezillas of the world hold fast to their wedding-day mantra of “If something goes wrong, scream until the exorcist arrives . . . or you get your own reality show,” more-rational brides have this philosophy: “Something will go wrong; be prepared.”

The priest is late, an usher rips his tux, the ring bearer evacuates his breakfast, the cookie table collapses under the weight of 700 dozen homemade goodies, the groom smashes the cake so far up the bride’s nostrils it comes out her ears and she’s sneezing cake bits all honeymoon long. . . It happens. Be prepared.

Then there was my wedding in Cancun, where my Mexico City-born and –raised husband was living. It’s much harder to be prepared when you’re facing the cultural curve balls of an international wedding.

I’ll allow for a moment of silence.

Mexican cookies aren’t nearly as delectable as those fat-depositing goodies found at a ’Burgh reception, so unless I was planning to sneak 100 dozen frozen lady locks, buckeyes and pecan tassies past customs officials, I had to tamp down the erupting bridezilla and accept that there would be no cookie table. We had cake.

Second, here in Pittsburgh, we like to see the bride and groom kiss. We request it at the reception by tapping our silverware against our glassware until other wedding guests join in and the newlyweds no longer can ignore the doorbell. My family and the other Americans in attendance attempted this just as the reception was getting underway — dinner not yet served. They tapped and tapped, the melodious chimes filling the ballroom. The Mexicans looked shocked. My new husband shot me a look.

“What?” I asked innocently. “They want us to kiss.”

Finally, are you aware that as a general rule, Americans don’t know how to dance? Yet we love to try, especially at weddings — where we get to whip out such classics as the Chicken Dance, the Bunny Hop, the YMCA, the Hokey Pokey and the Electric Slide. My sisters and I were raised before grinding and twerking smote the people of Earth. We were raised during the side-step era. Side-step. Clap. Step. Clap. Join in when you know it. Step. Clap. Step.

There at my reception, my father was on the dance floor just kind of marching in place, my mom and her friends were trying to twist themselves right through to China, and my four sisters were all earnestly committed to the step-clap.

The Mexican men watched this display of American artistry with good humor for about five seconds. Then they grabbed their women.

While most Americans are born with the musicality of Pee-wee Herman, every Mexican alive was dancing intricate tangos with their umbilical cords while still negative years old. They’re born with the fire, passion and rhythm of Latin music in their veins.

The Mexican couples scorched the ground around the circle-dancing Americans with hot, pounding, perfect salsa rhythms. Their feet were blurs. Old and young — they spun and dipped with nary a clap in sight. My dad kept marching, my mom kept twisting and my sisters kept step-clapping as if there weren’t 5-year-olds literally dancing circles around them.

I thank God the disc jockey was unable to fulfill a request for the Chicken Dance. I don’t think I could have easily explained why the Americans were on the dance floor acting like drunk poultry. My husband probably would have said, “Here in Mexico, when you act like a chicken, it means you hate everyone in the room.”

I adored my wedding. At the same time, lucky are the brides who marry here in Pittsburgh, where you’ll have a table with enough cookies to feed the population of Delaware, your guests can request a post-nuptial kiss without accidentally demanding a slab of meat and the DJ will at least know what the Hokey Pokey is — or, as our DJ called it . . .

This article appears in the February 2014 issue of Weddings.
Categories: Bridal Buzz