Must Watch: Goosebumps on a Scale of One to OH!

The Pittsburgh Symphony Orchestra's YouTube search for a new soloist is down to the final four. 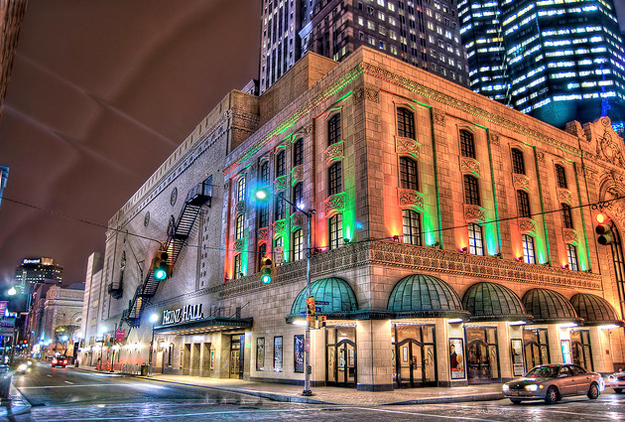 My childhood was spent trying to convince various music teachers that I had indeed practiced my songs at home, despite the fact that my attempts at playing "The Entertainer" were no better than they were the week prior. In all honesty though, classes were practice, because that was the only practice I got.

I took six or seven years of piano with Mrs. Matta, an elderly lady who would get so frustrated with me that she would slam my fingers down on the correct keys each time I got it wrong. I got it wrong a lot. I'm surprised I'm not crippled. I'm surprised I didn't just give in and practice to save myself from the pain.

Three or four years of violin with Miss Hackett. I put the EEK! in screechy.

Now as an adult, I regret not practicing regularly, because maybe then I would have become skilled enough to take part in the Pittsburgh Symphony Orchestra's first-of-its-kind online YouTube competition to find a new soloist to play with the world-renowned orchestra, complete with a $10,000 prize. The winner will then have their debut performance conducted by Manfred Honeck. That the symphony is using this method to find a soloist has been widely covered in media outlets all over the country.

The symphony very recently narrowed down the submissions to these four finalists after a public vote.

First is Benjamin Wagner, a student at USC, on piano playing Beethoven's Piano Concerto No. 3, which is over nine minutes long. The only thing I can play on the piano for nine minutes without sheet music is scales. I love the Josh Groban vibe he's giving off.

Also playing Beethoven's Piano Concerto No. 3 is New York City's Manon Hutton-Dewys. I bet she never had her fingers jammed into the keys.

The third finalist is Angela Park, a 25-year-old cellist who lives in Berlin. I know absolutely nothing about the cello but I do know that cello music has never given me chills before. Until now. If you want record-breaking goosebumps, check out 4:41 in. You'll want to write a movie just so you can set a scene to that music.

And finally, you have Salt Lake City's 19-year-old William Hagen playing Brahms Concerto on violin. And here's the odd thing: It says he is unaccompanied as he plays, but he somehow manages to make it sound as though you're hearing an entire orchestra coming from his fingertips. It's unreal. And I don't think I've ever used the word unreal in writing before. It’s so good, it’s is unrealistic.

In June, these four will have a live audition in front of Manfred Honek to earn the coveted spot and prize money. I know who I'm rooting for, but I'm not saying it, should I jinx them. Who’s got your vote?

If you'd like a fifth option, I could play the theme from Star Wars on my kid's recorder for you.

I will nail it.

This article appears in the May 2012 issue of PittGirl.
Categories: PittGirl