PittGirl writes a very special love letter ... to a house. 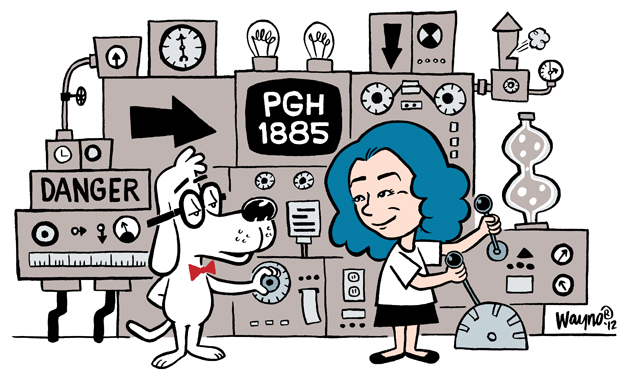 This is the first letter I’ve ever written to a house. Sure, I’ve composed open notes to inanimate objects before — fuming screeds to the Squirrel Hill Tunnel, affectionate prose to Nutella and heartbroken eulogies to the Civic Arena … and Zima.

But you and your turn-of-the-century ornate glory, your gilded wall coverings and your many splendors of long-ago Pittsburgh wealth have me sitting here wondering how we managed to get to 2012 without inventing time travel. What a huge disappointment science has been to me.

Don’t get me wrong. I love the idea of living in the late 1800s, but in actuality, the thought of going through life without necessities like K-Cups and depilatory cream is enough to give me a panic attack. I just want to visit.

I’m a romantic — a closet romantic, I should say. If I had the time, I would read historical romance novels until I unintentionally began talking like Jane Austen.

“Indeed, I fear my romantic nature is quite overwrought … Mr. Darcy.”

Anyway, Clayton, when I stepped through your doors and into your entryway, I was no longer a regular 21st-century gal taking a tour of a 19th-century house, where one of the nation’s richest families once resided. Instead, I was so fully absorbed in my imagination that I could see myself calling on Mrs. Frick for a social visit. I imagined the butler leading me into your parlor to await your mistress as I sat with my back straight, my pearl-adorned dress smoothed just so. Later, I would remark to Mrs. Frick about the beautiful sculpture of Martha. I would then offer her my sincerest sympathies on the loss of a child so young and so cherished. I would …

While the other members of my tour group took in the big picture, scanning the rooms with generous sweeps of their gazes, I was absorbing every single inch of your space. I imagined myself as a young belle gracefully descending the stairs to greet a visiting suitor. My gaze down. My demeanor coy.

I marveled at the delicate, expensive custom-china and crystal set out for an everyday breakfast.

I could almost smell the cigar smoke wafting up from a late-night poker session with George Westinghouse and Andrew Mellon. I wondered what sorts of jokes were tossed about, as bluffs were called and scotches were sipped.

It took every ounce of my self-control not to run my hands across the beautiful velvet dress that Adelaide Frick had once worn. I imagined myself wearing it while being swept effortlessly across a gleaming ballroom floor while the orchestra played on.

“I own that this music is quite agreeable, is it not … Mr. Darcy?”

I wondered what secrets you held. Were the Frick children ever rambunctious? Did they ever break anything valuable? And how does one teach a child to drink from a crystal goblet? I mean, really, how did people raise children before the invention of sippy cups, Clayton?

As I read the spine of every book I could in Henry’s library, I wondered, What was he like behind the beard and cold eyes?

As I walked through the bedrooms and the kitchen, I tried to imagine you filled with family and love, activity and laughter, and tears and music, and not just as you stand now — a quiet house filled with beautiful relics of Pittsburgh’s past.

I’ll never know all the secrets you hold within your walls, but your restored state allows us to take a small peek at what life was like for the Fricks more than a century ago.

And until they invent time travel, my imagination and your treasures will have to be good enough for now.

“It would be a most agreeable evening to stroll the grounds, would it not … Mr. Darcy?”

This article appears in the April 2012 issue of Pittsburgh Magazine.
Categories: From the Magazine, Hot Reads, PittGirl