PittGirl explains why there's no mom quite like a Pittsburgh Mom. 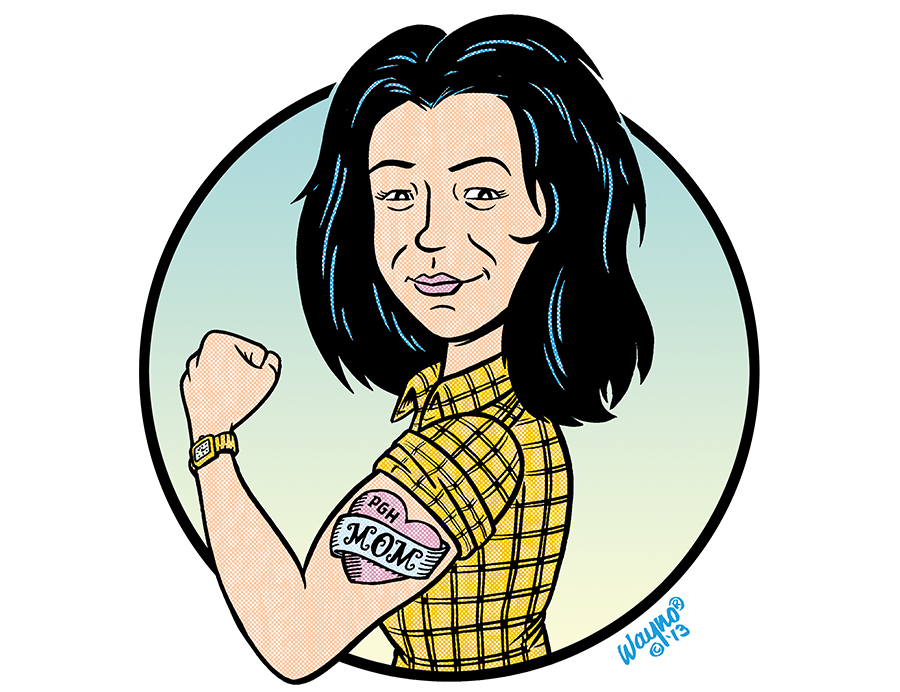 My father spent my childhood years commuting to downtown Pittsburgh in a wood-paneled, boat-like station wagon that today’s hipster would madly covet. My mother’s jaunts to town, however, were limited to dragging my four sisters and me to the basement of Kaufmann’s department store to fill the back-to-school wardrobe gaps left by our money-saving Hills sprees.

We’d pile in the station wagon with Mom at the wheel; her grip tightened as we got closer to the Parkway East. When the front tires hit I-376, she’d visibly tense and quickly turn off the radio. This was her unspoken demand that we give her absolute silence, as if she had been piloting the Millenium Falcon at warp speed through an asteroid storm.

Our conversations about the latest episode of “Greatest American Hero” turned to hushed whispers. There was no whining about elbows in ribs or bothersome jelly-shoe blisters. While we painfully swallowed our sneezes, our mom drove with her chin hovering 3 inches above the steering wheel and her hands locked in a death-grip. She’d hold this position until the wagon was safely parked — which is when she’d exhale and revoke the sacred Writ of Silentium Absolutus.

I didn’t appreciate it then, but I can see it now for what it was: My mother was doing something far outside of her comfort zone so that her girls could have nice clothes (that didn’t scream, “Five kids. One job. Hills is where the toys are.”).

That’s my Pittsburgh Mom. A woman who forewent a new winter coat for years so that we didn’t. A woman who chose to laugh instead of cry when she and my father took us to Long John Silvers for dinner, only to discover the checking-account balance was $12.

My Pittsburgh Mom is a woman who, when the latch broke on the station wagon, drove it with her arm tied to the door with rope, holding it shut as she rounded bends. No Kennywood ride could rival our adrenaline-pumping car trips, during which we would worry that Mom was going to tumble out of the car at any given moment.

She’s a woman who instilled in us a love of Pittsburgh sports — a woman who provided the construction paper and instructions on how to make black-and-gold pom-poms. And for that matter, a woman who could talk smack about every quarterback from Terry Bradshaw to “that idiot” Bubby Brister. A woman who made sure there was always money for Kennywood outings, even if it left a mere $12 in the bank.

A woman who, when our dog was hit by a truck right in front of us while we waited for the school bus, ran down the road in her robe with her hair sticking straight up, scooped up the injured dog and hopped in that stranger’s truck to rush to the animal hospital — but only after reassuring us everything would be fine and putting us, sobbing, on the bus. She really meant it when she’d say, “The only way you’re not going to school is if I’m in a coffin.”

If I had to sum her up in one word, I’d go with “sacrifice.” Sacrifices we may never fully know. Sacrificing time, money, sanity and sleep. Sacrificing time to cook the spreads for Steeler Sundays. Sacrificing money to send her kids to Kennywood — or college. Sacrificing sanity as she tries to be all things to all people, deals with our drama and puts up with our Pittsburgh Dad’s ridiculous demands. Sacrificing sleep as she nurses us to health, worries for us, prays for us and hopes for all good things for us.

While your Pittsburgh Dad is teaching you about the ground game, utility conservation, parking-chair laws and grilling outside in February, Pittsburgh Mom is teaching you how to be simultaneously tough and gentle, why being kind pays off, why sacrifices are worth it — and why it’s never wrong to cheat on your diet with ladylocks.

That’s my Pittsburgh Mom. Don’t let another month pass without defining yours.

This article appears in the May 2013 issue of Pittsburgh Magazine.
Categories: From the Magazine, Hot Reads, PittGirl