The first skyscraper on Liberty Avenue had 17 floors plus a top floor that was the subject of risqué rumors. 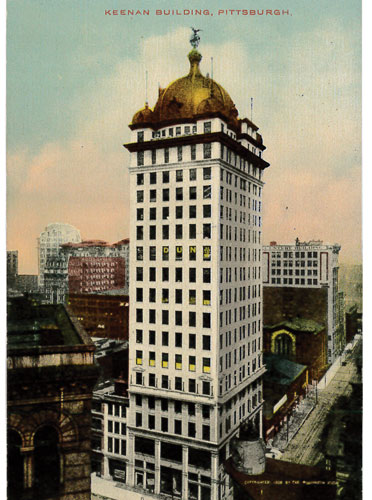 In 1908, when reporter Gertrude Gordon flew over Pittsburgh in a hot air balloon, one landmark immediately caught her eye. The Keenan Building, she wrote, was “conspicuous because of its huge gilded dome.” Though the roof of the skyscraper now known as Midtown Towers was painted red long ago, it still crowns one of Pittsburgh’s most distinctive high rises. 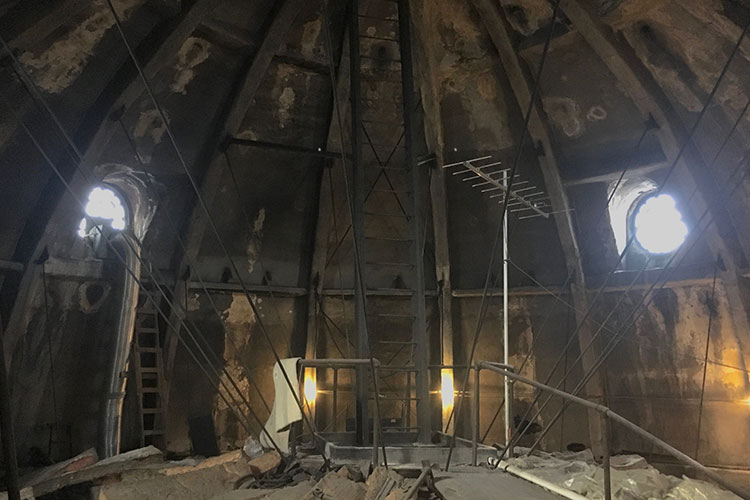 Thomas Keenan Jr. was the 24-year-old city editor of the Pittsburgh Times in 1884 when he rounded up investors, bought the paper he worked for and relaunched it as the Evening Penny Press. Five years later, he and a team of three reporters with the now-renamed Pittsburgh Press were among the first on the scene covering the Johnstown Flood.

As his paper’s circulation grew, Keenan mastered publicity. The Press sponsored a bicycle race team and a regatta and raised money to build a home for orphan newsboys and erect a statue of Stephen Foster, which now has become too controversial to remain on display. It also organized a military-style drill team, The Press Cadets, whose members enlisted en masse for the Spanish-American War, earning Keenan the rank of lieutenant colonel in the National Guard. 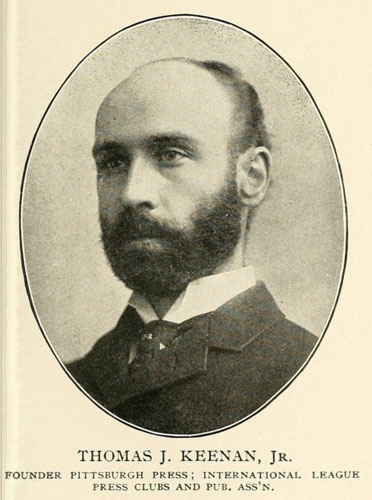 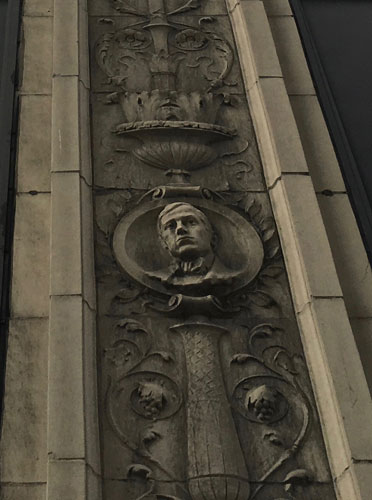 Keenan promoted composer Stephen Foster with this bas-relief likeness (right) on his building and a public statue that has recently stirred controversy.

Keenan sold the Press in 1901 and invested his profits in Downtown real estate. In 1907, construction began on his 18-story office tower, the first skyscraper on Liberty Avenue. When it opened the next year, it featured bas-reliefs of important figures, including the mayor, governor and president — plus the head of the chamber of commerce (the organization moved its offices into Keenan’s building). 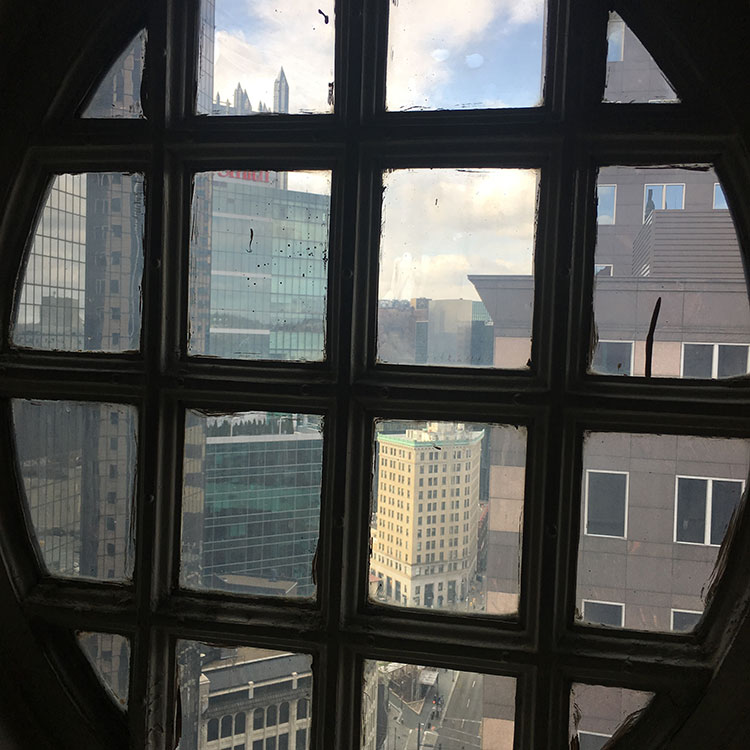 View of Liberty Avenue from the long-vacant 18th floor.

The former newshound then dove into political causes, leading a crusade against city hall corruption. Perhaps the rumor about Keenan, which still persists, was started by a political enemy; gossip claimed that the top floor was Keenan’s bachelor pad penthouse and a sordid den of fornication. It is true that hundreds of women went up to the 18th floor, but they weren’t going to see Keenan — a secretarial school operated there from 1923 until 1951.

The original tenant under the dome, a photo studio, went bankrupt after a year, and the space was occasionally rented out for banquets until the school moved in. Keenan, in fact, had a house in East Liberty and later moved to Girard, near Erie, where he died in 1927, still single. 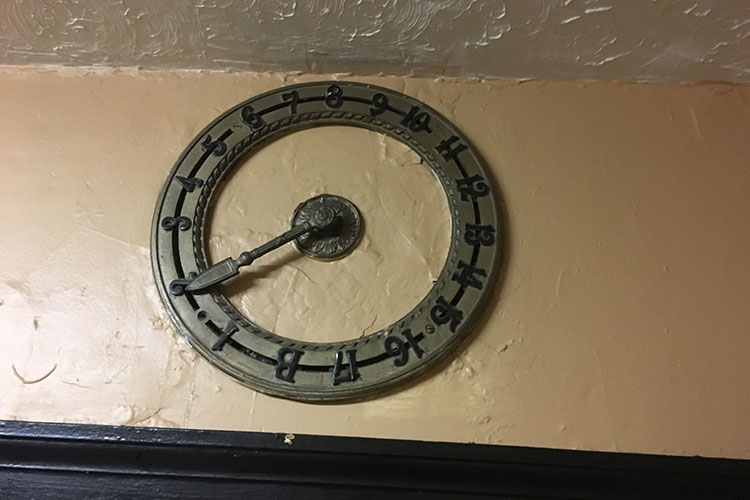 His building changed hands repeatedly but stayed an office tower until 1971, when it was converted into federally subsidized housing and renamed Midtown Towers.

Last May, a seven-alarm fire there killed one elderly woman and forced the other tenants out. New owner Beacon Communities is gutting and renovating the interior with plans to reopen late next year with a new sprinkler system. They also may turn the long-disused and unfairly maligned 18th floor into a shared space for tenants. 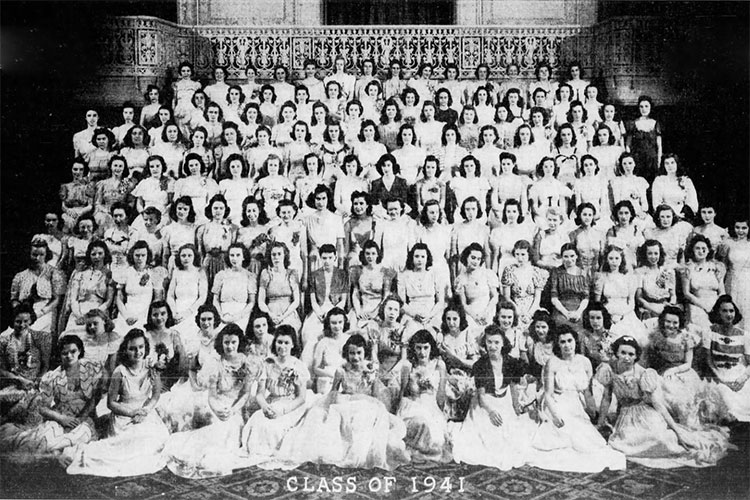 A secretarial school long occupied the top two floors, but never a penthouse, contrary to rumors.

This article appears in the June 2018 issue of Pittsburgh Magazine.
Categories: Community Feature, From the Magazine