Mrs. Thompson’s Pies has been serving up little goodies since the 1940s.

I first saw Mrs. Thompson’s Pies on the front counter at Groceria Merante in Oakland. They’re little pies about 4 inches in diameter, baked and sold in small aluminum-foil pans. Each is wrapped in a small wax-paper bag decorated with Asian designs, obviously intended for egg rolls for takeout, but cleverly repurposed here. Each bag is sealed with a single piece of Scotch tape like a present.

A bright yellow and red label on these packages says these are “Mrs. Thompson’s Pies,” underscored by a line that states simply, “Southern Style Pies.” Then the flavor is spelled out in big letters—like APPLE, which I’ve tried. I’ve also sampled the peach and the sweet potato. All quite good. Julie Merante told me that her favorite is raisin, but it’s a specialty and not available every week. 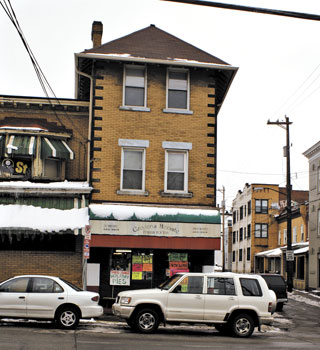 Julie and her sister Filomena have run their corner grocery on Bates Street since the 1970s, and their mustachioed Uncle Salvatore used to have a store on Marion Street in the uptown neighborhood near Mercy Hospital. He sold Mrs. Thompson’s Pies for as long as he can remember, at least since the early 1950s.

The Merantes continue to get fresh pies, usually on Tuesday afternoons, delivered by an older gentleman they call Tommy Thompson, although I found out his real name is Rollins Thompson. He’s the son of the pies’ namesake, and he makes these pies at his Thompson’s Bakery in the Lincoln Park neighborhood.

One afternoon, I talked to Charles Thompson, one of Rollins’ children, who said the business was 65 or 67 years old—they weren’t sure—and it had had its ups and downs like many small business. For a while, he said, they baked a lot for A&P Supermarkets.

Christopher explained that “Mrs. Thompson” was Lucille Thompson, who moved to Pittsburgh from Wilmington, N.C., and started baking pies here in the early 1940s. Uncle Sal at the Groceria Merante told me that he remembers when she used to deliver the pies herself from a station wagon every week.

I love the way the pies are perfectly baked, each in its little foil dish, but they easily pop out and can be eaten like a big filled cookie. They are a tasty little piece of Pittsburgh history, usually sold for $1.09 apiece at Merante’s.

This article appears in the February 2010 issue of Pittsburgh Magazine.
Categories: Rick Sebak