Move over, Man Cave – See What's Inside a “She Shed”

When author and interior designer Sherry Savage feels a need to get inspired, she heads outside to her “She Shed,” a cozy writer’s abode located just steps from her door. 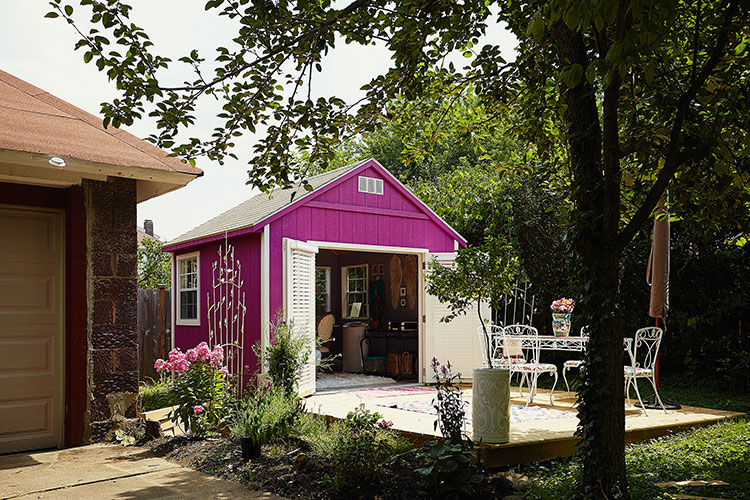 As both an interior designer and fiction writer, Sherry Savage is constantly seeking inspiration from the world around her.

To guarantee she’d always have a space that ignites her creativity, she opted to design one. The author of the “Lydia’s League of Angels” series tapped into a growing trend and worked with JDM Structures out of Millersburg, Ohio, to design her “She Shed,” a 10-foot by 10-foot writer’s abode that sits behind her McKeesport home.

“There’s something about going to that little world that’s all yours,” says Savage, a native of the south who splits her time between the Pittsburgh area and Lexington, Ky. “You leave your house, and literally it’s maybe 20 steps away, but just changing the environment and getting into your own space clears the mind.” 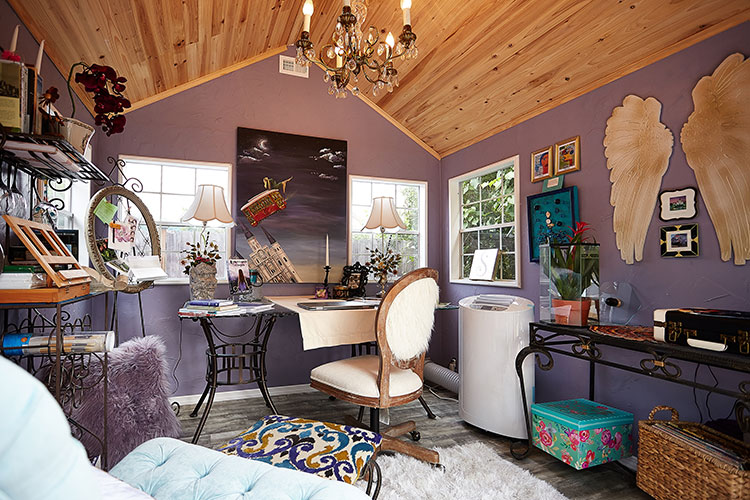 The shed is where Savage, who writes under the pen name S.G. Savage and also has an extensive background in social work specializing in advocating for victims of sexual abuse, escapes to write her tales centered on heroines fighting sex crimes against women and children. She’s currently working on the third installment of the five-book series.

Her shed is a strict “no cell phone” zone and no one — not even her two beloved Great Pyrenees dogs — is permitted to disturb her there.

“It’s refreshing and relaxing,” says Savage. “I light my candles. I play vinyl on my turntable. It’s amazing back there. It’s tucked away and you just feel like you’ve gone to your space. There’s not going to be any interruptions.” 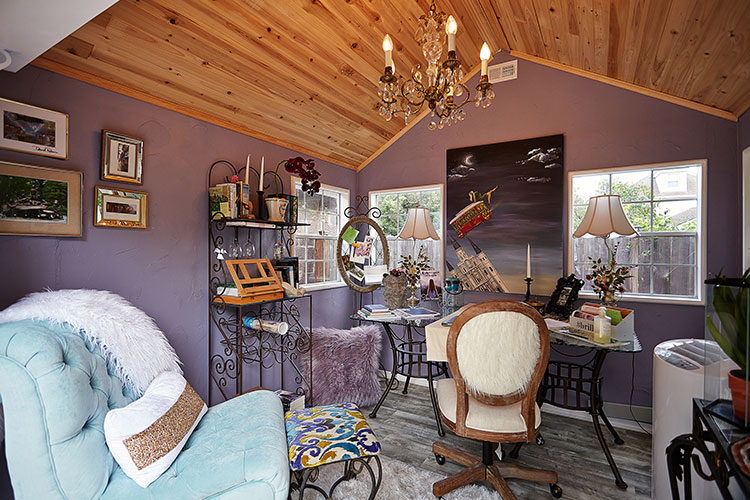 In her other role as an interior designer, Savage noticed the She Sheds trend gaining popularity but wasn’t convinced she needed one of her own until seeing some “tricked out” models at the Pittsburgh Home & Garden Show in 2016.

The space’s focal point is an oil painting Savage bought in New Orleans by artist Weslyn Towle. The piece depicts a woman perched on the roof of a trolley as it soars past a church and up into the night sky.

It hangs above a wrought iron and glass table — a display piece from the old Horne’s department store — that serves as Savage’s desk and holds various items of inspiration, including photos, books and a set of vintage lamps with flowers sprouting from the base.

Despite the diminutive space, Savage created vignettes, among them glittery wooden angel wings that float over her ’70s-style turntable and a wine storage/bakers rack that houses glassware alongside copies of her books and several other favorite titles. 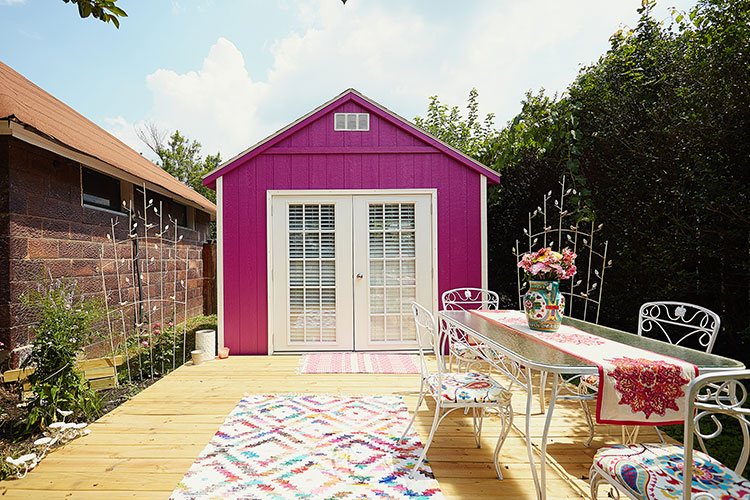 Inspiration is squeezed into every inch of space, even the small shelf above the doorway where black-and-white “Alice in Wonderland” prints rest alongside taper candles and a small topiary.

A deep lilac coating the walls could have made the space seem cramped, but the tall ceiling and abundant natural light from the four windows prevent any such feeling — which is a good thing, as Savage is claustrophobic.

She often works in the shed until late at night and, thanks to the insulation and electrical work her husband, Eric Piersol, did when finishing the shell, is able to use it year-round. Piersol also built a small deck off the front for an outdoor seating area.

Using the shed these days is bittersweet for Savage, who will likely have to part with it when the couple sells their home. They intend to put in on the market this summer to find something closer to Piersol’s job with Plus Computer Consulting in Carnegie.

Though she might have to leave her shed behind, Savage doesn’t see the trend going anywhere, as more and more people seek smaller spaces both for work and for living.

Rose Kleidon, executive vice president with Kleidon & Associates, a marketing consultant in the shelter industry that works with JDM Structures, agrees. She’s seen She Sheds used for everything from potting sheds to wine bars, exercise spaces, art studios, tea houses and as meditation spaces.
With more people working from home these days, using a shed as a home office is also becoming increasingly popular, Kleidon says. It allows people to add additional living space without the hassle of undergoing a major renovation project — and the customization options are endless, she says.
“People can do it their way — Sherry’s is a great example of that,” Kleidon says. “You don’t have to compromise.”

For more information on Savage’s book and design services, call 859/583-8007 or visit sgsavage.com. 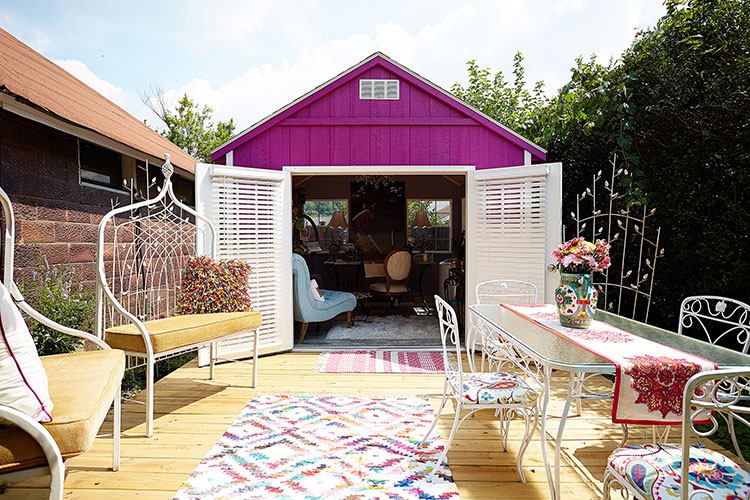 Move over, Man Cave. Claiming a unique space all their own is no longer just for the guys. As more women are seeking sanctuaries for themselves, the She Shed is becoming a popular option in backyards across the country.

Used for everything from reading spaces to artist havens, She Sheds are small structures — typically around 10-foot by 10-foot, though they certainly can be bigger — and often designed around whatever purpose the lady of the house has in mind.

Whether rustic, refined, shabby-chic or crafty, the decor of a She Shed has no limitations. As long as it inspires serenity and allows its occupant to get a little space and distance from the daily grind, it’s allowed in this peaceful space.

Think a She Shed sounds great but not quite sure where to begin? Pinterest has plenty of ideas to set you on the path to having one of your very own.

This article appears in the June 2018 issue of Home & Garden.
Categories: HOME + Design