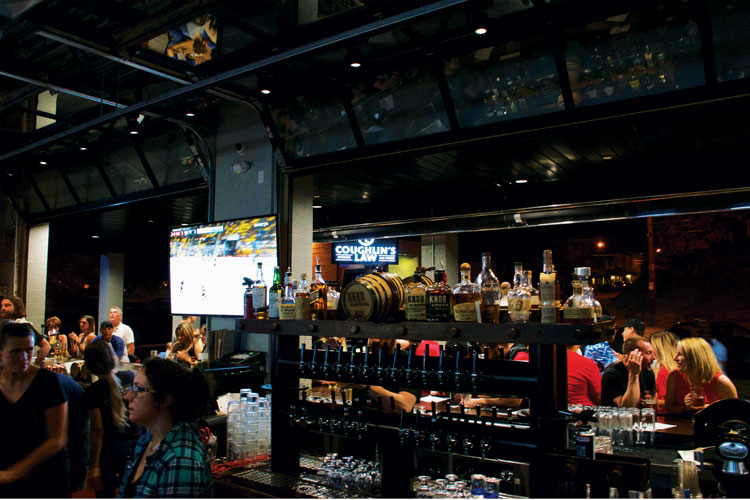 The adage “If you build it, they will come” may be true of ghostly, midwestern ballfields, but it is far from a guarantee for bars and restaurants. Many well-intentioned projects die on the vine for a lack of attention — which made the opening of Coughlin’s Law Kitchen and Ale House remarkable.

Built on the site of a former Mount Washington gas station, the gastropub experienced some setbacks during construction and development; the sign out front reads “Est. 2017,” but the doors didn’t actually open until this April. When they did, however, Coughlin’s Law bucked even its owners’ expectations by attracting a capacity crowd in its debut weekend.

“I think we got the perfect storm,” says Tracy Molyneaux, one of the bar’s owners. Some of the delays in opening, she believes, served to “make it more and more intense for the people who were pumped about it,” including neighborhood residents curious about the new spot. The grand opening also happened to coincide with the first warm weekend of the year; half of the seating at Coughlin’s Law is outdoors, some of it with a view of the Downtown skyline.

The bar, which is named for a character from the movie “Cocktail,” specializes in mixed drinks and creative pub-grub — the elaborate presentation of a signature burger involves a glass dome and a cascade of smoke — and immediately cemented itself as a top nightlife option atop the mountain.

Molyneaux also believes that Coughlin’s Law serves as a more grown-up alternative to the owners’ other establishment, the South Side mainstay Carson City Saloon. “A lot of the original customers we had [at Carson City] now are married, have graduated college … they’re more settled down,” she says, citing old regulars who popped up at Coughlin’s Law in the first week of business.

The organization now known as Jump Cut Theater was born out of a tough position: They were a movie theater without a movie theater. Formerly known as the Friends of the Hollywood Theater, the nonprofit organization had operated the Dormont cinema until an unexpected sale to the Theatre Historical Society of America early this year. Jump Cut was committed to continuing its programming — unfortunately, you do need a screen if you want to show a movie.

The decision: To take their programming on the road.

The group decided to serve as a roving cinema, bringing events and screenings to communities eager to host them. Jump Cut quickly announced a series of events in nearby Carnegie. Jump Cut’s Original Breakfast and a Movie series will pick up at the Andrew Carnegie Free Library & Music Hall in Carnegie; this month, a Father’s Day edition will feature the original “Ocean’s 11” from 1960, to coincide with the release of “Ocean’s 8” a week prior. (A Sunday-morning series is also ongoing at the Hollywood itself.)

Also this month, Jump Cut will host Frank Conniff and Trace Beaulieu of “Mystery Science Theater 3000” on June 15 and 16 at the Regent Square Theater. The return of the organization’s annual “Purple Rain” party is set for July 7 at Spirit in Lawrenceville.

While Jump Cut was an invention born of necessity, Susan Mazur, Jump Cut’s board president, says the group is energized by the change — especially the opportunities created by no longer managing the overhead and operations of the theater in Dormont. “To be free of that has freed us to do some pretty exciting things,” she says. “It’s exciting to be able to serve different communities.”