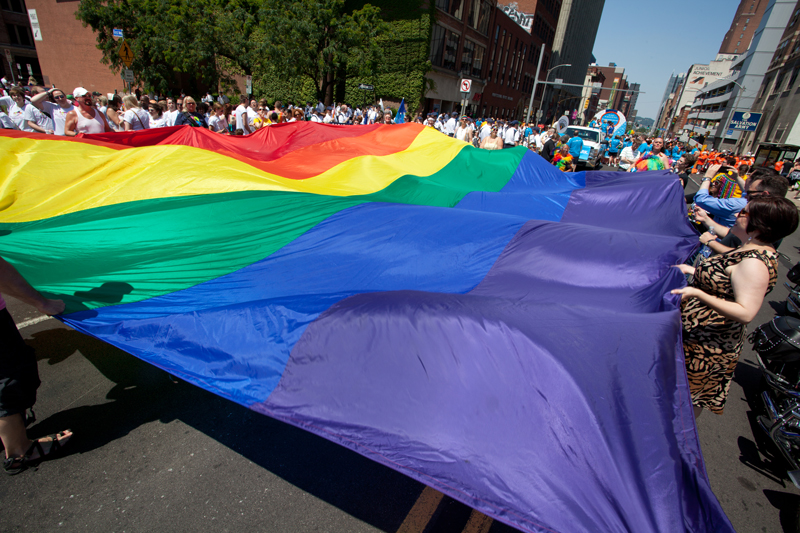 DOWNTOWN’S WEEKEND OF PRIDE
It’s that time of year again. Kaleidoscopic flags fly from downtown lampposts and vibrant “Be Brave” banners hang from the streetlights. Pittsburgh PrideFest is up and running, and it’s bigger than ever. In 2007, when the Delta Foundation of Pittsburgh took over the planning of Pittsburgh Pride, 3,000 people attended. In 2013, there were 85,000 attendees for the annual series of events — a parade, street fair, parties, concerts and more — that offer a safe and celebrative space for LGBT members of the community and their allies.

PrideFest’s two marquee events take place this weekend. Tomorrow, prepare for the traffic lights on Liberty Avenue to quake with the breathtaking bravado of Chaka Khan. A former member of the 1970s band Rufus, Khan will headline Pittsburgh Pride in the Street on Saturday, beginning at 5 p.m. Tickets are $40 in advance and $50 at the event, if available. Sunday’s Pride March marks the last day of the week's festivities, and much like a July Fourth fireworks show, the finale is a spectacle of stunning color and activity. The paraders begin on the Boulevard of Allies, skirt Grant Street, wind left onto Fifth Avenue and turn right onto Liberty. The parade will run from noon to 1 p.m.

THE WORLD CUP IS HERE. NO WATCHING FROM HOME!
So the chances for Team USA aren’t that great — the World Cup still is the best time to catch some football. The host country kicks off the World Cup today, as Brazil faces Croatia at 4 p.m.; the action continues through the July 13 final, giving you 31 days of uninterrupted global competition. With such a festive worldwide event, who could watch from home? In this week’s edition of After Dark, Online Intern Sam Fatula will offer a selection of local pubs where you can take in the matches in style. Novices and rabid supporters alike: It’s time to unite over the global game. Plan out your Cup schedule with the help of After Dark!

BRICOLAGE’S “OJO” IS THE ARTS FESTIVAL’S MOST UNUSUAL JOURNEY
From the moment you arrive at the “Ojo” travel agency on Liberty Avenue, it’s impossible to know what’s coming next. Is the young man offering instructions part of the show or just a mild-mannered volunteer? Should you try the popcorn? Is this a remarkably convincing illusion, or have you literally been transported around the world? Bricolage’s immersive theater experience, presented for free as part of the Three Rivers Arts Festival, will have you re-evaluating how you see the world — and I haven’t spoiled what the show is about. Pre-registration for “Ojo” has filled, but cancellations for the remaining shows are being posted on Facebook and Twitter; you also can arrive at one of the show times for a shot at a standby ticket. Remember to dress comfortably, as there some travel is involved.

IN THEATERS: It was a weird concept that led to an unlikely hit. The 2012 big-screen adaptation of “21 Jump Street,” with Jonah Hill and Channing Tatum, eclipsed expectations; now, it’ll get a sequel called — wait for it — “22 Jump Street.” Other films opening this weekend include DreamWorks’ surefire animated hit “How to Train Your Dragon 2” and the Clive Owen/Juliette Binoche drama “Words and Pictures.” PM Film Editor Sean Collier will appear on the WDVE Morning Show tomorrow at 7:15 a.m. to review “22 Jump Street” and “Words and Pictures,” two films that have no shared target audience. Tune into 102.5-FM or DVE.com to hear Sean’s reviews!

As part of the exhibit “RACE: Are We So Different?,” the Carnegie Museum of Natural History hosts a screening of the documentary “The New Black,” examining the gay rights movement and the black community, this evening at 5 p.m. The screening is free with museum admission, but pre-registration is required; more info here. —S.C.

The one-day adventure Urban Dare is much more than a race. Get ready for a one-of-a-kind challenge this Saturday; more info here. —S.C.