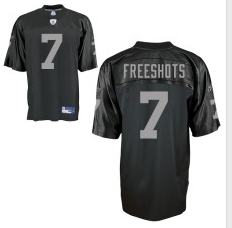 By the end of the night, Ben Roethlisberger might be an Oakland Raider. Or a Seattle Seahawk. Or even a Kansas City Chief. A Cleveland Brown? All bets are off.

Pittsburgh’s sports talk radio circuit boards have been overloaded for the past three days with people arguing passionately on both sides of the aisle. “Ben is being exploited by the media and run out of town,” some say. “I will not allow my children to wear the number 7 jersey ever again,” others say.

The debate has taken on the characteristics of sports talk radio’s forerunner and business model – political talk radio. The tone of callers has become mean, bitter and polarized. Some charge that the Rooney’s have lost the plot, others blame coach Mike Tomlin for not controlling his team. One guy even called into 93.7 The Fan at 2 a.m. and theorized that commissioner Roger Goodell had orchestrated a massive conspiracy against Big Ben.

Get a hold of yourselves, Pittsburgh. 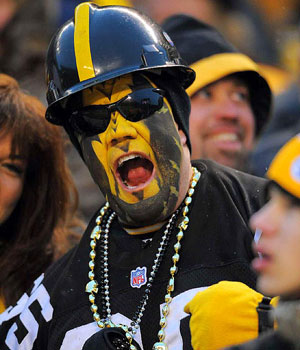 (Deep movie trailer voice) "One Man. Knows the secret. To a world-wide conspiracy. He’s the only one who can stop it. And. He Loves. To Party."

Will tonight’s NFL Draft possibly alter the course of the Steelers’ franchise for at least the next decade? Sure. The good news is that Pittsburgh is a city with thick skin. We enjoy almost any party, whether it’s stocked with kegs of imported Pilsner Urquell or Keystone Ice. Our enjoyment of football is no different.

We survived the Kordell Stewart era, the Bubby Brister debacle, and we even bitched our way through the reign of Terry Bradshaw, whose four Super Bowl victories still weren’t enough to overcome his dreary southern drawl for some fans. The Steelers survived a long lineage of noodle-arm nincompoops and hotheaded egomaniacs behind center by effectively running the football and playing good defense. Remember those days?

Whether or not our franchise quarterback/dive bar Don Juan is shown the door tonight, life will go on as usual. You will still hit potholes on your way to work. The traffic on the parkway will still prompt you to beat up your steering wheel. In late July, you will still get the same restless feeling of unbridled excitement when training camp opens in Latrobe. Ravens fans will still berate you on Internet message boards, whether or not our quarterback is Big Ben or Little Jimmy Clausen. 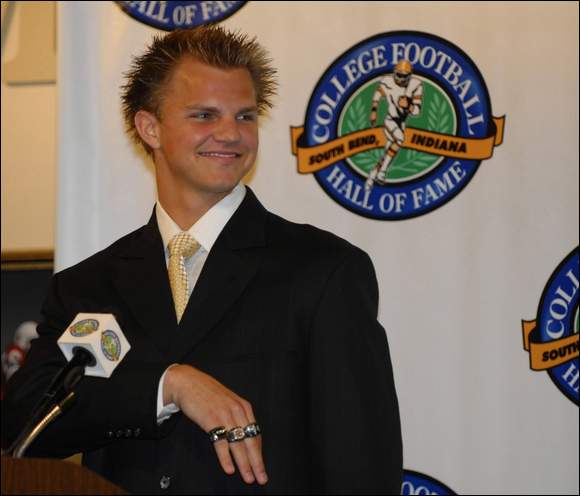 (Deep movie trailer voice) "Just when you thought it was SAFE. To love the Steelers again. A new form of TERROR arrives. With twenty pounds of pomade."

Some see tonight’s draft as an opportunity for the Rooney’s to reestablish the Steelers franchise as the class of the NFL. I’d say that party boat sailed away a long time ago when James Harrison, and more recently, Jeff Reed were re-signed. Will the organization make a statement on national television tonight, live from New York? It’s hard to think of a better time or venue for an act of contrition.

Yet in the end, my gut feeling tells me that the Steelers will regard their $100-million-dollar-man much like the U.S. government regarded Bank of America: too big to fail.

The reality is that the Rooneys, good people though no doubt, run a business, not a charity. And as of Thursday morning, the market for Big Ben is a bear. Even the amoral, irrational Al Davis is keeping his Raiders away from the tinderbox of a nine-figure quarterback with two strikes against him. 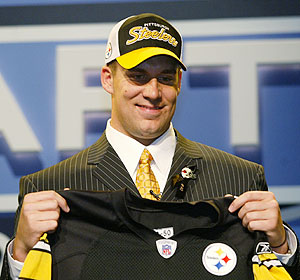 When Ben sees this picture from Draft Day 2004, it must be like how you feel when you look back at your White Snake bangs in the high school year book, but in complete reverse.

At least after tonight, we will know our fate. We might be welcoming our next epic-haired quarterback, Mr. Jimmy Clausen; or, more likely, the Steelers will hold on to their franchise QB, and we the fans will have to face the reality that—come the fall—Mr. Roethlisberger will saunter out of the tunnel at Heinz Field in his trademark tassel cap, making the sign of the cross then pointing to the sky, and in a split second, we will need to make a very complicated decision….

To boo a man of questionable morals, or to cheer for the quarterback of a football team we have loved since birth. How we respond will say more about us than it will about Ben.

Who is Ben Roethlisberger when the stadium lights go down…when he goes home at night? Is he the soft spoken kid from Ohio who writes PFJ (“Play for Jesus”) on his cleats? Or is he the invincible millionaire at the sloppy last-call bar in Milledgeville who allegedly shouted to a group of women, “All my bitches, take some shots…"?

Perhaps the real question is: How much longer can we watch this ten-car pile-up before we become part of the accident?

I’m bored with it. How about you?