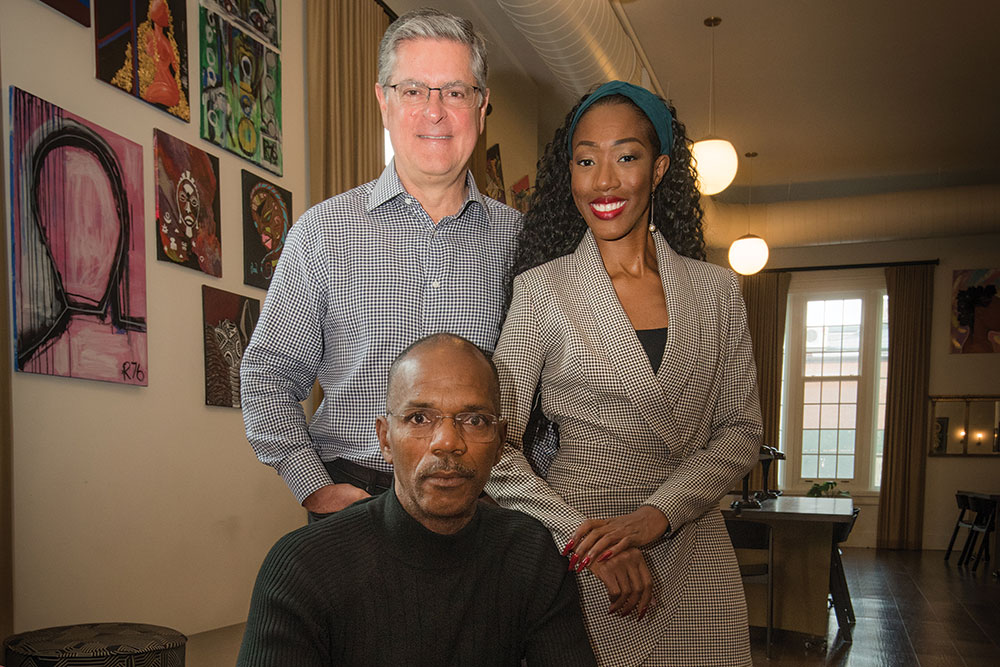 In the summer of 2020, businessman David Motley received a call from his friend, Sean Sebastian, a Pittsburgh investor and financial consultant. Sebastian, like many others, was responding to the murder of George Floyd in Minneapolis and the spotlight it shined on persistent racial inequality. He asked Motley to join with him and technology innovator Kelauni Jasmyn to launch a Black-led venture to create change.

In addition to their concern over race and social issues, the three also came together over another initiative — one that Jasmyn began in 2016.

Jasmyn is the founder and CEO of Black Tech Nation, a Pittsburgh-based education and advocacy group that works to bring Black people into the tech industry. Imagined, initially, as sort of a Saturday morning meet-up for tech nerds, once Jasmyn joined Motley and Sebastian, the group eventually created Black Tech Nation Ventures, a $50 million venture capital fund that invests in African American and diverse technology startups.

“We know that ideas don’t have color,” says Jasmyn, “so the goal is to open up a space in tech for Black people and the Black community and create more opportunities.”

Black Tech Nation Ventures in its first year has drawn investors that include Carnegie Mellon University, Bank of America, First National Bank, Mastercard, the Pittsburgh Pirates and Mark Cuban as it seeks to not only find and fund emerging Black tech talent, but also to recruit and nurture other Black professionals into the venture capital funder space. It also seeks to diversify the geography of venture capital influence and not have it all be centered in Silicon Valley.

At its core, the trio sees Black Tech Nation Ventures as an engine of Black and diverse generational wealth creation, an opportunity to invest in communities that have been left out and underrepresented.

Much of this began with Jasmyn. She graduated from Howard University with a pre-medicine degree and then decided she didn’t want to be a physician. She worked as a teacher and lived for a while in Los Angeles, New York, Spain and parts of Africa.

As she considered next steps for building a career, a colleague’s idea to try tech intrigued her. “Just being a Black woman in tech, and the opportunity to make six figures in your first job,” she says, “sounded good to me.”

An opportunity to train in a three-month tech bootcamp, Academy of Pittsburgh, brought her to the city in 2016. Her plan was to learn coding and find a path to Google.

However, the immersion into tech exposed Jasmyn to the digital divide, the racial and economic gap that limits access to computers and careers in the tech industry. As she went around town to events and programs, she says she was often the only Black person in the room. 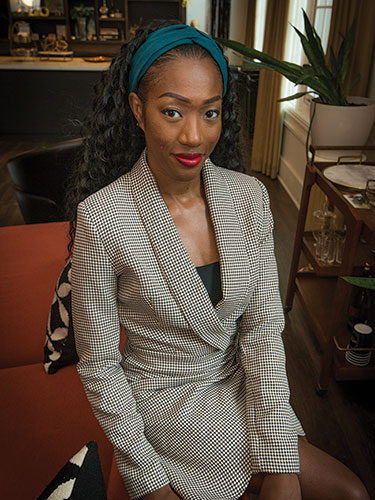 “WE’RE ONLY AS STRONG AS OUR WEAKEST LINKS, SO THE GOAL IS TO WORK HARD TO CREATE BETTER SPACES FOR EVERYONE TO WIN, REGARDLESS OF RACE, GENDER OR SEXUAL ORIENTATION.” – KELAUNI JASMYN

Black Tech Nation, which now has more than 2,000 members and supporters, positioned itself as a “digital Wakanda” and began to host forums for Black professionals to build awareness of and address the digital divide.

The energy of the advocacy caught the attention of Sebastian, who moved to Pittsburgh 25 years ago to found Birchmere Ventures here. Since then, it has invested in more than 100 companies, about a quarter of them with significant diversity in their leadership teams. He became the first to invest in Black Tech Nation because he says he believed the work was relevant to the moment — and that supporting it would be a way to diversify the industry and create “transformational wealth” for diverse communities.

Sebastian, like Jasmyn, also knew that in trying to bring capital and access to African Americans they would need to scale beyond the limitations of a nonprofit. Sebastian, using his business “muscle memory” and experience of working with a diverse portfolio, would mentor Jasmyn, showing her how to launch a fund.

In spring of 2021, along with Motley, they co-founded Black Tech Nation Ventures.

The diversity of the trio — a mashup of race, gender, generational and professional experiences — and their varied interests are large parts of what fuels the venture.

“We’re the most unlikely group ever,” says Jasmyn.  “We laugh about it, but it’s what makes it work.”

Jasymn is an African American millennial who grew up in an underserved community on the outskirts of Chicago. Although she’s an outsider to Pittsburgh, she’s energized a community of Black techies here.

Motley says he readily came onboard. He is a Pittsburgh native who grew up in the city’s East End. After earning a degree in engineering from the University of Pittsburgh, he earned an MBA from Harvard and founded the African American Directors Forum, a project that seeks to increase the representation of Blacks on public company boards nationally. He’s been able to leverage the talents and resources of a broad network of Black professionals to aid the venture.

Sebastian is from Washington, D.C., and has lived here for decades. Though he’s white, he is aware of tech’s lack of diversity and is an ally in wanting to make it more inclusive and progress beyond it being “Yale, pale, male and stale.” 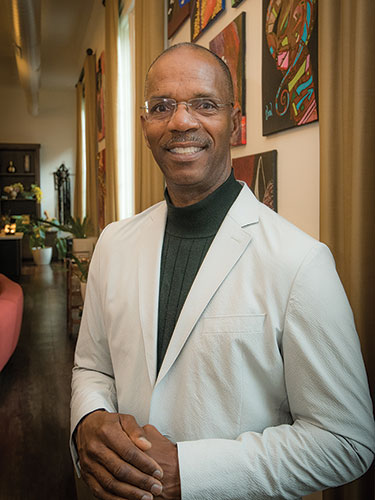 “PITTSBURGH’S RELATIVELY SMALL SIZE AND ITS POOL OF TALENTED PEOPLE ENABLES POTENTIALLY POWERFUL CONNECTIONS THAT MIGHT NOT HAPPEN IN BIGGER CITIES.” – DAVID MOTLEY

As Pittsburgh’s new economy was being heralded as one of medicine, business and education, technology was increasingly becoming a part of the conversation.

“I came at the right time, making the right noise,” Jasmyn says, a time when the city, foundations and others were able and willing to invest in making the city more inclusive for all.

It didn’t hurt, says Motley, that “Pittsburgh’s relatively small size and its pool of talented people enables potentially powerful connections that might not happen in bigger cities.”

As it pushes toward a goal of being a top-tier firm, so far, Black Tech Nation Ventures has a portfolio that includes support of three startups in the financial tech and education tech space. These include Boston-based BrightUp and Hive Wealth, in Washington, D.C.; founded by African American women, both are devoted to closing racial wealth gaps. There’s also BlendEd, a company based in Cleveland, that is headed by a Black man. It is developing an open-source educational platform to help cultivate world-class learning at community colleges.

Black Tech Nation Ventures is also working to close its first deal with a Pittsburgh business with a Latina founder; it also has made an undisclosed investment in a diverse-led Pittsburgh-based company.

While it is a national fund, the founders hope to invest about 25% of its portfolio in Pittsburgh-based companies with investments ranging from $250,000 to $1 million. 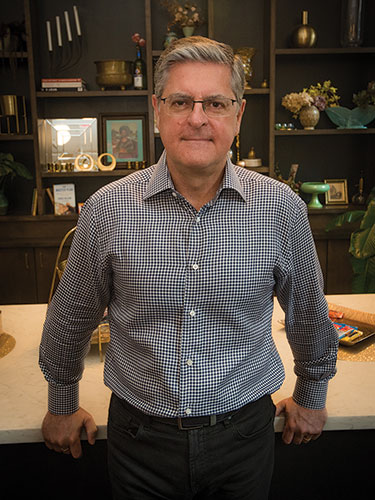 THERE IS THE DEEP SATISFACTION OF “KNOWING THAT YOU MADE POSSIBLE OPPORTUNITIES FOR PEOPLE THAT JUST HAVEN’T HAD A FAIR SHOT, WHO HAVEN’T BEEN ABLE TO GET IN THE ROOM. AND THAT FEELS GOOD.” – SEAN SEBASTIAN

As they build toward a portfolio of 30 investments, the trio will evaluate strategies that support health care tech and what it calls culture-based markets, aiming toward tech-enabled businesses that provide solutions for specific groups of people, such as Black women and hair care. It also is fulfilling its mission of seeking diversity at every level.

It is supported by an all-female legal team and a Black accounting firm and uses other diverse providers. The fund is based Downtown in a co-working space known as Emerald City, which is owned and managed by African American women.

According to Jasmyn, Black Tech Nation Ventures is the only Black-owned fund over $50 million in Pittsburgh.

By and large, Jasmyn and her partners are in good company. Other Black venture capitalists have recently started new firms: In 2018, Adeyemi Ajao raised $137 million to kick start his Base10 Partners firm, making it the most well-funded venture capital account led by a Black founder. That same year, Sarah Kunst raised $3.5 million to launch Cleo Capital, which at the time was the second-largest debut by a Black woman-led venture capital fund, according to The Plug, a Black tech news and insights platform on Bloomberg.

In 2014, tennis champion Serena Williams formed Serena Ventures, a project reported to have raised $111 million. An analysis by The Plug found that the median investment amount for Black women-led venture capital funds is $3.3 million.

As it moves forward, says Sebastian, the fund is striving to be financially successful, and then the trio can aim at what he calls the “psyche reward,” the deep satisfaction of “knowing that you made possible opportunities for people that just haven’t had a fair shot, who haven’t been able to get in the room. And that feels good.”

The three believe the city has a way to go to address some structural issues, but Black Tech Nation and the venture capital fund can help bring some national attention to Pittsburgh and the contributions of people of color.

“We’re only as strong as our weakest links,” says Jasmyn, “so the goal is to work hard to create better spaces for everyone to win, regardless of race, gender or sexual orientation.”

Ervin Dyer is a Pittsburgh-based writer who covers Africana life and culture.

This article appears in the January 2023 issue of Pittsburgh Magazine.
Categories: Community Feature, From the Magazine