We ask two Pittsburgh-area brides about their creative solutions for solving this age-old problem. 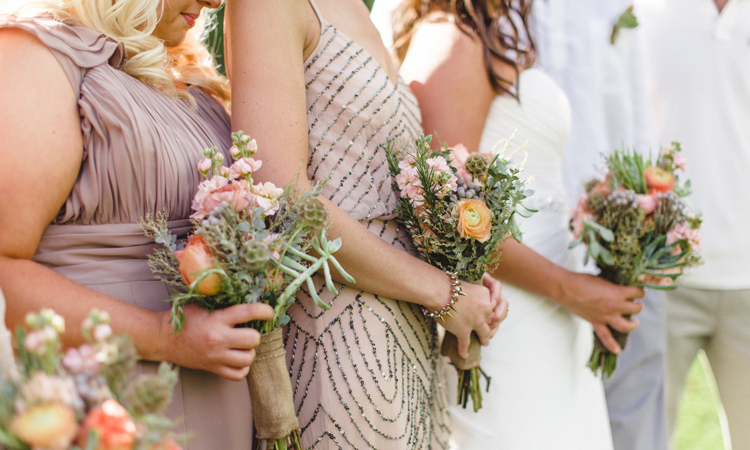 In the film “27 Dresses,” Katherine Heigl pulls monstrosity after monstrosity from the overstuffed closet where she keeps her old bridesmaid frocks. In the movie’s opening scenes when she serves as the maid of honor in two separate weddings, both brides tell her, “You can shorten it and wear it again!” (to which she gracefully — but untruthfully — replies, “That is definitely so true!”). None of us wants to be Katherine Heigl (at least, in that scenario), but most of us also don’t want to be the bride who forces her closest female friends and relatives into dresses they aren’t comfortable in or will wear only once.

Fortunately, brides today are coming up with creative solutions to the age-old problem. Many let each member of their wedding party select a different style of gown in the same color from the same designer, so that, for example, no one who hates strapless dresses gets stuck wearing one. Others order from online sites such as ModCloth or Lulu’s, choosing less expensive, casual dresses that are outside of the bridesmaid norm.

One of our favorite solutions is to set aside the idea of matching maids in chiffon in favor of completely different dresses that all fall within shades of the color scheme. 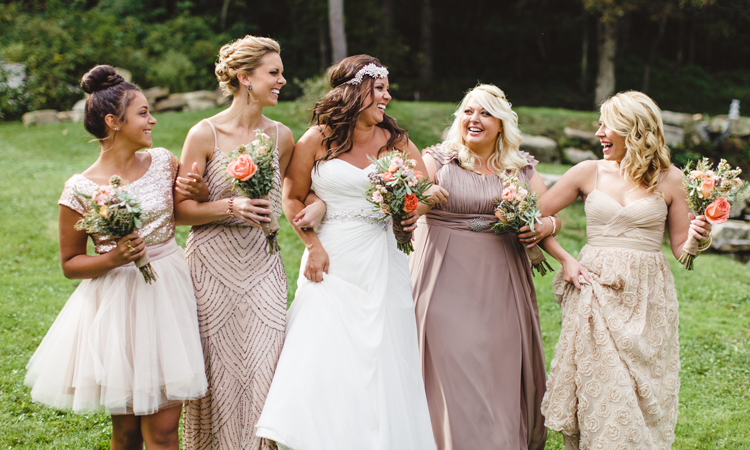 When Heather Farmer married Sean Condeluci on Sept. 13, 2014, she wanted the day to match their personalities. “The entire wedding was a little nontraditional,” she says. “My husband and I are really laid back, and we wanted that [attitude to be ] felt throughout the entire day.”

For Heather, it started with a shimmery Adrianna Papell dress she found on Pinterest. She knew some of her bridesmaids would not feel comfortable while wearing it, so she sent the picture to each of them and said, “Match it!”

They all rose to the occasion. “The very first one they all picked out was the one they stuck with,” Heather says. “It wasn’t a difficult process at all.” She says receiving pictures of prospective dresses actually made the whole thing more exciting.

Her sister-in-law, who also was her maid of honor, bought the Papell dress, which turned out to be the most expensive of the bunch. She lives in Orlando, Fla., and she plans to wear the dress again on a cruise. “One of her friends already borrowed it for another wedding,” Heather says.

Another attendant’s dress came from Macy’s for $90, while one wore a $70 eBay find. The last dress, which cost $150, came from a David’s Bridal store in Beaver.

“Everyone felt great because they picked [the dress] out themselves, and it was in everyone’s price points as well,” says Heather.

Her advice for a bride looking to achieve a similar look? “Trust and relax. They’re in your wedding because they’re the closest people to you. They’re absolutely not going to let you down.” 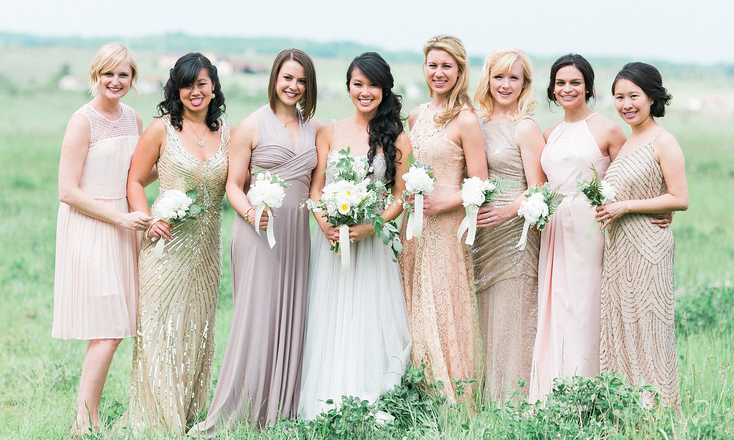 For Eva Lin, it was important to keep things cost-efficient for her wedding on May 24, 2015 to Arthur Douglass. “I wanted to get my bridesmaids to have dresses that they would wear again because I know how expensive weddings can be,” she explains. “I wanted to make sure the dresses were something they liked, they would wear again and that were also pretty affordable.”

Eva says she also got her inspiration from Pinterest. She made a board with approximately 20 dresses in the same color scheme and let her bridesmaids review it and pick the ones they wanted. “I searched ‘gold dresses,’ [and] maybe taupe or rose or kind of a light peach. I searched around and pinned a few things,” says Eva.

Length was another common denominator for Eva. “I wanted them all to be long,” she says. “I just love maxi dresses, so anything that was neutral and maxi went on my Pinterest board.”

Though it wasn’t her primary choice, she also fell in love with the Adrianna Papell dress that inspired Heather. “Every Pinterest board for neutral bridesmaids’ dresses had this one Adrianna Papell,” Eva says. 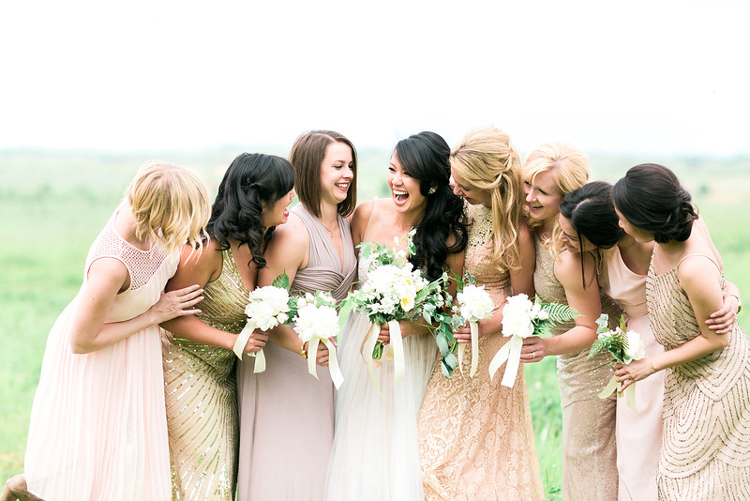 Two of her bridesmaids found dresses at Lulu’s, one ordered a dress from Rent the Runway and one found a dress on eBay that originally came from Nordstrom. “I think they all spent under $150, and some of the dresses were around $40,” says Eva.

“I just love the look of everyone kind of wearing something that fits their body and that they loved — that fits well with their personality,” Eva says.

Her groom took a similar tactic for his groomsmen by asking them to wear a gray suit from their closets. He bought them each matching bow ties to keep things cohesive.

“A lot of our friends were traveling to even come to our wedding,” Eva explains. “We wanted to make sure anyone who was in our wedding kept their costs low. It is your day, but people are doing all of these things for you, so try to help them out as much as you can.”

Her final words of advice: “Just because something is a tradition doesn’t mean you have to do it.” We couldn’t agree more.