Mike Wallace is a 60-Minute Man

Steelers wide receiver Mike Wallace was made for television. 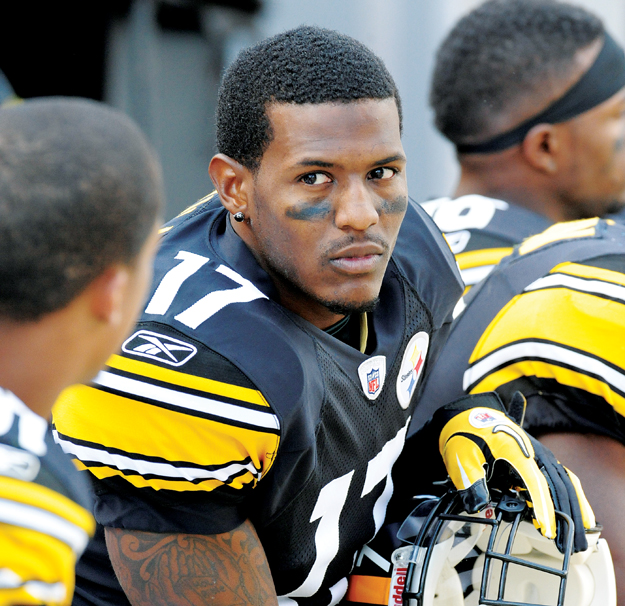 You’re a top-five NFL wide receiver. But describe who you are to my grandmother, who doesn’t care about football.
Well, the first thing you need to know is that I’m the coolest person on the planet. No man, seriously, I’m just a chill guy. I lay low, stay in the house. Mostly, I like to play video games with my friends—a little NBA 2K, a lot of Madden.

Did you get the coveted perfect-100 speed rating on Madden ’12?
No, man! They’re holding me back. We have to talk to the guys who do the ratings at EA Sports. They keep playin’ me.

I bet Steeler Nation would love to have your Madden online ID so that they can show you what’s up.
They can hit me up on Twitter [@Wallace17_DaKid]. Maybe we’ll do a little contest or something for the kids. Just warn them, though: I’m not going to take it easy. I’ll beat ’em.

Ben Roethlisberger just held up a replica WWE Championship belt and told me to ask you about it.
Aw, man—that’s the worst belt I’ve ever seen. It’s not even real gold. If I had a belt, it would be 24 carats. Basically, we were playing a shuffleboard tournament, and I got hosed. See, Ben played me in the first round because he didn’t want to see me in the championship, so I wasn’t warmed up yet. That belt is weak, man!

How exactly does one go from being a third-round pick to a top-five receiver in three years flat?
I think I came into the best possible situation of any guy in the whole draft. I got to learn behind Hines and Santonio, two Super Bowl MVPs. How can it get any better than that? Hines really taught me how to be a pro: Do things in your community; stay out of the papers for the wrong reasons. It was a perfect transition.

Everybody in the league has ridiculous 40-yard-dash times. Why are you a little bit faster? Desire?
Routes, blocking—that’s desire. Speed—either you have it or you don’t. Coming out of college, people never really gave me a shot. The experts had me as the 19th- to 30th-best receiver in the draft. I was supposed to be a special teamer my first year, if that. Now, I’m not even looking at the guys in my draft class, I’m looking at the best receivers in the league. I’m trying to outdo them.

You’re always talking about swagger …
Yep. Mine’s the meanest in the league.

Practice-squad lineman Trevis Turner just walked over and begged you to give him a shoutout. He could probably use the pub.
Nah, Trevis, you smile too much, man. No shoutouts for Trev!

First thing you think of when I say this name: Mike Tomlin.
One of the best coaches out there. For it to be this level and the way he approaches the game, it’s great. *Wallace notices wide receivers coach Scottie Montgomery walking past* And then you’ve got Coach Montgomery—worst coach I’ve ever had in my life! Nah, Coach Scottie is the best. He’s still young, and he played football, so he knows what we’re going through on the field. Same with Coach T. It’s a great situation.

San Francisco coach Jim Harbaugh recently got into a little dust-up with Lions coach Jim Schwartz after a post-game handshake. How do you think coach Tomlin would’ve handled that altercation?
I don’t think they’d ever try Coach Tomlin like that. He’s in too good of shape. Those older coaches don’t want to take that route with Coach T. He’s a little younger than them. *Laughs*

What’s your favorite Tomlinism?
Oh man, he says so much good stuff. I’ll go with, “The standard is the standard.”

What’s the wildest thing an opposing fan has ever said to you?
Oh, the worst. I don’t even think I can say that stuff. They curse me out so badly. Cleveland is pretty bad. Baltimore, too. It’s nasty on game day.

Toughest cornerback in the league. Go.
The obvious guy is Darrelle Revis, but in practice I see Ike Taylor every day. He’s the toughest guy I go against because he knows what I like to do.

Speaking of Ike, he’s been chirping about your running style.
Yeah, he says I run wrong. See, I have nice form when I start running fast. It’s just when I jog, my hands are kind of low like … You know what, whatever, he can say I run wrong, but I know I run right—right past people.

This article appears in the December 2011 issue of Pittsburgh Magazine.
Categories: From the Magazine, Hot Reads