More than a half-century after its construction, one Atomic-era House in Harmony Township catches the attention of two eager house hunters. 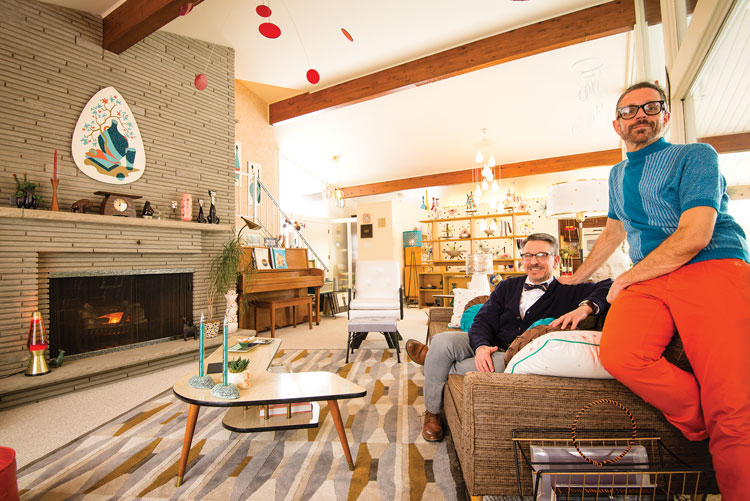 The Atomic House in which Phil Cynar and Jeffrey Rhodes live sits high on a hill above Ambridge in Beaver County. It's a 14-mile commute to Downtown and the South Side, where they work, but to them every mile is worth it.

Time apparently does stand still for those living the Mid-Century Modern dream.

The TV show "Mad Men" gets much of the credit for the popular appeal of Mid-Century Modern real estate today. The term "Atomic Ranch," coined in the early 1950s, refers to the proliferation of modern ranch-style and similar homes built in communities across America. The "Atomic Era," as it turned out, was a short-lived moniker that engendered hope and optimism. 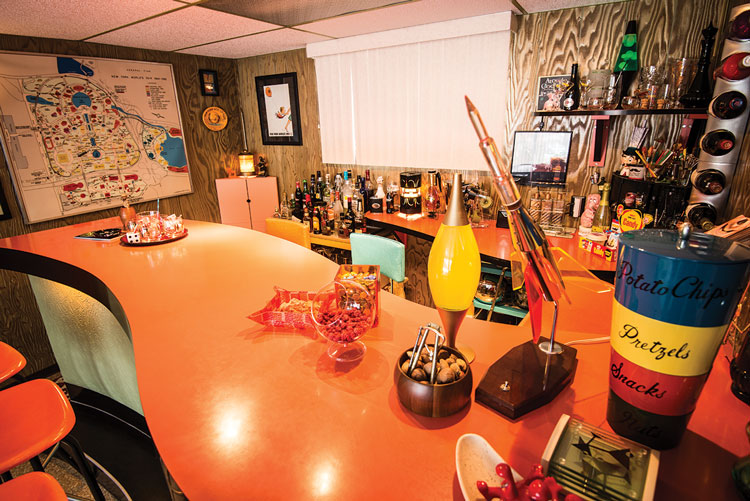 Today “Atomic Ranch” refers generally to modernist abodes built in the Mid-Century Modern period, from the 1940s to the 1960s. It also refers to a magazine published out of the West Coast as a resource for followers of the style. Influenced by Prairie homes and the designs of Frank Lloyd Wright, Mid-Century Modern (MCM) emphasizes simplicity, modernity and open interior spaces that bring in light and a sense of the outdoors.

Pittsburgh and its suburbs contain a healthy stock of MCM homes, many of them concentrated in the city, South Hills, Churchill and Turtle Creek. When the couple began looking for such a home, however, they agreed to a longer commute if they found the right home with “good bones” at the right price. Similar homes in the city and the South Hills sell for two to three times more than those on the outskirts, they learned.

“If you dig Shag (artist Josh Agle) and want to groove in a pad like the ones portrayed in his iconic art, then Mid-Century Modern is the [best] way to go,” says Cynar. 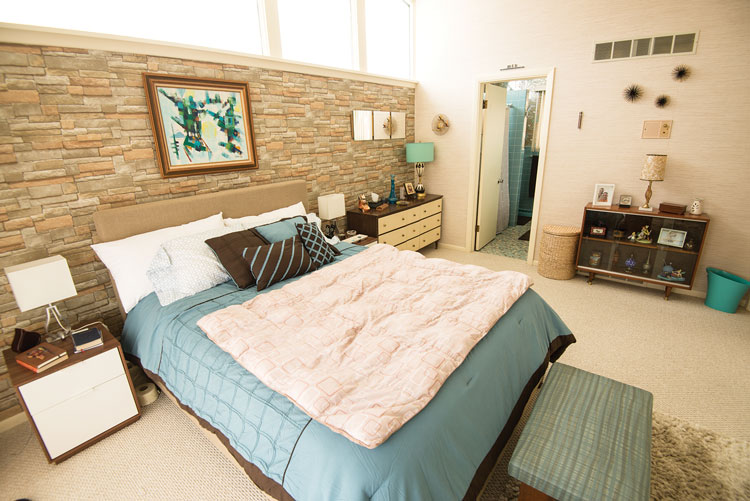 Ultimately he and Rhodes chose to get their groove on west of the city in Harmony Township. They drive to work together every day. Cynar works as a senior communication specialist for the Allegheny Conference on Community Development. Rhodes is an office administrator for the Pittsburgh Life Sciences Greenhouse.
Rhodes scoured the internet and found the split-level ranch home online. It was love at first sight. “What caught my attention was the round built-in chair in the downstairs game room,” he says. “I told Phil we had to see it. It was the [inside of the] ‘I Dream of Jeannie’ bottle.”

As both of them are enthusiasts of the era, Rhodes knew the home would suit both of their tastes. Cynar has an appreciation for evocative architectural elements, having lived for many years in a Craftsman-style bungalow in Mt. Lebanon. An avid collector of MCM furnishings and hipster kitsch, Rhodes wanted nothing less than the perfect showplace.

“I knew I was in trouble when I had to pull him off the ‘I Dream of Jeannie’ chair,” quips Cynar, who eventually pulled the trigger and bought the house they now share. 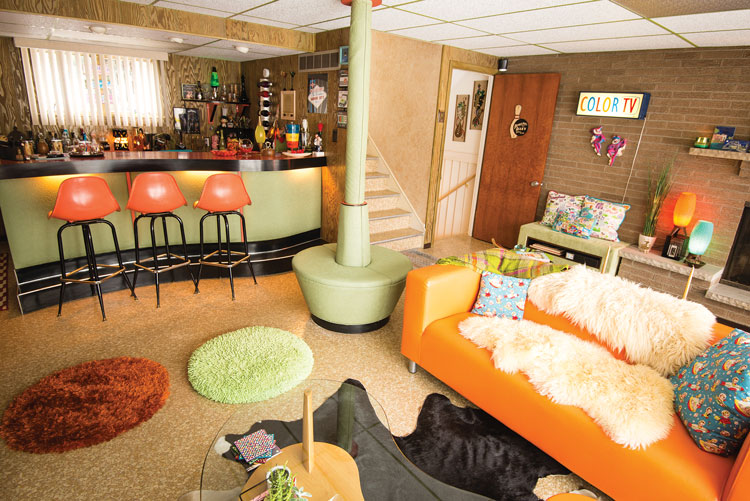 The beamed cathedral ceilings, floor-to-ceiling windows (shrouded at the time by heavy draperies) and not one but two irresistible outdoor patios for entertaining beckoned, he says. Another appealing feature? Every bedroom has access to a balcony.

The 1,825 square-foot Atomic Home was built for an Ambridge dentist in 1962. Spacious yet cozy, with three bedrooms and two and a half baths, the home sits on the highest point above the town of Ambridge in a section of town where many neighbors are longtime residents.

The home came along at a time of transition for both men when they were looking to rebuild their lives. Cynar was recovering from the loss of his partner of 19 years, who died a year earlier after a two-year battle with pancreatic cancer. Rhodes had recently come out. He was also a friend of Cynar’s former partner, with whom he shared a passion for all things Walt Disney.

A mutual friend introduced them. Their first date was to view the pop art movie “Big Eyes.”

They moved in June 2015 and went to work resurrecting the home’s ’60s style. Light streamed into the house with the removal of the drapery panels from the living-room windows. Their 25-pound Siamese cat, Cooper, loves basking in the glorious light, says Cynar.

“It brings the outdoors in,” he adds. “I feel like I’m in Northern California.”

As the third owners of the home, they were lucky to inherit several original pieces, including abstract, bell-shaped lighting fixtures. Other aspects of the house required remediation. 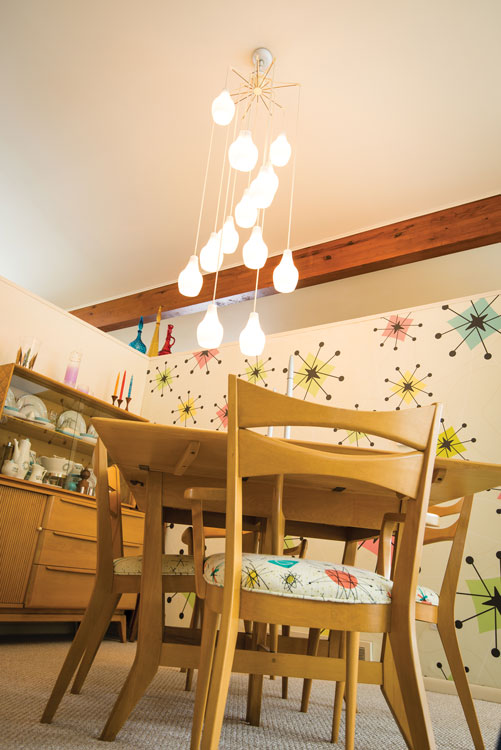 The previous owners updated the kitchen a few decades ago, and the current owners say its Tuscan-style look is the least period-appropriate aspect of the home.
“Perhaps in time we can renovate [it] to our taste,” says Cynar.

To their delight, they found many of the home’s authentic elements in working, pristine condition, with the unfortunate exception of the Nutone intercom/music system, which they plan to revive. Colored orbs over the entryway and opal teardrops in the mint-tiled bathroom required little more than a good cleaning.

They placed their Heywood-Wakefield dining room set, bought jointly at RiverTown Antiques in Rochester, Beaver County, under the dramatic cascading pendant chandelier and enclosed the space with a matching room divider. They ripped out the old carpeting and installed more era-appropriate cream-colored, wall-to-wall Berber carpeting.

A Mediterranean beach scene on the freestanding dining room wall clearly had to go. Rhodes covered it with a retro star-print mural he found on the Polish website pixersize.com. The living-room couch, set at an angle by Cynar, found new life as the focal point of the room.

As hoped, Rhodes’ eclectic collection settled in as if it had been there forever. Tiki prints by Shag, a vintage Siamese wall clock and a collection of Canonsburg-made Temporama dishware blended harmoniously with family heirlooms, Cynar’s Mission-style furniture from his Craftsman home and a piano that belonged to him and his former partner. A teardrop wall plaque, known as “gravel” or “mosaic” art, featuring wine bottles flecked in colored plastic, makes a smashing statement over the fireplace.

Downstairs, memorabilia from the 1964/65 New York World’s Fair adorns what the couple fondly refer to as the “rumpus room.” A flamboyant coral and black Formica bar trimmed in mint-green padded vinyl with matching bar stools offers another place to pour a drink. 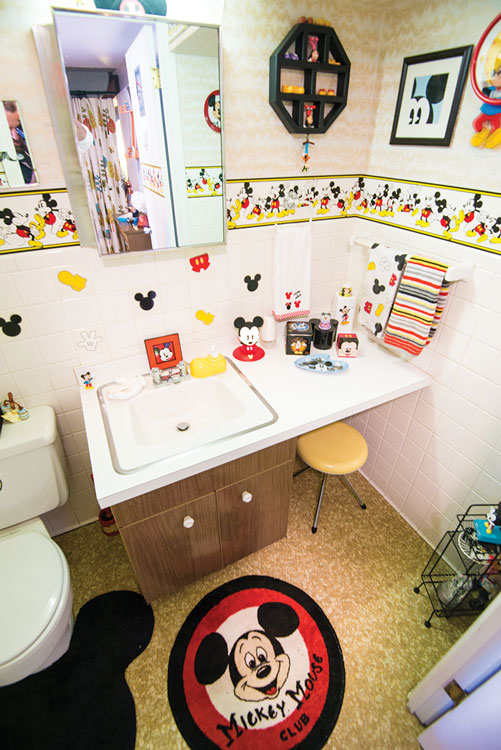 The downstairs powder room, a shrine to Mickey Mouse, celebrates the many manifestations of the character. A vast library of vinyl and (mostly Disney) videos are meticulously shelved in the media/laundry room.

“It’s been fun marrying our wares together,” says Rhodes. “Our pieces sing here.”

On the weekends, Rhodes’ quenchless thirst to recreate the era often leads them to one of their many favorite local thrift, retro and vintage shops. A grimy chair that could be right out of Don Draper’s office looked like trash to Cynar but a treasure to Rhodes. Restored and upholstered by Steven’s Custom Upholstery in Aliquippa, it occupies a prominent place in the living room.

The home has inspired additional research. Their neighbor, whose father designed the covered patio and barbecue, helped them to locate the original blueprints of the house. They discovered a home planner’s reference book that cites the stone used in their fireplace.

The Atomic House has given them a new, light-hearted identity, too. Tongue-in-cheek, they call themselves the “Fabulous Harmony Boys” in homage to the reality-show entrepreneurs, “The Fabulous Beekman Boys.”

“At the end of the day, it really came down to what we can afford, the housing style we crave and where we could find it,” says Cynar. “We were both looking for harmony in our lives. Ironically, we found it in Harmony Township.”

Debra Smit is a frequent contributor for Pittsburgh Magazine. Her work has appeared in Fast Company, OZY and the Washington Post. Follow her @debrsmit 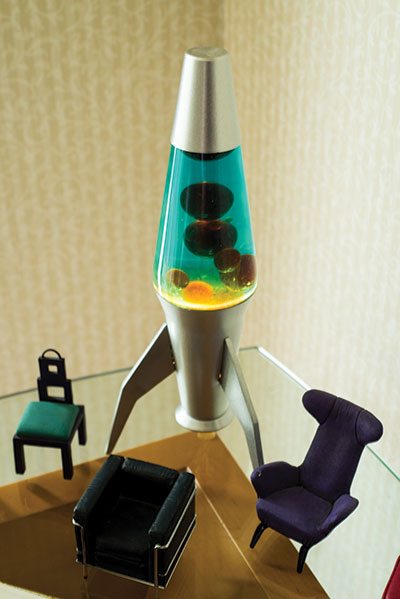 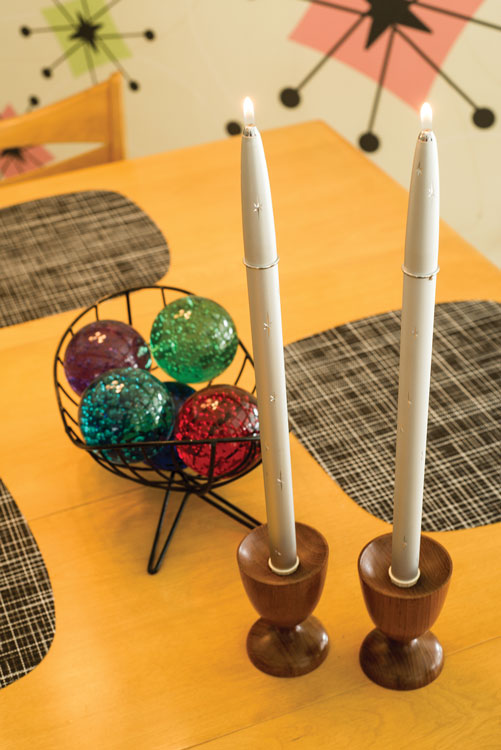 Fabulous Mid-Century Modern treasures abound in the region. “They are dirt-cheap and everywhere if you know where to look,” says Rhodes. Here are a few of their favorite places to shop: