Microscopic Opera proves opera can be fun, intimate and kid-friendly with its latest performance, ‘The Little Sweep.' 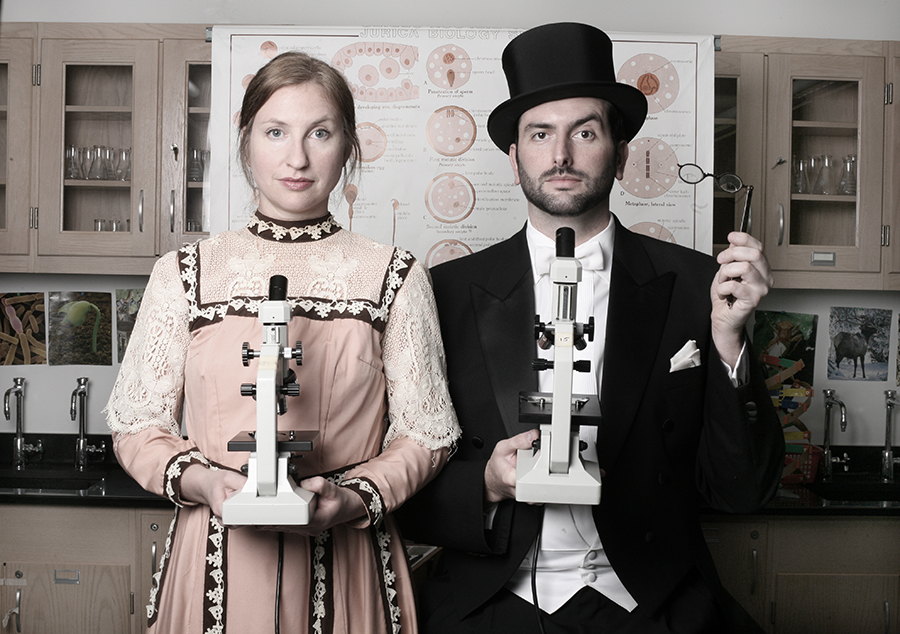 When most people think of opera, they think big. Colossal sets. Lavish costumes. Dozens of characters, plus dancers, supernumeraries and maybe a live animal or two. Opera is the pastime of royalty. Even the opera house itself is an architectural giant, filled with private boxes and chandeliers.

The Microscopic Opera Co. wants to dispel that myth. Opera can be small and intimate. And it can fit into a tiny theater and showcase a handful of singers. Wigs and smoke effects don’t make opera — magnificent voices do.

“Chamber opera is a subgenre that is not really used as much,” says Andres Cladera, co-founder of Microscopic. “We wanted to demystify the whole opera thing. The audience is close, so you can really see the faces and the emotions.”

“I love music, but for me, I love theater and the story,” says Erica Olden, Microscopic’s second co-founder. “As a kid, I wanted to be an actress. I had some talent in music. I played different instruments, and I discovered I had a singing voice. But some of the [grand] operas you see fail to connect with an audience, especially when you’re sitting in the back row of a giant theater.”

This month, Microscopic presents The Little Sweep, a children’s opera with music by Benjamin Britten and a libretto by Eric Crozier. First produced in 1950, The Little Sweep tells the story of Sam, an orphaned chimneysweep who wishes to escape his pitiless masters. But the plot is less important than the concept: Britten, a mid 20th-century composer, conceived a series of shows for children called Let’s Make an Opera. Not only do the performers “compose” and “rehearse” the play in front of a live audience, but they also encourage everyone to sing as a chorus. The production becomes increasingly interactive as it progresses.

Olden and Cladera found each other as graduate students at Carnegie Mellon University, where Cladera majored in orchestral conducting and Olden in music education. Olden cultivated her voice for years, and Cladera studied voice, piano and — especially — operatic conducting. The two became close friends and collaborators, going on to instruct classes at the Ellis School.

“Everybody was shocked that I was teaching opera to high-school girls,” Cladera says of his time at Ellis. “We have to make sure that kids are exposed to that music.”

Cladera and Olden staged several small productions ­— first as students and later as teachers. Finally, they decided to hunker down and create a company. They struggled for months to find the right nomenclature; now, strangers attend shows just because they love the name.

“I’ve always been passionate about contemporary music,” says Cladera, who saw his first opera at age 7 in his native Uruguay. “[At Microscopic,] we decided to combine these two passions — contemporary music and opera. We call them ‘music dramas.’ All the works are in English. We believe in doing works in the language of our audience.” (As opposed to, say, traditional Italian or German.)

The duo honed its experimental impulses while working with Karla Boos, executive and artistic director of Quantum Theatre.

“Karla has become a mentor,” says Olden. “She sees things up close. She tries to connect with the audience. It’s not like being at a [grand] opera; it’s like being at a play and there’s all this great music, too.”

Microscopic, which was established in 2009, will soon celebrate its first year as a bona-fide nonprofit.

Olden and Cladera love their collaboration, despite a difficult geographic reality: A year ago, Cladera moved to Denver to conduct for Opera Colorado. Somehow, though, they manage to maintain their small company and keep the momentum going. Their hope is to not only stage time-tested chamber plays, but to commission new works as well. (Their near-future project: an operatic rendition of Night of the Living Dead, co-created by composer Todd Goodman and librettist Stephen Catanzarite.)

With Olden firmly planted in Highland Park, and Cladera commuting regularly between Denver and Pittsburgh, Microscopic may thrive indefinitely.

“We have different strengths,” says Olden. “[Andres is] so personable. He’s so outgoing. I like to meet people, too, but I do a lot of [other things.] I didn’t fear for the future of Microscopic Opera when Andres moved 2,000 miles away.”