The Pittsburgh Park Conservancy and City of Pittsburgh, in partnership with Heritage Landscapes, are recognized with the distinguished national design award for their restoration of Mellon Square, Downtown. 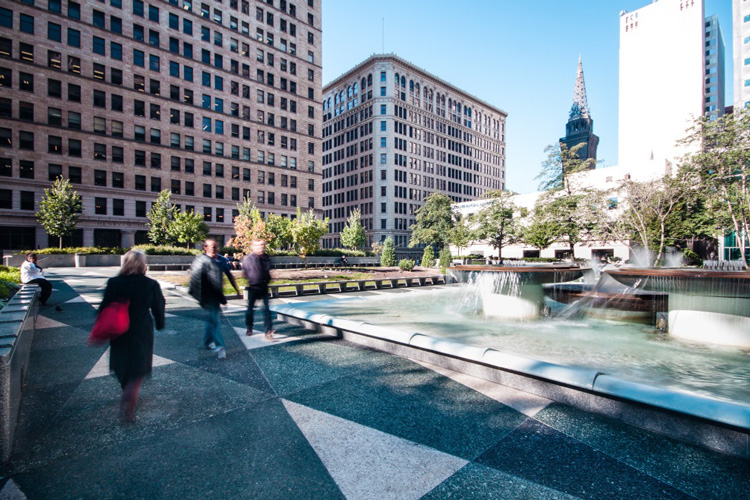 Mellon Square has been acknowledged by Docomomo US as one of 10 projects in the nation that reflect the efforts to advocate for, restore and celebrate the architecture, landscapes and typologies of postwar society in the United States.

Mellon Square, the first urban plaza in the United States, opened in 1955. After starting to deteriorate due to harsh Pennsylvania weather, economic hardships and continuous use, the Pittsburgh Parks Conservancy and other organizations developed a preservation, interpretation and management plan for the park in 2008. A five-year restoration and revitalization project, completed in 2014, attracted national recognition with the Docomomo Award.

“The Docomomo Award is a wonderful honor for our city, and for the Parks Conservancy, City of Pittsburgh, Heritage Landscapes and all of our professional and community partners,” says Parks Conservancy curator Susan Rademacher in a statement. “The public’s enthusiastic embrace of Mellon Square since its reopening has been beautiful to see, and the national recognition that this award brings to the Emerald Jewel of the Golden Triangle is a cause for celebration for our city and region.”

The Modernism in America Awards is the only national program that commemorates people and projects working to preserve and rehabilitate our modern heritage. It helps to bring awareness of the ongoing threats against modern architecture and design.

The Parks Conservancy, City of Pittsburgh, and Heritage Landscapes will accept the award on Thursday, Sept. 22 at a ceremony in New York City.