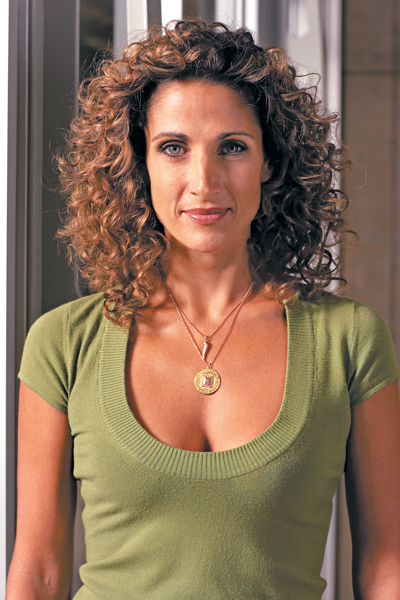 The youngest of Harry and Connie Kanakaredes’ three daughters, Melina comes from a large, extended second-generation Greek-American family. “In most Greek families we have large extended families,” she explains. Family is an important part of Kanakaredes’ life, and she won’t mix business with home life. When asked about her husband and two daughters, she decides to “pass” on the inquiry, but will confirm her interest in bringing expression through theater to her children. “We have a theater in our backyard and have performed many musicals over the last five years ranging from Peter Pan to, most recently, Hairspray.”

What’s been good on the home front so far is that Kanakaredes’ children hadn’t realized their mother was a star until Hannah Montana, a show about a young girl leading a double life of fame and civilian life, debuted on the Disney Channel. “They know what my job is, and thanks to Hannah Montana, they understand it is two separate things. So yes, we get the best of both worlds.”

In her role as Detective Stella Bonasera on “CSI: NY,” Kanakaredes portrays a character that’s much different from that of Hannah Montana and inhabits a tough world where she investigates forensic crime in New York City.

PM: Does Detective Bonasera resemble any aspect of your own personality?

MK: I was always great at the Parker Brothers board game Clue.

PM: Any aspirations to work behind the camera?

MK: I have my DGA (or Directors Guild of America) card and have directed several projects.

PM: What was your first job?

PM: What was your worst job?

MK: A Foodland commercial that was also shot in Pittsburgh—I was a singing carrot.

PM: What would people be surprised to know about you?

PM: If there were one thing you could change about yourself, what would it be?

MK: Flaws and attributes are what make a person who they are, so I wouldn’t change a thing.

PM: Where do you escape on your day(s) off?

MK: Anywhere with my children.

MK: Yes, as a matter of fact, I have. The last book I read was a novel by Sara Gruen called Water for Elephants—great perspective on life and getting older.

PM: Whom would play you in a movie?

MK: All depends on who writes the script.

PM: Whom would you like to have dinner with?

MK: This actually came true this past June when I had dinner with the pope and the Greek Orthodox patriarch.

MK: Buying a conservative wardrobe to meet the pope and the Greek Orthodox patriarch.

MK: Loving what you do and being good at it.

MK: If it’s worth doing, do it right now.

This article appears in the August 2008 issue of Pittsburgh Magazine.
Categories: Arts & Entertainment