Meet the Woman bringing Dignity and Diversity to Twitter

As Twitter's vice president of intersectionality, culture and diversity, Candi Castleberry Singleton, who splits her time between Pittsburgh and San Francisco, works tirelessly to bring inclusion and respect to companies. 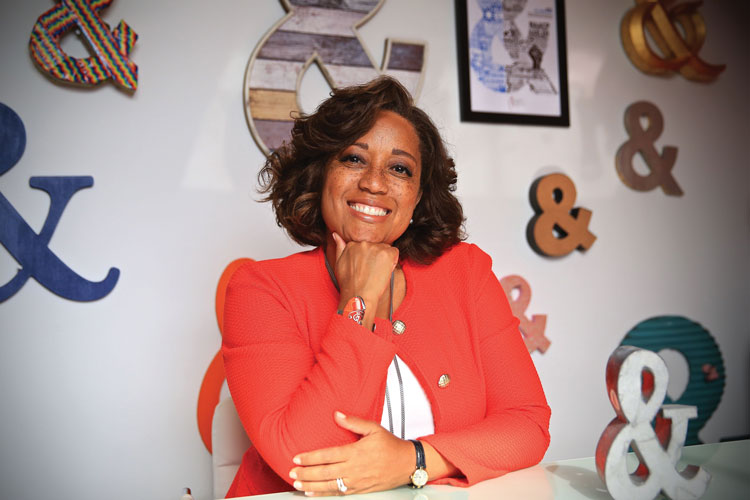 In her first few months at Twitter, Candi Castleberry Singleton invented the “grow together elbow.” It was a creation of necessity: Since Twitter’s San Francisco headquarters has no permanent work stations, the company’s new vice president of intersectionality, culture and diversity found herself carrying her laptop and coffee to meetings, making it tough to shake hands.

Without a free hand, the Los Angeles native started bumping elbows. “It is a way that I think crosses fewer cultural boundaries than shaking hands,” she says, “and quite honestly, coming from healthcare, it’s a way you don’t have to worry about people washing their hands.”

Castleberry Singleton, who splits her time between Pittsburgh and San Francisco, says her seven years working as the chief inclusion & diversity officer for UPMC gave her a greater degree of understanding for people who don’t consider themselves part of the diversity and inclusion conversation.

After working to improve diversity at Walgreens, Motorola and Sun Microsystems, Castleberry Singleton had experience to address the tough, perpetual problem of the lack of diversity in the tech field; when she joined Twitter in July, recent company data showed Twitter’s employees were only 37 percent female; underrepresented minorities made up 11 percent of employees.

While she acknowledges that improving patient interactions from a diversity and inclusion perspective at UPMC was more important than any work she had ever done, she is excited to be back working in tech at a company with global reach.

What challenges did you face at UPMC — and what legacy did you leave?
CCS: Healthcare misses the opportunity to think about cultural awareness and faith as one of the largest decision-making criteria for individuals … Patient experience is not necessarily something that people associate with diversity and inclusion. But if you think about immigrants, refugees, if you think about people who have English as a second language, people who have never experienced an American healthcare system, people who have different traditions for sickness, [as well as] dying and death and the LGBT community, you can imagine that there was a huge body of work there that wasn’t necessarily associated with diversity prior to us forming what was then called the UPMC Center for Engagement and Inclusion.

You’re the founder of the Dignity & Respect Campaign, which promotes inclusion and diversity at work and in organizations. What’s the origin story?
CCS: There’s a longer story about why the Dignity & Respect Campaign got started, and it has to do with trying to get an apartment in Pittsburgh and it not working out in a way that made me feel respected … It was probably the first time that I connected the word dignity and respect together because it was the absence of respect that for me was feeling like it was challenging my dignity … I had two options: I could take up my Berkeley roots and put up some picket signs outside and turn it into more than perhaps it was, or I could do something about it that perhaps will let other people learn.

What’s the day-to-day experience like taking on a role like yours at Twitter?
CCS: They believe in the mission of informing and uniting the world. They believe that the platform has the ability to do just that, and I would say the way inclusion and diversity fit into that picture is that in order for us to unite in a world, we must all acknowledge that we’re not all going to be the same, and we have to create space for all of us to coexist.

Give us your view of the current diversity landscape in the tech world.
CCS: One of the things that I’ve learned over the course of doing this work for many years is the absence of diversity often has more to do with favoritism than it has to do with discrimination. What I mean by that is that people generally hire their friends … I often challenge people: If I asked you to bring five of your friends to this room tomorrow, would your contribution be five people just like you? Or is your network diverse enough to bring diversity with you?

What goals do you have on your bucket list — personally or professionally?
CCS: I believe that we will see great things continue to come from Twitter, continue to come from our purpose of uniting people on our platform, helping people to understand what’s happening in the world beyond their own communities, understanding what they can do to help unite the world. To be a part of a team and an organization that is at the forefront of doing that, [there is] not a better place to be. That is my bucket list. To be able to do that is the bucket list experience.

This article appears in the March 2018 issue of Pittsburgh Magazine.
Categories: Business