Meet the TV Producer Who Was (Literally) Behind Kermit the Frog

A primetime pioneer, Jerry Hughes was made for TV. 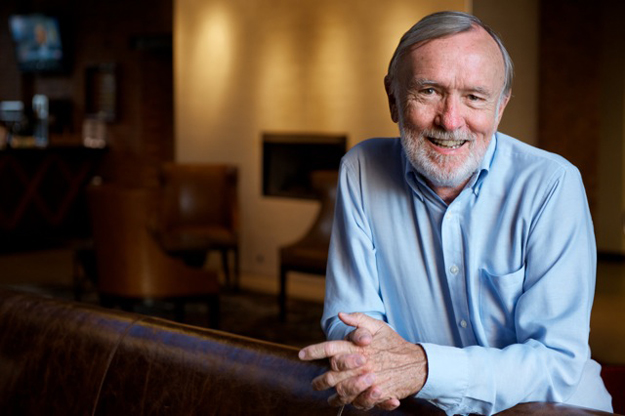 Pop quiz: What do Kermit the Frog, the rapper Coolio and Ronald Reagan all have in common? They’ve all worked with Jerry Hughes.

Hughes, whose Strip District loft is adorned with framed photographs of himself with Fred Rogers, “Dating Game” host Chuck Barris, President Reagan and a 13-year-old Sarah Jessica Parker, has seemingly gone everywhere and met just about everyone throughout the course of a decades-long career as a television producer and director.

Hughes, 72, still runs Hughes Television Productions, a Pittsburgh-based company that handles remote video shooting all over the planet for clients like Columbia Pictures Television (Sony/Tristar) and MTV. He boasts that he’s only been unemployed for two weeks during the 40-plus years he’s been in show business—an incredible feat for such a mercurial industry.

Throughout those years, Hughes has traveled to some of the world’s most exotic locales to shoot (and sometimes direct) remote segments for soap operas like “The Young and the Restless,” conducted intimate at-home interviews with America’s biggest celebrities for “Entertainment Tonight,” directed TV appearances for four sitting U.S. presidents and even operated the left hand of Kermit the Frog for a directing gig on a PBS special.

Remember all of those factory tours on “Mr. Rogers’ Neighborhood,” the ones where Mr. Rogers showed you how things—from fortune cookies to guitars—are made? Hughes Televisions Productions provided the equipment and crew to shoot those (with Hughes taking on the role of director of photography every so often) as part of a long collaboration and friendship with Rogers that changed his life and made him a better person, he says.

Here are highlights from a recent conversation with Hughes about his life and career.

Of the four presidents you’ve worked with—Ford, Carter, Reagan and Clinton—who had the best TV presence?
Clinton was the most natural person on camera. He is very charismatic. Reagan was a great orator, but he was always kind of acting.

How did you get started in show business?
While I was a business major at Notre Dame in 1961, I worked at an NBC affiliate station that was owned by the university. During the final semester of my senior year, I got the daytime director’s job. After a stint in the Navy, I went right to Hollywood, where I started as a page. My job was guarding Bette Davis’ dressing room. I didn’t want to wear the silly page uniform, so I left to do the cue cards for ABC’s “The Dating Game” before leaving to work for Chuck Barris as a production assistant and then as an associate producer from 1966 to 1969.

What brought you to Pittsburgh?
I was at a Hollywood party in 1980 when I ran into a guy from Pittsburgh who was looking for a producer to do something with Jim Henson, creator of the Muppets. WQED got funding to do a puppetry program with Henson called “Here Come the Puppets.” I was ready to back out of the deal when he asked how quickly I could come to Pittsburgh. But I produced “Here Come the Puppets.” I stayed in Pittsburgh, formed an independent production company and became the go-to guy for “Entertainment Tonight” segments shot east of the Mississippi.

Who did you meet while working for “ET?” Any highlights?
[Steelers legend] “Mean Joe” Greene was [featured on] one of our first segments of “ET.” My favorite moment was when Jimmy Stewart got teary-eyed when I asked him about his hometown of Indiana, Pa.

What do the younger employees at MTV, VH1 and Spike think when you show up to do a location shoot for them?
The 24-year-old producers are very reluctant to work with me at first, a 72-year-old cameraman. But they soon see that I am physically fit. I did a shoot at Diesel Club Lounge in South Side with Coolio. My son put a picture on Facebook with the caption: “My dad is cooler than you.”

Is it true what producers, directors and crews are saying about Pittsburgh—that it’s a good place to work?
I am a big proponent of the tax credit for films. It’s a non-polluting industry. They come and spend a lot of money. Batman was here filming, and they did not even get the tax credit. Why? The crews here have 25 to 30 years of solid production experience.

What was it like working with Fred Rogers?
He was exactly the way he was on TV. He would always listen to what you had to say, and he had the utmost respect for the people who worked on his shows.

Can you believe that his show stayed on the air for so long, given what else is shown on TV?
I feel great nostalgia for what he brought to TV. When I was a program director at KCET, my mantra was “When television fails to educate, inform or entertain you, turn it off.” That didn’t make me popular with other program managers. I’m not rich. You pay a price for that in this industry. I love the business, but I have standards.