Don Wadsworth followed his inner voice, which led to a life of coaching actors on their dialects. 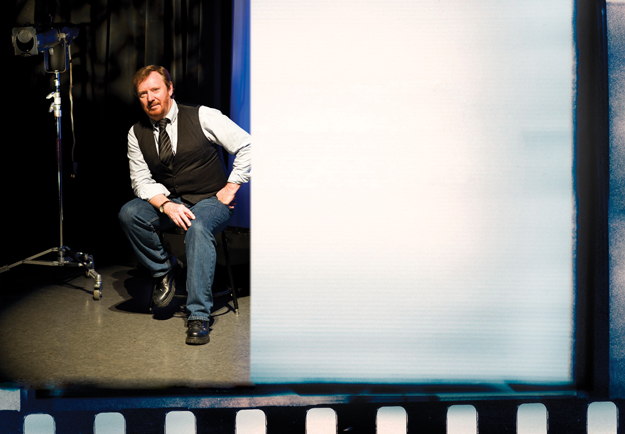 Though Pittsburgh is an increasingly popular location for major film productions, it wasn’t always that way. Years ago, it seemed impossible to make a name in the industry without moving to New York City or Hollywood. Don Wadsworth was an exception. As an actor, dialect coach, and voice and speech professor at Carnegie Mellon University, he has certainly made his mark in show business.

Growing up in Plum Borough, Wadsworth caught the acting bug as a teenager after his mother presented him with a volume of Shakespeare recordings. “I just drank that in,” he remembers. “[That was] not a typical teenage activity, especially for me out in the middle of nowhere. I literally had a cow as a neighbor.” Wadsworth took classes part-time at the Pittsburgh Playhouse School of Theater until the American Conservatory Theater (A.C.T.) moved into the Playhouse.

“I was 17, so I was too young to actually get parts, but I learned from incredibly good actors,” he explains. “One of the teachers we had, Edith Skinner, was also the voice coach for the company.” A veritable legend in the voice-coaching community, Skinner encouraged him to pursue his talent for picking up dialects. Eventually, one of Wadsworth’s directors asked him to help a fellow actor perfect his accent. He was brought back time after time to help casts with their dialects. Coaching became Wadsworth’s passion and, eventually, his career.

His portfolio spans theater, film, television and video games. Throughout the years, he helped award-winning actors, such as Bob Hoskins, Olympia Dukakis, Ellen Burstyn and Danny Aiello. He served as the dialect coach for flicks like Adventureland, The Road and Warrior in addition to appearing alongside Dennis Quaid in Smart People. He was the voice and dialect coach for numerous theater companies and also covered the voice work for the PBS mini-series The War That Made America. Most recently, Wadsworth began coaching Jane Seymour for the ABC Family original movie Elixir. After finding time in his jam-packed schedule, Wadsworth spoke with Pittsburgh magazine about his career as an educator, actor and coach.

PM: How do you perfect each dialect?
DW: It’s very specialized, and once you know how to do five, eight or 10 of them, you know how to do them all, really. There are only so many recipes for that sort of thing. You can find genuine examples of very specific accents now on sites like YouTube, but there are other places as well. When you study [dialects], the best way to do it is to find someone who actually owns the accent, rather than just an actor. Then what you have to do is really translate it into the phonetic language. That’s what I learned from Edith Skinner; she taught us that every sound we make has an accompanying phonetic symbol.

Why was Edith Skinner such an inspiration to you?
Her ear was amazing. And because she taught using the phonetic skills. She got a few of us to enjoy that ability we seemed to have.

What would you say is the biggest challenge?
The goal is to keep the actors consistent so it’s always believable. That is one of the challenges. The other is to find out what the actors do well and capitalize on that. There are a number of ways to attack, especially if it is an American dialect. There is not just one way to do, say, a Southern accent. You try to find somebody’s strength and go with it.

How do you make the shift from teaching to acting?
Teaching keeps you on top of it all the time. There have been occasions when I have acted with my students and you feel like you have to be a really good example. I think the best way for me to teach is to do it. It’s not something you learn on a page—you have to hear that thing. I stay pretty active and current because I’m teaching it. The thing I am not teaching—[but receive many requests for]—is getting rid of accents. In Warrior, I had to get rid of all the British and Australian, and make it sound American. That’s something I don’t teach at all but have done several times with Bob Hoskins and many other people I have been lucky enough to help.

Of all the dialects you know, which one is your favorite?
Because of the way I look, it’s all British. My mom was Scottish, and my dad’s a little bit English. The roles I’ve played like that have been mostly British—so in that family, but I don’t care. You wouldn’t know it to look at me, but I think I’m pretty good at teaching actors South African. Coming out of this face, it’s a very odd thing.

Is it difficult to balance your career as a professor, coach and actor?
If I had to choose among those professions, I would be a teacher first. I could give up the acting with no trouble. Fortunately, I don’t have to make that choice. I have been able to say to anybody on a film that “I [am available] these times and dates—if you’re OK with that, I can do it, and if not, I can’t.” I cannot give up school because I owe those kids too much. No one has ever said, “We can’t work around those dates.” How about that for luck?

This article appears in the November 2011 issue of Pittsburgh Magazine.
Categories: Arts & Entertainment