"That famous Polish Lighting Designer," as he's been called for years, lights up Pittsburgh's stages like no other. 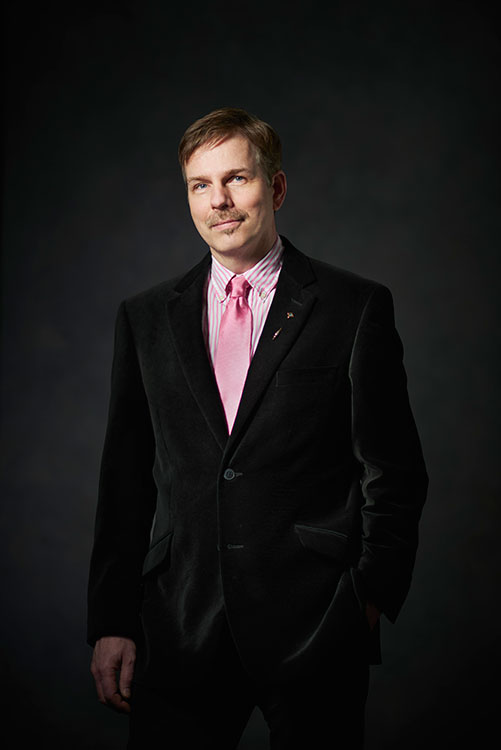 Little did Andrew “Andy” Ostrowski know when he accepted his first union gig as a lighting designer 25 years ago that he would walk out of the production with a new nickname.

The show was David Mamet’s “Speed-the-Plow,” starring Ming-Na Wen, for the Pittsburgh Public Theater. The stage manager, who happened to be a friend, wanted to make the newcomer feel at ease at his first production meeting, so she introduced Ostrowski as “That Famous Polish Lighting Designer.”

“We all laughed,” Ostrowski says. The moniker stuck.

Because the show occurred around Ostrowski’s birthday, the crew gifted him with a pen set inscribed with the acronym “TFPLD” for his desk. Later, when he needed to come up with an email address, he simply looked down at his pen set and, “there it was: TFPLD.” (It’s also his website address — tfpld.com.)

Some may even argue that Ostrowski’s Lawrenceville row home, resplendent with light, qualifies as yet another design sample. “I bought in Lawrenceville before Lawrenceville was Lawrenceville,” he jokes. You also could say he’s been lighting in this city since before Pittsburgh, as an arts center, was Pittsburgh.

Where did you train?
I started out at Slippery Rock University as a computer science major and then switched to communications after my first year. Back then, theater was housed under communications.

What made you want to specialize in lighting?
I loved my set-design class at Slippery Rock, but when I interviewed with the CLO for an internship, they didn’t have one in set design — only lighting. So I took it.

What was your first gig?  My first job out of college was literally as the technical director, set designer and lighting designer for a community summer theater called Sherwood Forest in Murrysville.

How did you get from there to “Speed-the-Plow?”
I took a spring/summer job in 1987 working as master electrician for Busch Gardens, and I volunteered to light their after-hour events for the experience. That fall, I started at the Public Theater … on a show-by-show basis. I also took a job lighting shows for Club Med in the Dominican Republic every night for seven months and then worked another season at Busch Gardens before the Public offered me a full-time job as its assistant ME [master electrician] in 1988. That led to the ME job a year later and my first equity show.

What are some shows people would be surprised to know you lit?
I once lit an after-concert party for Guns N’ Roses at Three Rivers Stadium. I lit a European tour of “Porgy and Bess” and got to meet Anne Brown, the original “Bess” on Broadway, at an opening-night performance in Oslo.

Tell me one of your lighting stories.
When the Pittsburgh Symphony approached me about lighting Ravel’s “Boléro,” I did a lot of research and found that his father was an engineer and took him at a very young age to a factory. That memory was the inspiration for “Boléro.” And so I knew I was just going to use the lighting to build. The piece began in darkness with one spotlight on the conductor, and then I added light from there at the start of each movement — 16 in all. I actually got to take a bow. [Editor’s note: He got a standing ovation.]

How much has Pittsburgh’s performing arts scene changed in the years you’ve been lighting it?
There are a number of working artists in the city today and back then, we couldn’t say that. City [Theatre] was still in its 99-seat Oakland space, Quantum and PICT weren’t around, and neither was the CLO Cabaret. Plus, the Pittsburgh Cultural Trust was fairly new. Now we have enough companies to keep actors around, to keep designers around, to keep technicians around. It’s great.

This article appears in the July 2015 issue of Pittsburgh Magazine.
Categories: Arts & Entertainment