At CMU’s Human-Computer Interaction Institute, Chris Harrison comes up with personal gadgets of the future. 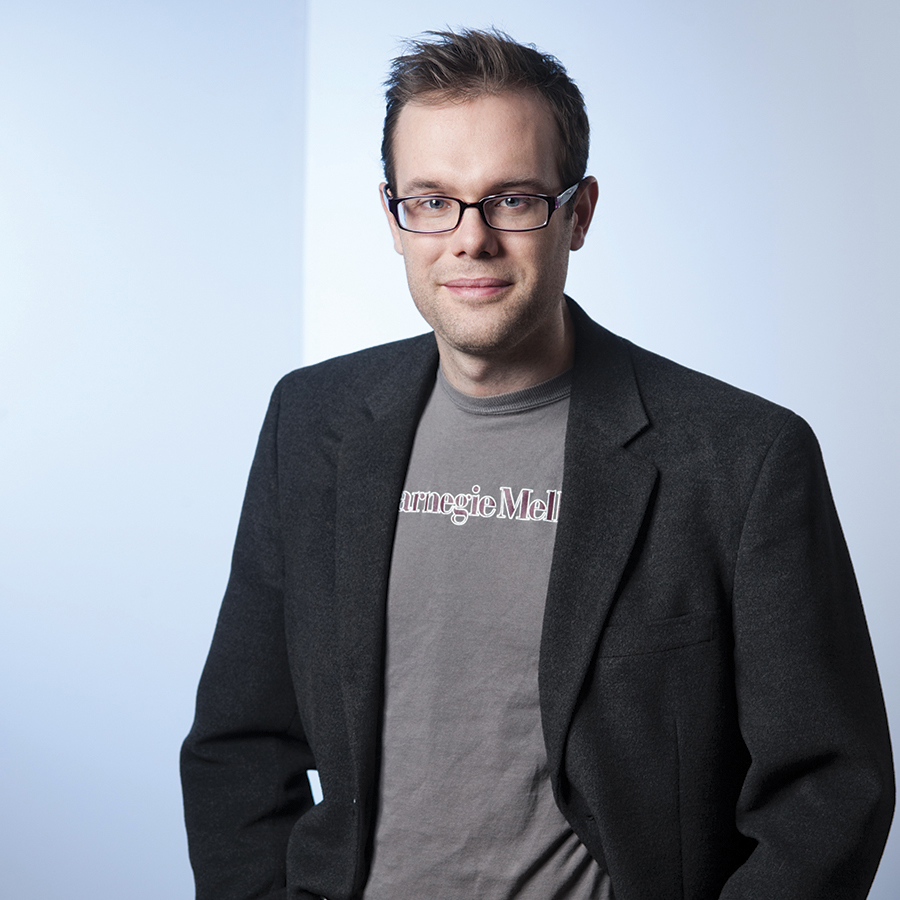 At the Human-Computer Interaction Institute in Carnegie Mellon University’s School of Computer Science, a consortium of computer scientists, designers and behavioral scientists is trying to determine how technology can best fit into our daily lives. The institute acts as an incubator of sorts for the personal gadgets of the future.

Dr. Chris Harrison, a one-time Ph.D. student at the institute who recently signed on as a professor, has been at the forefront of some of the school’s coolest projects. He and his team came up with Skinput, a wearable device that projects an interactive computer “screen” onto the skin. It allows you to do everything from activate a home security system to turn on the subtitles of a DVD by tapping a few photon “buttons” projected onto your wrist. They also birthed Zoomboard, a tiny keyboard made for smart watches that can zoom into a QWERTY set of keys as the user taps a touch screen, allowing for easier typing.

He’s currently working on FingerSense, a touch screen that responds as certain objects press against it. Imagine a tablet art program that draws in response to the tip of a pencil, saves the work in response to a fingertip and presents a color palette in response to a knuckle. Harrison, 29, also designed wedding bands for himself and his fiancée and built his own raft for a 35-mile journey down the Allegheny River.

Out of the specialties you could pursue, why human-computer interaction?
Computers have gotten really, really fast, so much so that we never really max them out. Operating systems used to crash all the time. I remember as a kid, the computer would freeze and I would lose my homework. Nowadays, I don’t reboot my laptop [for] months. So I had to ask: What are the interesting questions left out there? Well, the usability of machines is really lackluster. When you use a smartphone, there is a lot of frustration about that experience, so I wanted to take my computer-science knowledge and apply it to human problems, not the internal operations of a computer.

What determines what you work on? Do we need a wearable “Skinput” projection system or a zooming keyboard? Or do those just present a challenge?
Those two projects are sort of polar opposites. The thing where you have a worn projector, we probably don’t need that right now. What it’s meant to do is probe a little bit into the future and see: If we can do this, what can we do with it? You can’t really answer that question until you’ve glued together the prototype. This has been true for computing for a really long time. When researchers invented text messages, they never thought anyone would laboriously type a bunch of messages to their friends when they could just call. Zoomboard, on the other hand, is tackling a problem we have right now. Smart watches are becoming very popular, and putting text into them is horrendous or impossible.

What do you see as the next piece of technology everyone will own?
I think it will be something like the smart watch or Google glasses — something [that] is worn on the body, is always accessible and is always on. That’s an extension of where personal technology has moved. First we had the computer. Then there was the laptop, which you could take with you. Then there was the smartphone, which you have on your person. The next thing will be on the body.

What do you think the Apple Store will look like going forward?
I think a lot of the same devices will be for sale. There might be some additional things. The thought used to be that we would move to one device, one thing that would be your phone, camera, computer, radio [all in one], but more [often] we see people [buy more gadgets instead.] If you’re at the bus stop, you won’t want to take out your laptop, and you wouldn’t want to write a paper on your phone. It’s like a toolbox; you need wrenches and screwdrivers, different things for different jobs.

You also study older technology. Your master’s thesis was on the slingshot. Why was that of interest?
The sling has been a backburner hobby of mine since high school. As a piece of technology, it is so simple. It’s two strings and a pouch. The skill component relies entirely on the user, not the weapon. There’s an intimate bond between sling and slinger that’s lost between many technology artifacts. And it has a really long history, [from antiquity] to the Greek Civil War of the ’30s.

So, you and your friends built slings in high school?
That — and a catapult.

This article appears in the March 2014 issue of Pittsburgh Magazine.
Categories: Community Feature