The Mt. Lebanon resident uses salvaged wood, tin and nails to create her pieces. Her work is now being showcased at Contemporary Craft in the Strip District. 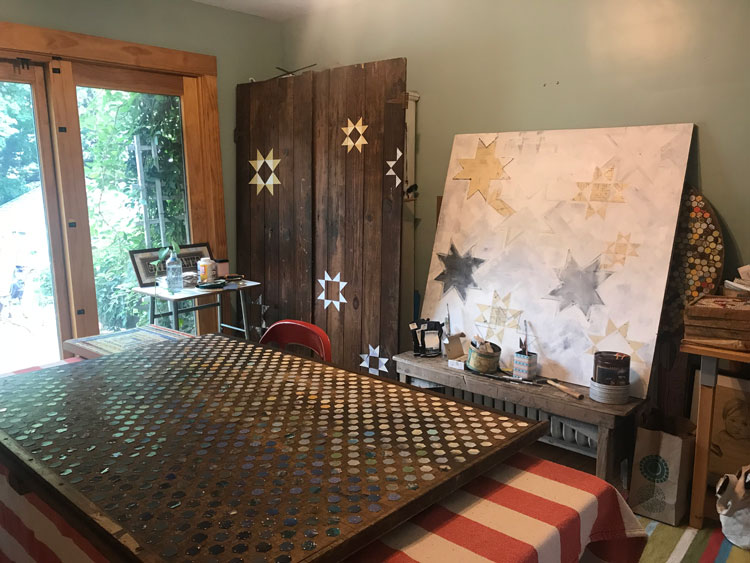 Kim Fox is a quilter — but she doesn’t use the typical materials.

Fox, 46, is an artist who lives and works out of her home in Mt. Lebanon, where she uses salvaged wood, tin and nails to make her quilts. Influenced by nature, and shaped by her experiences growing up in rural Western Pennsylvania, her most well-known work imitates the hexagonal patterns of honeycombs and focuses on organic themes.

Fox says her use of tin was inspired after she had her first child, Whistle, now 12. She and her husband, Steven, attended a workshop at the Society of Contemporary Craft in the Strip District hosted by Robert Villamagna, a tin artist based out of West Virginia.

“Honestly, we just took the workshop because we had a baby, and my mom offered to babysit. And so we were like, ‘Let’s pick the longest workshop so that we can get the whole day together,” Fox says. “I loved it, and it kind of like brought together a whole bunch of things that I liked.”

Fox originally earned a degree in printmaking from the College of Charleston in Charleston, SC, in 1994. She still creates and sells prints on her website under the name Worker Bird — a derivative of her husband’s nickname for her, Bird. But tin appealed to her in a way other materials hadn’t.

After the workshop with Villamagna, Fox made a housewarming gift for a friend out of tin. Other friends took notice, asking her to make their home addresses out of tin — and it snowballed.

While her work has often been mistaken for quilting, Fox says she hasn’t always feel comfortable identifying her work as a contemporary twist of the craft.

“I just had this idea in my head that quilting was for grandmas,” Fox says.

After deciding to research traditional quilting, she stumbled upon the Quilters of Gee’s Bend — a group of women who live in an isolated settlement in Gee’s Bend, Ala.

“That was like, badass. Like these women are amazing, this is great, this was not the grandma sitting around making tea cozies that I thought it would be,” Fox says. “That just sort of lit me on fire.”

Since combining the influences of quilting and tin, Fox has developed specific processes that guide her work. Rules governing color, texture and shape give her direction — typically, one remains constant while the others can vary.

Fox exclusively uses salvaged and reclaimed materials, which mirrors themes of repurposing and refurbishing in work by Villamagna and the Quilters of Gee’s Bend. Many of her tins are collected at estate sales, where she says vintage tins collect in the basements of homeowners who don’t want to throw away or recycle them. As soon as she arrives at a sale, she beelines for the basement and often finds shelves of them to salvage.

“I want to find the tins that nobody wants and find a way to give them new life,” Fox says. “I really like the challenge of only being able to use what I find on the tins. I don’t paint them at all. I don’t alter them in any way.”

Similarly, Fox only uses salvaged wood as backdrops for her art. One of her popular pieces, titled “Honeycomb,” is made from reclaimed wood from the former Jeanette Glass Factory in Jeannette. Fox saw potential in the distressed, circular wood molds used in the glassmaking process at the factory, which closed in 1983. She utilizes them in many of her honeycomb pieces as backdrops, which she nails tin hexagons to.

“The idea of salvaging, and reusing, and taking something awesome and turning it into something new really appeals to me,” Fox says. ““You could never replicate this with new wood … to me, it wouldn’t have any [character].”

Aside from her tinwork, Fox does narrative murals by commission, as well as prints, paintings and illustrations. To see more of Kim Fox’s work, visit her website.

This article appears in the September 2018 issue of Nest.
Categories: Nest