McCutchen and Bettis Share a Pittsburgh Moment on SportsCenter

#Flicks: Russell Crowe to Return to Pittsburgh to Film ‘Fathers and Daughters’


Once you go ’Burgh, you can’t go back. If you’re Russell Crowe, at least.

Just more than three years after visiting the Steel City for the first time to shoot the crime thriller “The Next Three Days” and heaping love all over the place, the Oscar-winning actor is returning (along with “Breaking Bad” star Aaron Paul) in April to shoot a new film. Presumably because he missed us.

That, or he heard rumors about all the new pierogi iterations we’ve whipped up in his absence.

According to the report from the journalistic sleuths over at the Pittsburgh Business Times, Crowe is set to star in the film “Fathers and Daughters,” which — as you hopefully didn’t guess — is about a love affair between a father and a daughter, alongside Paul and actress Amanda Seyfried. Gabriele Muccino, whose previous credits include “Seven Pounds” and “The Pursuit of Happyness,” will direct.

The Business Times went on to report that representatives of the film have been scouting locations and making living arrangements for the crew, and Pennsylvania’s already approved the film’s tax credit application.


It may not be cold enough for us to throw pots of boiling water into the air or blow ice bubbles, but the recent bout of cold weather has created some stunning shots of the frozen Ohio, such as this. 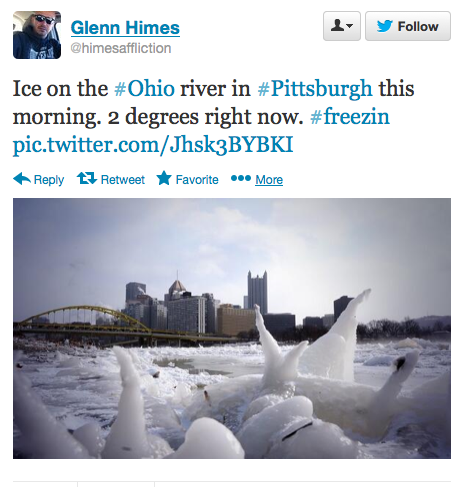 #Lists: Huffington Post calls Pitt one of the ‘most interesting places to go to college’ but doesn’t get what makes it that way


List-tracking seems to have become a Pittsburgh hobby of sorts. For good reason, seeing as we make a lot of them. The problem is, as much praise as we get from these lists from media outlets on the coast, most of the praise gives us the sense that these folks don’t really “get” Pittsburgh.

Case in point: The Huffington Post just slotted the University of Pittsburgh into its list of “The Most Interesting Places to go to College.” While other colleges were gushed over for the quirky location, sports and the ability to be a big fish in a small pond, Pitt got this:

“Where else can you study in the second-tallest academic building in the world that looks like Hogwarts on the inside and sometimes gets lit up in pretty colors? The city is gorgeous and hosts one of the most ‘hipster’ ZIP codes.”

To recap, Pittsburgh’s got eye candy and a “hipster” ZIP code — and students get a really tall academic building. Talk about getting the short end of the stick. How about world-class museums, a cutting-edge foodie movement, great bars, sports stadiums a short trip from campus and 90 totally different neighborhoods that each have something unique to offer?

Sorry, Huffington Post, but we’re more than just a bunch of hipsters with a pretty skyline.