McCook Mansion of The Mansions on Fifth

One of Pittsburgh’s most stunning homes, the McCook Mansion of The Mansions on Fifth, has been brought back to life, and its rebirth is celebrated this holiday season.

A family estate nestled along Fifth and Amberson avenues in Shadyside, The Mansions on Fifth are comprised of two historic mansions, the McCook-Reed Mansion and the McCook Mansion. Once private homes, the mansions have been restored into luxurious guest rooms and suites. The Mansions also serve as a premier venue for private parties, weddings, business meetings and retreats. Built in 1907 by the McCooks, a family at the forefront of Pittsburgh society, the McCook Mansion has been saved by other locals, Mary Del Brady and Richard Pearson.

Brady and Pearson have spent the past year restoring the McCook Mansion with the help of their daughter, Jennifer. Take a peek inside this reborn treasure, which remains a wonderfully curious mix of grand glamour and homey warmth.

Willis McCook, attorney and close business associate of Henry Clay Frick, wanted to build a home that felt like a spectacular English Manor home for his wife, Mary, and their 10 children. In 1907, he did just that, commissioning a stunning granite mansion and a smaller companion home for one of his daughters on Fifth Avenue.

The McCook home had real warmth, unlike many of the cold, marble palaces along what was once called “millionaire’s row.” And the extensive woodwork, intricately painted ceilings and softly glowing light fixtures that gave the house its charm, have now been carefully restored.

For two decades, this three-story home was the site of lavish holiday celebrations filled with family and friends. But after the McCooks passed away, the Depression hit, and the house fell into receivership.

In the 1950s, the Bonavita family bought it from the city for a reported $28,000. The family began renting rooms to college students, including architecture and design students from Carnegie Mellon University.

Mrs. Bonavita “interviewed and prescreened each of them,” Brady says, to ensure they would love the house and treat it as a home—not a crash pad.

“Over about 50 years, we’ve estimated [that] about 500 students have lived here,” Brady says. “Think how well taken care of it’s been.” Some former residents have been in touch with the new owners, and a reunion may happen next year. Many say they have fond memories of living with the Bonavitas in such a beautiful and inspiring home.

Tragically, a fire in 2004 damaged the attic and third floor, so the house was closed. It was up for sale, but the Bonavita family vowed not to sell to anyone who would demolish the home. 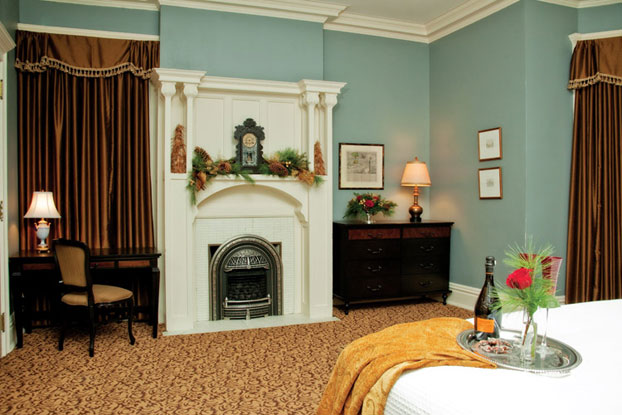 An original fireplace, with its mantle and elaborate enclosure carefully restored, infuses this second-floor guest bedroom with vintage style.

What inspired Brady and Pearson, both originally from the McKeesport area, to invest in this boarded up piece of history and imagine a new future for it? “It began with a passion for Pittsburgh,” Brady says. “We love the city. We love the transformation the city has gone through. … Pittsburgh still really honors its past.”

From the moment they saw the interior, they “couldn’t imagine not saving it,” she says. “That first floor is pure artwork.”
The project evolved from being planned as a bed-and-breakfast into what is now a full-service boutique hotel and gathering place for private events, Brady says. She also envisions it as “a place for very special retreats, masters classes and immersion classes where you can spend time with an author or with a poet.”

The guest rooms are unique and feel like bedrooms in a fabulous private home rather than hotel rooms. That was the goal. “We spent hours talking about the feeling we wanted people to have—the grandness, but also the personal, the comfort, the tranquility,” Brady says.

With help from designers at J.A. Lott Design & Associates, “the colors were chosen with a great deal of thought about creating warmth.” They opted for “furniture that would look period, be commercial in strength, but also at the same time be absolutely beautiful,” then combined those pieces with original items such as light fixtures and fireplaces.
The effect is enchanting—filled with history but updated with every modern amenity.

Last December, although the renovations were far from done, Brady and Pearson’s daughter was married at the house. This year, the whole family will celebrate the holidays in a style as grand as any McCook might have envisioned. And they’re inviting all of Pittsburgh to join in the celebration.

What tips can Pittsburghers draw from this stunning home as they do their own holiday decorating?

• A dash of holiday style belongs in every room, even guest bedrooms. But restraint is key: Focus on just one or two eye-catching decorations, rather than lots of trinkets.

• Attention to detail makes guests feel cared for. At the McCook house, it’s elements like intricately carved woodwork and finely sculpted ceilings. At your house this holiday season, it might be fresh flowers in every room.

This article appears in the December 2010 issue of Pittsburgh Magazine.