Why the Penguins may be better off without the amateur dentist. 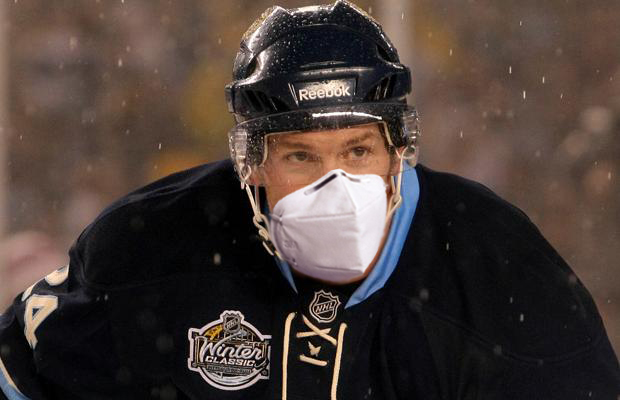 There was a particularly poignant moment in the final episode of HBO’s 24-7: The Road to the Winter Classic documentary, one that I thought would get more attention from fans who were so hungry to get a glimpse of the real Penguins—the guys who exist outside the shadows of boom mics and beat reporters.

For side-splitting voyeurism, you couldn’t beat the first three episodes of the series. The Penguins were red-hot. Craig Adams’s adorable little kid was running around the halls of the CONSOL Energy Center identifying Penguins’ hanging portraits as “Thid! Jordan! Daddy!” Max Talbot inevitably flirted with Santa’s helpers at the team Christmas party. Evgeni Malkin was his bizarrely charming self, a real-life incarnation of Balky from "Perfect Strangers," consoling Ben Lovejoy in broken English as his swollen face was being stitched: “You look good. Girls love.”

The scenes inside the Penguins’ locker room were proof that chemistry matters (it keeps the team focused on the road, where the Penguins are 21-10-6 this season), that head coach Dan Bylsma creates that culture from the top down (“Let’s grind these bitches down,” he instructs, in a Churchillian call to arms) and that the team is full of under-the-radar leaders.

Unfortunately, none of that stuff gave us any insight into the mental and physical war that ensues when the puck drops. It was merely background noise. Because what happens on the ice for 60 minutes is not about culture. It’s violent, unhinged and unpredictable. To fans watching from the birds-eye view of HDTV, players exist in a vacuum. They’re fast-moving ants who should be omniscient to all danger and should do seemingly automatic things like “shoot!” and “get the puck!”

Fans can see but not feel. As a player, you’re breathless, your hip is throbbing from diving on a slapshot, your knees are getting weak and someone just wrenched their stick into the soft spot between your shoulder pads and pants. In reality, playing in a hockey game is 10 percent wanting to score a goal and 90 percent wanting to kill the guy who just shoved his wet, stinking glove into your craw and tried to extract a molar.

Everything is unfolding at an absurd speed, and you’ve got a bloodlust that must be controlled. Harbored. Nurtured. Used as fuel.

Which brings me to Matt Cooke, the player I learned the most about during his brief screen time on 24/7.

“I swear to God, slash me again. I’ll take your teeth out, Nicky.”

This is what Cooke told Washington Capitals star Nicklas Bäckström during the third period of The Winter Classic, as the Penguins were trailing 2-1. As ink on a page or pixels on a screen, it may seem like an innocuous threat. But the Penguins were in desperate need of a Power Play, and Cooke’s words had weight. He was serious. One more cross-check and Cooke was going to turn Backstrom into David After Dentist.

But more illuminating than Cooke’s behavior, which Penguins fans have come to expect, was this exchange as referee Paul Devorski skated over to diffuse the bomb:

Earlier in the game after a scrum in front of the net, Cooke asked Devorski, “Seven cross-checks in the back or 10? How many’s allowed? I got seven—I’m just wondering how many’s allowed.”

To which Devorski responded, “If I missed seven, I might as well quit, Cookie. Seven f****** cross-checks I missed? Seven?!”

Devorski then turned toward the Capitals bench and, beside himself, said, “I just missed seven f****** cross-checks. I’m pretty f****** awful.”

It was an odd sequence, made even odder by the fact that Cooke was caught in the mouth by a high hit from Backstrom a period later, and nothing was called. Referees are human being, too. They have emotions and biases. Are they sick of Cooke’s shtick?

Much of Cooke’s perceived value to the team is based around the notion that he gets inside the other team’s heads. It’s the classic “hockey pest” trope. Instead of thinking about containing Crosby, they’re thinking about decapitating Cooke or not getting decapitated by him. Cooke is supposed to be the big-brother bully sticking his finger in their ear.

Only, one has to wonder, is it actually working the other way around at this point? Eventually, doesn’t the nerd use the bully as fuel? Doesn’t the bully eventually get what’s coming to him?

If the Penguins’ record against their fiercest rivals is any indication, maybe Cooke’s antics are counterproductive. Eastern conference opponents have brought playoff-level intensity to regular season match-ups, even without Crosby and Malkin in the lineup. Who’s pushing them?

The Penguins are a combined 6-14 against the Flyers, Capitals, Canadiens Bruins and Rangers. Cooke’s face is used as a dartboard in each of those locker rooms.

Yet on Thursday, when the Penguins entered the orange cauldron of the Wells Fargo Center in Philadelphia without the suspended Cooke, the Flyers seemed curiously subdued. The scrums were harmless, the energy controlled and the crowd never got the spark they needed to come alive. The Penguins, in savings their vigor for battles over pucks in the corner, not words in front of the net, played a perfect road game without Cooke in the lineup.

With the tempestuous 12-goal-scorer suspended for the rest of the regular season and the first round of the playoffs for pretending to be The Macho Man Randy Savage, the Penguins may indeed miss Cooke’s penalty killing prowess. But with Staal, Talbot, Adams and Dupuis all healthy, they still have the best corps of grenade-smothering lunatics in the NHL.

So as the Penguins gear up for The Second Season, another thought-provoking quote comes to mind. At the Penguins’ annual Skates and Plates fundraising dinner, Byslma took the stage and told the audience a little story about a woman who approached him while he was at a bookstore:

“A lady in the Barnes & Noble about a week and a half ago came up to me, touched me on the shoulder—true Pittsburgh, 60-year-old fan—and she says, ‘Excuse me, coach, I don’t want to interrupt, but I’m so proud of our boys.’”

I think that feeling is ingrained in the hockey movement that has swept over this town since Talbot and Marc-Andre Fleury delivered pizzas to the Student Rush line outside Mellon Arena some six-odd years ago. Maybe that’s why the force of Cooke’s egregious elbow to the jaw of the Rangers’ unsuspecting Ryan McDonagh could be felt clear through the television.

It hurt us more than it hurt McDonagh.

Until Thursday night, when it seemed a lot easier to root with our full hearts.