CEREMONY
Mary Beth and Paul exchanged vows at the Hayloft (887 West Mud Pike, Rockwood; 814/926-2779, blshayloft.com), a historic farmhouse in Rockwood, Pa. After walking down a sunflower-lined aisle and crossing a footbridge, the couple and members of the bridal party assembled on an island in the center of a pond, where Dr. Jeff Wentz, a close family friend, presided over the Quaker ceremony of self-uniting marriage. The service also included a Celtic hand-binding ritual as a nod to the couple’s Irish roots and a performance by Dracula Factory, a band made up of the couple’s friends. 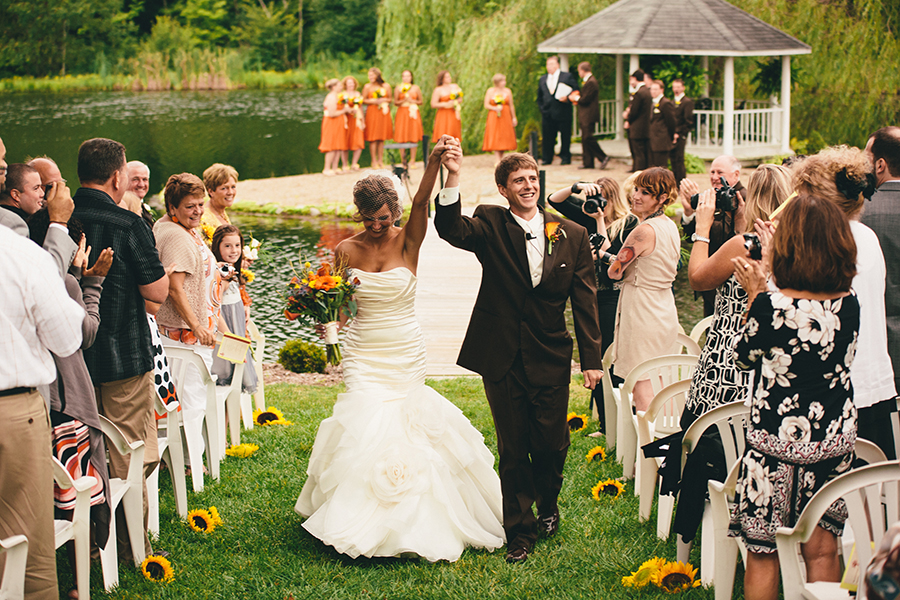 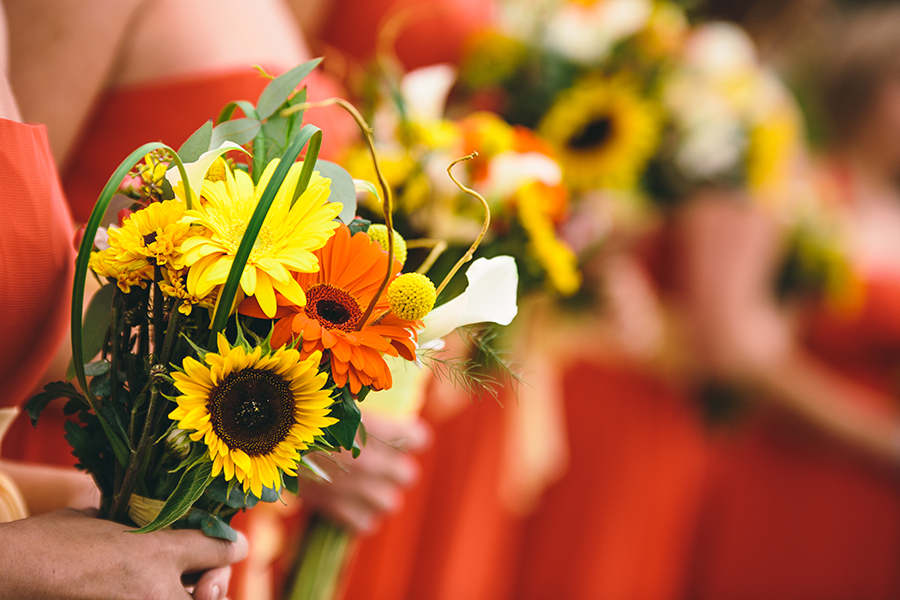 ON THE BRIDE
Mary Beth looked radiant in a Marisa dress from Bridal Beginning (450 Cochran Road, Mt. Lebanon; 412/343-6677, bridalbeginning.com). The ivory fit-and-flare gown featured a ruched bodice, a layered asymmetrical skirt and silk organza rose accents. The bride also wore a cage veil with a silk organza flower (Bridal Beginning), and she added her great-grandmother’s cameo pin to its center to serve as a classic “something borrowed.” She also wore cameo earrings that Paul had brought from Italy. 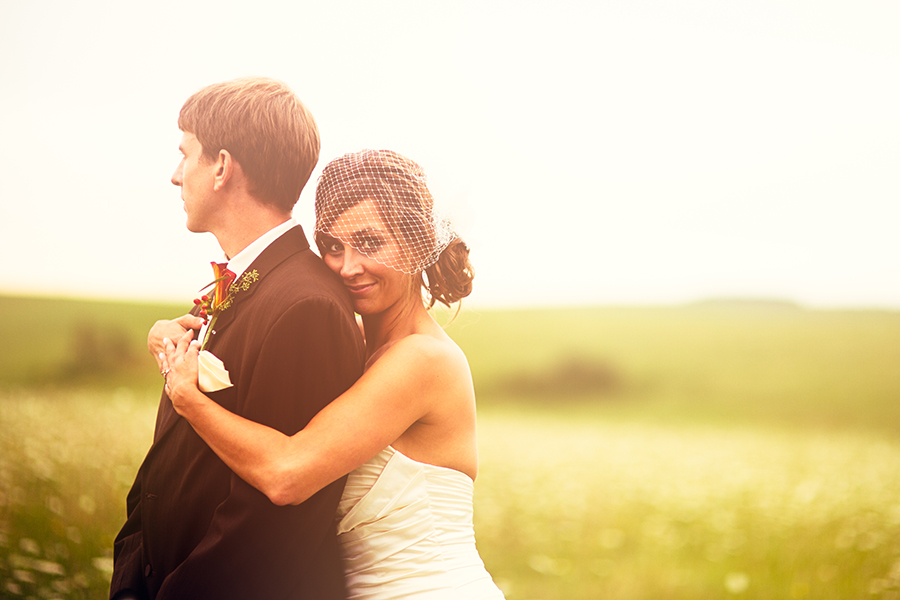 ON THE GROOM
Paul chose a chocolate-brown tuxedo with an ivory vest and necktie from Mens Wearhouse (menswearhouse.com).

Mary Beth and Paul were high-school sweethearts who reconnected in Italy while on study-abroad trips through their respective colleges, Clarion University and West Virginia University. Ever since, travel has played a major role in their relationship; because of this, they incorporated their love of traveling into their reception, naming tables after the different countries they’ve visited and marking them with photos. A rustic clothespin photo collage of Mary Beth and Paul’s adventures that was made by the groom’s sister, Stacy, served as the reception’s main decor piece. Stacy also crafted the couple’s card box — a mini pedicab made out of an old golf cart in honor of Green Gears Pedicabs (greengearspedicabs.com), a company owned by Mary Beth and Paul. 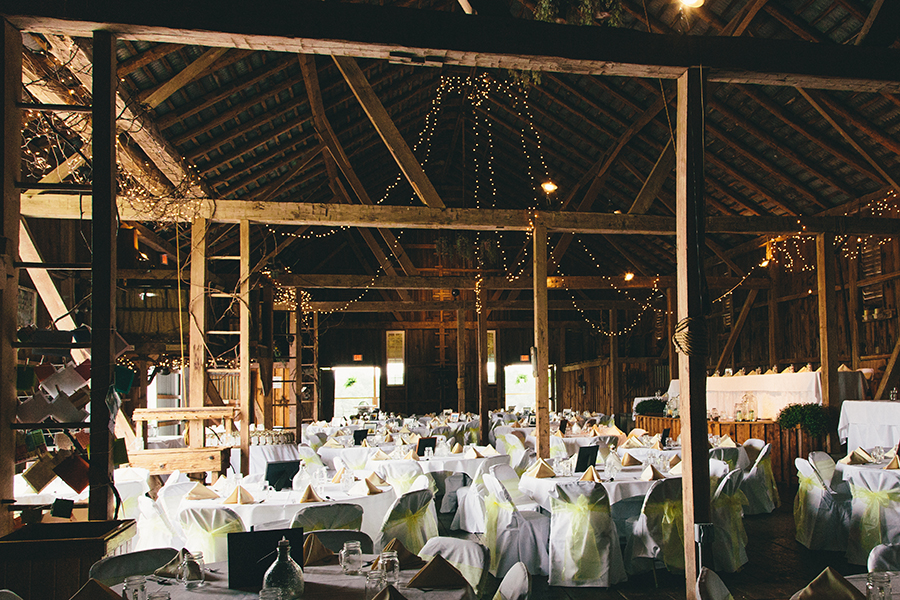 WEDDING COORDINATOR
Joel from the Hayloft’s staff helped put together all of the details for Mary Beth and Paul’s big day.

DESSERT
In lieu of a traditional wedding cake, the couple instead had a pie table provided by The Pie Shoppe of Ligonier (106 Earnhardt Lane, Laughlintown; 724/238-9536, pieshoppe.com). Chocolate mousse, coconut cream and berry were a few of the flavors offered. 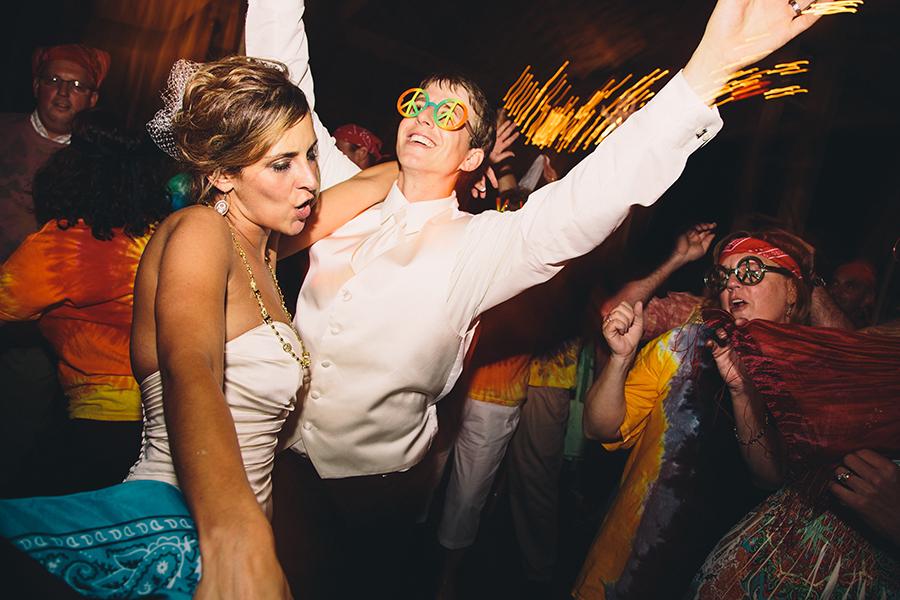 MUSIC
The Hayloft’s in-house DJ, Niki Ashbrook, played a medley of the couple’s Motown and modern-folk favorites. Skits are a tradition in Mary Beth’s family, so DJ Niki was also on hand to play “The Age of Aquarius” and other ‘60s songs when the bride’s relatives surprised her by entering the dance floor decked out in peace-sign glasses and tie-dyed pieces. The night ended with Lynyrd Skynyrd’s “Sweet Home Alabama,” a Hayloft tradition.