Mark Deklin wore many hats (including piano man) before appearing in "Desperate Housewives" and "GCB." 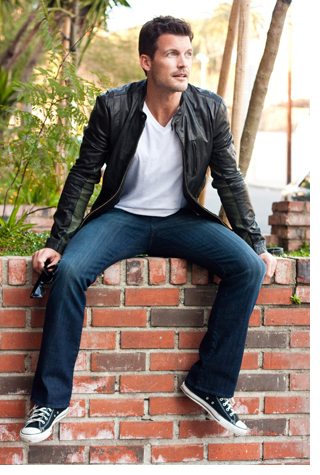 Mark Deklin has the strapping physique and chiseled features of a Hollywood star, but the Pleasant Hills native admits he tried a bit of everything else before committing to acting. He taught English, worked as an environmental activist for Greenpeace and even played piano in a Vienna bar.

Eventually, Deklin, 44, earned his master's degree; he's been acting professionally for well over a decade — appearing anywhere from Broadway (he played "Scar" in The Lion King) to Hollywood. And he's been on hit shows like "Desperate Housewives" (where he romanced Eva Longoria's Gabrielle). On his latest TV series, the darkly comic and controversial "GCB," Deklin plays a Dallas rancher with a secret. On the eve of its premiere, he talked about the challenges of show business and fond memories of Pittsburgh.

Your "GCB" character Blake seems happily married to his wife, yet he's a closeted gay man. That's an intriguing setup.
At first, I wasn't sure how to approach the role. I have many gay friends, but they're all out. So my question was: "Is Blake a tortured soul, like Heath Ledger's character in Brokeback Mountain?" The answer is no — Blake's really comfortable with himself. Overall, this is the most complex and enjoyable TV character I've played. A lot of that's thanks to [series creator] Robert Harling; he has a unique voice and such a specific understanding of the Southern world. I think people will be surprised at how funny the show is and, eventually, how emotionally honest it is.

Yet there are no guarantees in Hollywood. You were on the critically acclaimed series "Lone Star," which was quickly canceled. How do you handle that?
It requires a certain sanguine, Zen quality. You get to the point where you realize that there are things here that are completely out of your control. You can let it frustrate you, but I find it liberating. I've got a wife and a 2-and-a-half-year-old daughter, and I know I can always focus on going home and spending time with them. I'm not gonna sit around worrying if the audience will like us.

Growing up in Pittsburgh, you were passionate about sports, writing and playing in rock bands. How did those disparate interests lead you to acting?
Acting was always in the mix. I had a facility for it. But my dad was a building supplier, so I grew up on construction sites and I had that work ethic. I still do, and I'm proud of that — yet in that world, you don’t think of acting a "real job." So it took me a long time to wrap my head round the fact that it was something I could make a living from and respect myself for doing.

You were adopted. Now you help people find their birth parents.
I do it unofficially. I went through the process of finding mine, and it was complicated — when I was born, all adoptions were closed —- but it had such a happy ending. My birth parents were so welcoming and respectful of my adoptive parents, and vice-versa. I'm surprised by how many adoptees I meet, and they often ask me questions. So I've just made myself a resource for anyone who's interested.

Are you still active in environmental issues?
Taking care of the planet is important to me. I grew up with a love of nature, and I'm passing that on to my daughter. We took her on a whale watch, and we go see the dolphins at the beach so she can know how special that is. When she was born, my wife and I moved out of L.A. to a little surf town — we didn't want to raise her in the thick of Hollywood. Our town is laid-back, like what I had as a kid.

You often visit Pittsburgh. What's your take on your hometown now?
I grew up there in the '70s — the "Steel Curtain" Steelers, industrial days. Here's the cool thing: It still has the small-town feel but with that Eastern-urban clip to it. And it's changed for the better. It's cleaner and the quality of life is tremendous, yet the genuine friendliness of the people remains the same. I can be anywhere in the world, and if I run into a Pittsburgher, there's an instant bond and a shared sense of pride.

This article appears in the June 2012 issue of Pittsburgh Magazine.
Categories: Arts & Entertainment