March of the Toys

It’s fun and games at the Sen. John Heinz History Center as Howdy Doody, Barbie, Chewbacca, Slinky and other toy stars from the 1950s, ’60s and ’70s help to revive those happy childhood days of yesteryear. 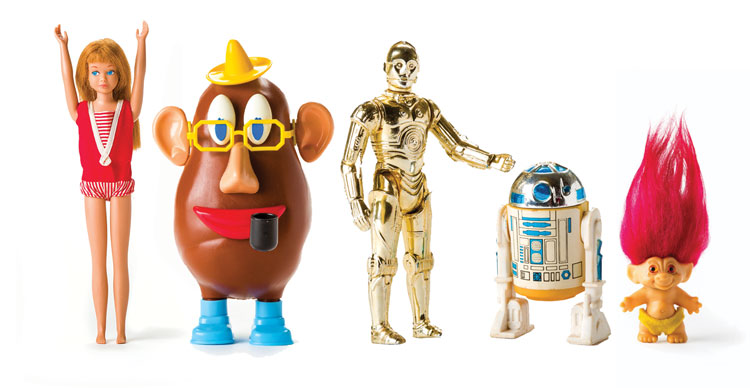 OK, baby boomers! You should know the answer to that. “It’s Howdy Doody time!”

And it’s time this March for “Toys of the ’50s, ’60s and ’70s,” a new exhibit at the Sen. John Heinz History Center featuring many beloved and iconic examples from those decades — even a Howdy Doody marionette.

(Trivia time: “March of the Toys” is a number from the operetta “Babes in Toyland,” whose composer was Victor Herbert, an early conductor of what today is the Pittsburgh Symphony Orchestra.)

This “Toys” show offers visitors an opportunity to relive those happy days and wonder years, and that includes Andy Masich, the History Center’s president and CEO. “My greatest toy disappointment of my youth was not receiving for Christmas Rock’em Sock’em Robots,” he says. “That’s when I figured out the truth about Santa Claus.”

Now, he’ll be able to (somewhat) make up for that loss: Those over-the-hill bot-boxer boys will be at the show.

Likewise, History Center communications director Ned Schano will be able to enjoy surveying memorabilia from his youth. “I was a big ‘Star Wars’ fan as a kid, but like so many people, those figures are long gone,” he says.

​Masich, who still has an army of lead toy soldiers he received for his birthday in 1964, promises the show “will bring out the kid in all of us.” But “Toys” isn’t all fun and games. There’s also a loftier, historically compelling reason for assembling this show, developed in partnership with the Minnesota History Center: “The ‘Toys’ exhibition places our nation’s most popular toys in historical context and showcases how these iconic toys reflect three decades of dynamic changes in American life,” says Masich.

Post-World War II America was a prosperous, optimistic time of unparalleled fecundity in our nation, both in production of goods and also of children, hence the Baby Boom. More money, more kids, more need for toys, more pocket change to buy them. And a revolutionary new gadget to stoke and feed all of that: Television.

As Ozzies and Harriets purchased an Admiral or Zenith, TV set its sights on youth via shows such as “Davy Crockett,” “The Mickey Mouse Club” and many more, and the toy industry rolled out related toys and other items (yes, there’s a “Crockett” coonskin cap on view). The tube also served as a medium through which to pitch toys unrelated to any show. (Trivia time again: What was the first toy to be plugged on TV? Answer: Mr. Potato Head, who appeared in 1952.)

Plastics! The rise of that new material was yet another impetus for turning out more toys, allowing cost-effective mass production. In the past, toy production had relied on wood and metal, although these materials continued to be used.

Speaking of babes in Toyland, think Barbie! Back then (and still today, albeit to a lesser extent), there were toys for girls — Barbie, of course, and Susie Homemaker — and toys for boys — G.I. Joe and Erector sets. Later, gender-neutral toys arrived in the form of Playskool and McDonald’s play sets. The social changes of the 1960s were reflected in an African-American doll modeled after the lead character in the TV show “Julia.”

The 1970s saw the “Star Wars” craze — the force will be with us here, too, via Kenner figurines of R2-D2, Han Solo, Luke Skywalker, Princess Leia and Chewbacca, as well as the Millennium Falcon — and the digital age was dawning: Harbingers were computerized games such as Simon and Speak & Spell.

This History Center show allows you to interact and have some fun with the toys. Step into an arcade gallery and play vintage pinball games or arcade favorites such as Pac-Man and Donkey Kong, which premiered in the early 1980s. Try a multiple-choice video quiz and test your knowledge of vintage toys. Time-travel through recreations of living rooms from ’50s, ’60s and ’70s that feature TV sets showing vintage toy ads.

And don’t miss the Slinky Race, where challenges await visitors willing to maneuver these spring-like critters up and down steps. Did you know Slinky has a local connection? This clever — and accidental — invention by naval engineer Richard James is produced today in Hollidaysburg, Blair County.

Another local connection at “Toys” is a special exhibit saluting Wolverine toys, a Pittsburgh-based company that once produced such items as “Sandy Andy” toys, household appliance toys and pinball/marble games.

Have a favorite toy you want to share? Submit a picture for an online photo gallery at the Heinz History Center’s website (heinzhistorycenter.org).

Yours truly? I’ve held onto a few childhood toys through the years, but for the purposes of this “Spotlight,” I should salute Print Shop, a miniature kid’s printing press (and career harbinger) I received for Christmas 1965.