Marc-Andre Fleury in the Hot Seat

The Penguins’ curiously laid-back last line of defense is not your average 'tender. 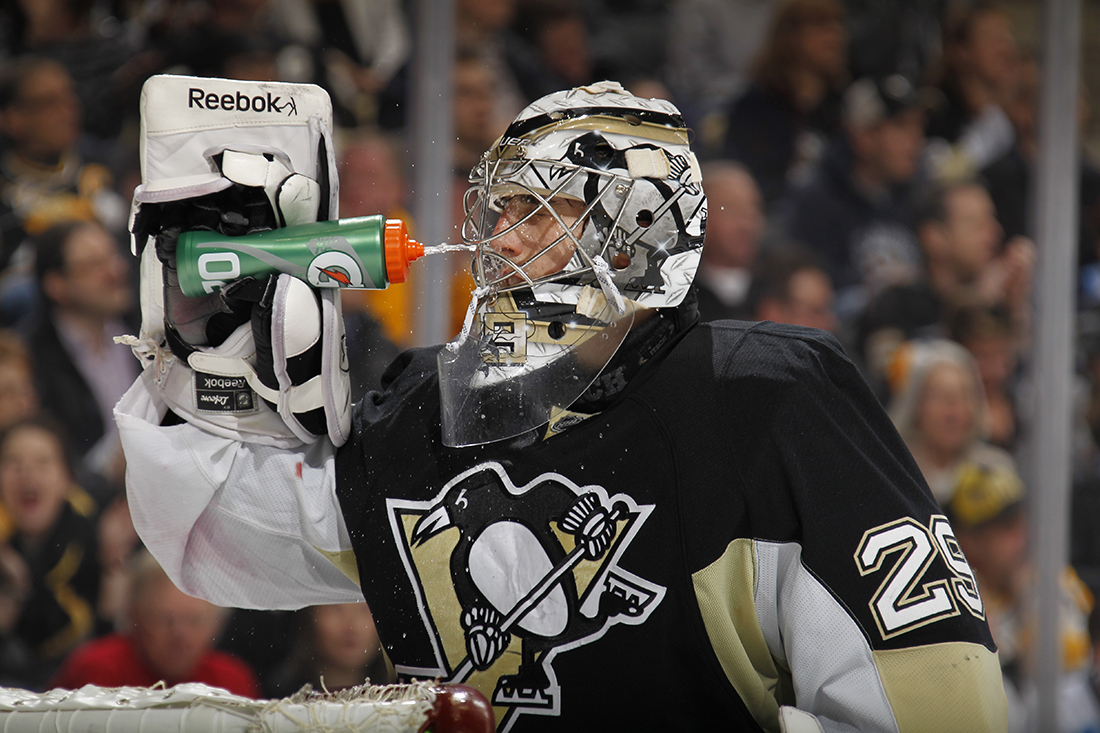 The hockey goaltender has always been a mercurial figure — personified by the black-and-white LIFE magazine photos of ’50s-era ’tenders posing dourly without masks, their faces stitched up like baseball leather. Or, at best, trivialized as goonish lugnuts like Slap Shot’s iconic Denis Lemieux (“You go to the box … you feel shame … and then you get free.”).

A goalie is supposed to be either a brooding loner (Tom Barrasso; Patrick Roy) or an unpredictable powderkeg (Dominik Hasek; Ron Hextall). And considering the kind of intestinal fortitude it takes to hurl oneself in front of a 104 mile-per-hour slapshot in various positions of masochistic yoga, these fellas should be a little weird, right?

Then there’s Pittsburgh Penguins goalie Marc-Andre Fleury, living inside the lonely biodome of sports-talk radio vitriol and loaded expectations. He’s a guy who — for some reason — is out there having more fun than anyone.

It’s 11 a.m. on March 13, just 14 hours after the Penguins came back from a two-goal deficit to beat the Boston Bruins, and Fleury is in the net for morning practice, gleefully barking a running play-by-play like an R-rated Mike Lange. He saves his best commentary for loquacious grinders Tanner Glass and Matt Cooke.

“Cookie gives it to everybody else,” Fleury explains with a laugh. “What goes around comes around — is that the saying? Don’t feel bad for him!”

Later, as the team huddles around coach Dan Bylsma, Cooke gets retribution by “accidentally” drinking from the wrong end of the Gatorade bottle, drenching Fleury instead. Cooke finds the gambit more hilarious than anyone, sticking his tongue through his checkerboard grin.

In the breakaway contest at the end of practice, Fleury casts himself in some kind of bizarro photo shoot. When the goalless Glass trudges down and winds up, Fleury lies down on the ice, pads stacked, reclined cheekily on his elbow like Burt Reynolds on a bearskin rug. Fleury stops the puck. When lumbering defenseman Deryk Engelland tries his luck, Fleury slides across to make the save but doesn’t bother to stop his momentum. He spins off into orbit with a laugh.

Then, on to Sidney Crosby. “The most fun guy to stop, for me, is Sid,” Fleury says. “Because he just tries so hard, and he’ll keep coming back until he scores.” Crosby attempts to go top-shelf on Fleury, aiming for the Gatorade bottle resting atop the goal for extra humiliation. Fleury flashes his glove. Crosby waits for the net to move, then dips his head as he skates away. Fleury, savoring the moment, suspends himself in a dramatic split.

Crosby skates away to, as Denis Lemieux would say, “feel shame.” The onlooking Penguins react with fervor.

It’s the kind of mood that coaches wish they could bottle. It’s the reason the Penguins believed in their goalie after he let up five goals in Game 5 of the 2009 Stanley Cup Finals. It’s the reason that, in the next two deciding games, Fleury stonewalled the Detroit Red Wings. And it’s the reason why, with two seconds left in Game 7, with Fleury’s momentum going one way and the Stanley Cup the other, he dove across the crease to make an absurdist save in the way that only he can — by abandoning all technique and reason. The way you do it if you’re still having fun. 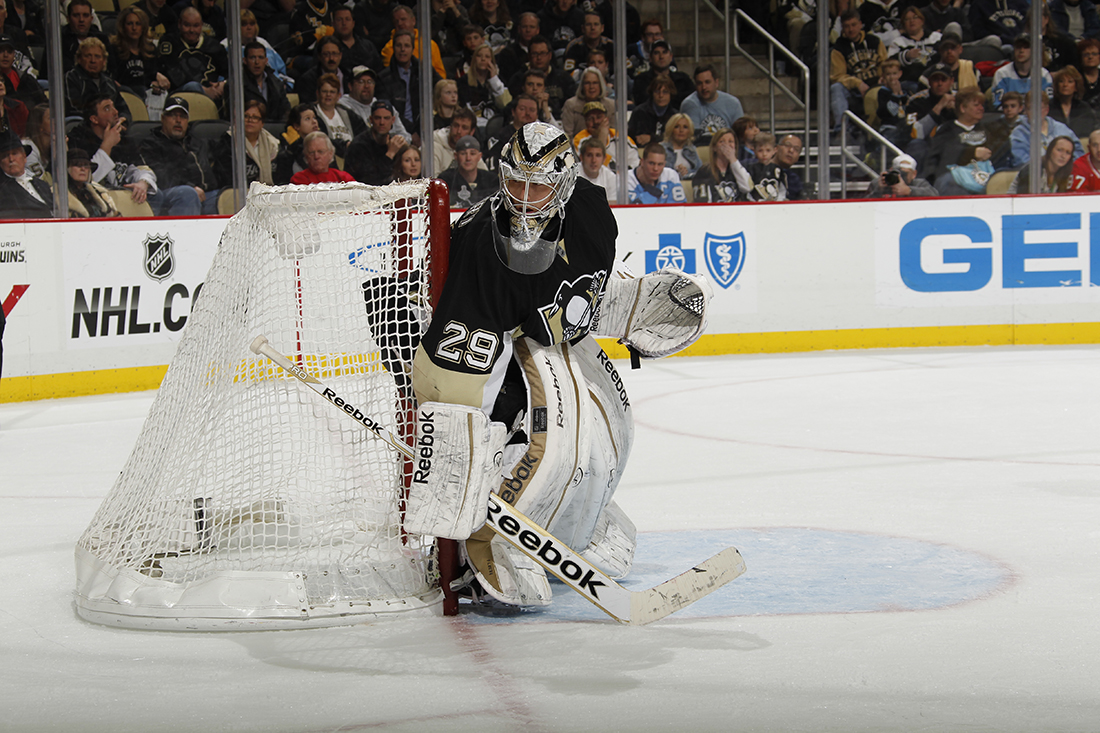 You have a reputation around the league as a bit of a conversationalist; you love to chirp at opponents on the ice. Who gives it back the best?
No. 1 is probably Ryan Malone. We played together here for a while, and when we play against one another now, he’s usually always hanging out in front of my net. I give him stick. He’s fun to mess with. [Alex] Ovechkin likes to brag, like, if he doesn’t score, “Oh, that one was close.” And I’ll be like, “Yeah right, not a chance.”

You got married last summer and invited all of your teammates to the wedding. That must’ve been quite a party. Who had the most beers?
Oh man, that’s a tough one. I didn’t keep track. Let’s just say everyone had … um … a lot of fun.

Who has the hardest shot in the league?
Either Zdeno Chara or Shea Weber. If you get a shot in the stomach from one of those guys, you feel it for a while.

Fill in the blank: You spend 75 percent of your downtime on the road doing what?
I love to go for a swim in the hotel pool. That was the best thing traveling as a kid, too. It’s one of those things that’s still cool.

What’s one thing you miss about the Civic Arena?
How loud it got.

Biggest perk about CONSOL?
No mice running around. [Laughs] No, we’re spoiled now. It’s all top-notch.

A lot of goalies are into yoga now. Are you a fan?
No, I tried it once and hated it. Too relaxing, man.

So the rule is, when you lose the shootout at practice, you have to grow a mustache. Who’d be the best Mustache Boy?
Kris Letang would be funny — he’s so self-conscious about his looks. He’d be mad for sure.

Pascal Dupuis said some of the Flyers are actually cool off the ice. Is he for real?
Uh … [Long pause] I heard from Max Talbot that [Scott] Hartnell is a good guy. Like he used to hate him when he was here, but he’s actually a good guy. [Editor’s note: At this point, teammate Craig Adams starts shaking his head at the next locker. “I don’t believe him,” Adams says.] Well, see? You can make your own opinion.  [Laughs]