In a letter for The Players' Tribune, Fleury recounts his 14-year career as a Pittsburgh Penguin and the bittersweet weeks leading up to his departure to Las Vegas. 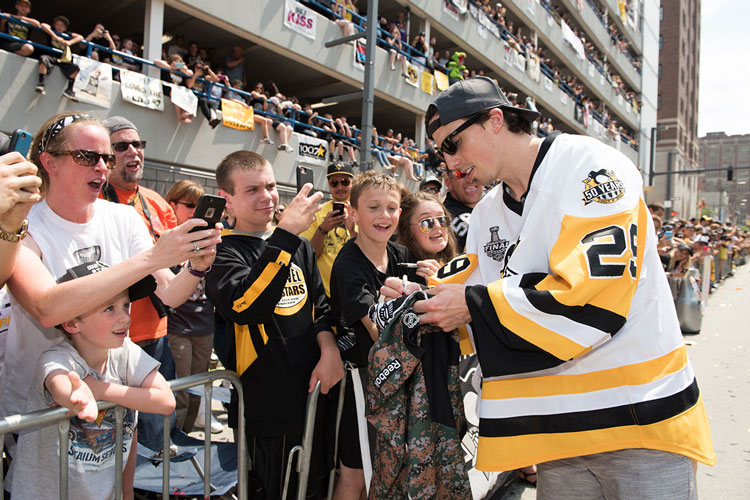 The title is as simple as it is sincere: “Thank You, Pittsburgh.”

Writing in The Players' Tribune, former Penguins goalie (it still hurts to say that) Marc-André Fleury bids adieu to the city and fans that he adored — who adored him right back.

Describing his time with the Penguins as “beyond my wildest dreams,” Fleury admits he was a very nervous rookie.

“There are so many expectations on a first-round pick, and I didn’t want to let anybody down. I just tried to do my best, and wanted to leave a good impression. But when you face Mario Lemieux in training camp, it can be quite intimidating, to say the least. Everyone knows him as Le Magnifique, a hockey legend. I always loved watching him growing up. I remember the first time I stopped Mario in practice. It was a simple warmup shot. But you better believe that I kept that puck — and still have it at home.”

Fleury couldn't say enough about the support from the fans from his first home game in October of 2003:

“Even that first night, the fans were chanting Fleu-ry, Fleu-ry. They were holding up signs that said, 'Welcome Home.' I honestly couldn’t believe it.”

To early in his final season when he was struggling in net:

“Everybody was getting ready for the anthem, and the crowd started chanting my name. It made no sense. I wasn’t playing well. The game hadn’t even started yet. But they were behind me anyway. Fleu-ry, Fleu-ry. Maybe they could sense that I was feeling a little down, and I needed it. We ended up winning the game, things turned around for me, and I ended up having a great season. That moment was the turning point, and it was because of our fans.”

Fluery goes on to thank teammates, coaches, management and others, and ends the letter as simply as he began it.

“Thanks, Pittsburgh. I will miss you.”

For Pittsburgh, the feeling is mutual.