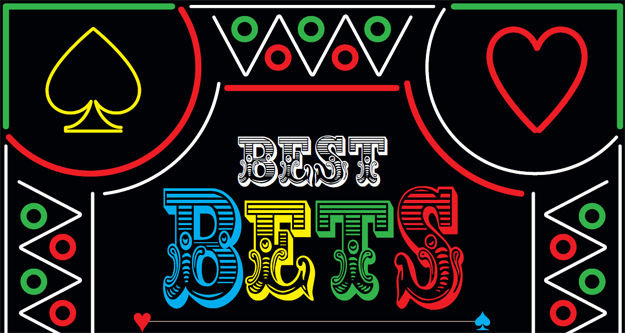 Late one night  in January 2010, I couldn’t sleep. I found myself aimlessly driving around town for a while, eventually ending up on Mount Washington. As I peered over the early-morning calm of a sleeping city, I spied the Rivers Casino and thought, Well, why not?

I’m pretty sure I didn’t win much of anything. I had a beer and wandered around a sea of blinking and beeping machines. But even in the eerie, 2 a.m. hum of the only place rockin’ long after our fair city called it a night, there was something I liked about being there.

Casinos are, fundamentally, an escape. They give you a moment away from everyday worries. All you need to concern yourself with is how long you can keep busy with the cash in your pocket. And if you just want food, a drink, a place to relax or simply room to breathe, most casinos can handle that, too.

I expanded my gambling horizons with a quick tour of the welcoming halls of gaming and racing that surround our city—from the North Shore of the Allegheny to an island in the Ohio. The mission: Don’t plan on winning big; try to lose slowly enough that you don’t have to sell your shirt in five minutes; and look like you know what you’re doing while gambling. 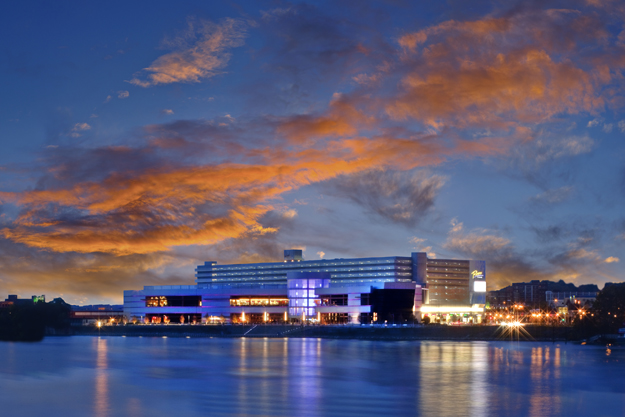 Thinking I’d start close to home, I scheduled a stop at Rivers Casino before an early-season Pirates’ game. One of the best things about the last outpost of the revitalized North Shore is how perfectly it complements nearby activities: Going to dinner at Hyde Park? Wander over for a nightcap and slots afterward. Headed to see the Bucs or bound for Heinz Field? Take advantage of the free parking at Rivers, play a few hands of blackjack and then head over. Seeing a concert at Stage AE? Fill up beforehand at the Grand View Buffet. Rivers is a good neighbor.

As much as I was craving the all-you-can-eat, globe-trotting buffet upstairs at Grand View—now with tempting lower prices: $13.95 for lunch and $19.95 for dinner—I decided to head over to Wheelhouse, the sports bar located on the main floor. It’s a big, nicely packaged place—perfect for watching the game or just hanging out with a beer and a snack. I grabbed a half-pound burger ($8) and a pint of the signature beer, 777 Ale ($6), and idly watched SportsCenter.

Full and happy, I confidently sauntered out toward the slots. The new table games are great—with old-school Vegas class and newly lowered minimum bets—but for me, the endless maze of slot machines is still the main event at Rivers. I sat down, popped in my Players Club Card and put a $20 bill in the machine.

Each pull of the lever (or, in modern terms, press of the “Repeat Bet” button) on the machine cost me a quarter. I was up for a few rounds, winning a dollar or two at a time, but the quarters eventually started sinking away. When I was down to six bucks, I cashed out.

As I headed toward the exit, I didn’t mind that I hadn’t turned my $20 into more. Rivers is the kind of place where you stop in, get some food, play some games and go home happy, win or lose. It’s quickly become part of the downtown landscape, and even if I never win a dime, I’ll return often.

Just before making it to the door, I threw a dollar into a $1-per-pull machine just for the heck of it. Some mild beeping and blinking informed me that I had turned the buck into a five. Not bad at all.

The track at Meadows Racetrack and Casino dates back to 1963, and while the casino is newer (and further expansion is on the way), the entire place feels like old-school entertainment. Maybe it’s the odd spectacle of live harness racing; maybe it’s the ’60s-style lounge; maybe it’s the cigar bar; or maybe it’s that they mix a fine whiskey sour. Either way, you’re partying like your parents used to.

I stopped in at the Meadows on a Saturday night and found the main casino floor to be crowded. The slots are plentiful, and the place was packed (there was some anger over the few remaining spots in the parking garage, I must admit). I spied a door that led to a bar with a few slots and tables nearby.

As I strolled in, a young woman informed me that this, the Adios Lounge, was open to Platinum players only. I was not entirely sure what a Platinum player was, but I was very certain that I was not one, so I quickly exited. If you’re the type that plays often, Meadows will definitely accommodate you, more so than a lot of places.

I, however, had not been there before, so such finery was not for me. I decided to regroup at Silks Lounge, the large bar in the corner. I ordered a cocktail and casually watched a big band infuse some soul into standards on the nearby stage. My mood improved markedly when the bill came—two mixed drinks were a mere $9.25.

The downstairs area, host to year-round harness races and simulcast betting, is perfect for kicking back with a beer, glancing at a wall of races near and far, and pretending you know what you’re doing when it comes to the ponies. I only laid down a handful of $2 bets that night—partially because I had to ask the friendly attendant how, exactly, to bet—but I’m eager to return for a future race and cheer a horse and petrified driver around the turns.

Later, I wandered upstairs to a quiet area by the casino steakhouse, Bistecca, and sat down. Music filtered up from a guitarist at the bar below, and I surveyed the gaming floor. I sipped my drink and felt relaxed. I realized that I hadn’t even gambled much that night but still had a fine time. If you know how to play it, The Meadows is a perfectly acceptable evening escape.

On my way out, I again found a spare dollar and stuck it in a machine. Once again, a $5 win appeared. Two for two on my way out the door. 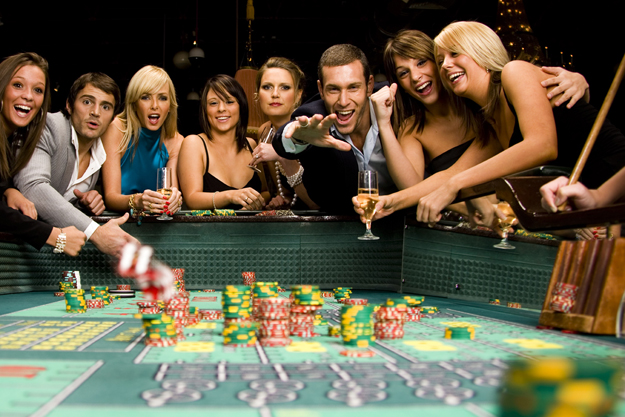 I am sitting at a $10-minimum blackjack table at Wheeling Island. It is the first table game I’ve tried—not just on this adventure, but, you know, ever. Until now, I was doing well. At one point, my stack of chips grew from $50 to $90. One more winning hand, I thought to myself, and I’ll have made a cool 50 bucks. That’ll be enough for my exit.

Then, I screwed up.

I knew that I did something unusual when the dealer announced to no one in particular: “Double Down on a hard 12!” I realized that I had exposed myself as a rube with little more than a basic understanding of this (or any) card game.
I lost that hand. The elderly man sitting next to me commented, “That was a gutsy bet.”

“Yup,” I replied, trying to add a note of I-do-it-all-the-time bravado in my voice.

Rather than admit that I knew nothing, I muttered a response close to the truth: “Gotta do something.”

I worked myself back to a reasonable 30 bucks—only down $20— and tipped the dealer a $5 chip, more as an apology than a gratuity.

After cashing in and restoring my dignity, I wandered around a bit. Being that Wheeling Island is, well, an island, the place has something of a tropical theme: A waterfall greets guests on entry, and Castaway’s Bar looks and feels like a true beach bar. I considered drowning my sorrows in the Cajun Meat Loaf Tower ($10.95) at the Breezeway Cafe or even putting my remaining $25 on black to try and double up to the price of the Ultimate Surf and Turf ($49) at The Pointe Steakhouse.

Instead, I headed for the greyhound racing track, billed internally as “The No.1 Greyhound Track in the USA.” I liked the odds on Miss Fantastic, so I put a $2 bet on her. After a photo finish revealed that she edged out a pup named Tracy Chapman, I cashed in my ticket for $7.80, noting that this marked my biggest win of the trip thus far. Before the next race, I grabbed a $6 burger-and-fries platter at the trackside diner.

Between the races, tables, food and comfortable hotel, Wheeling Island is an excellent place to spend the night. As you roll down sleepy South York Street, an old neighborhood at the end of the island, the casino and hotel rise like a pillar in front of you. It’s a true destination. Stay a while. 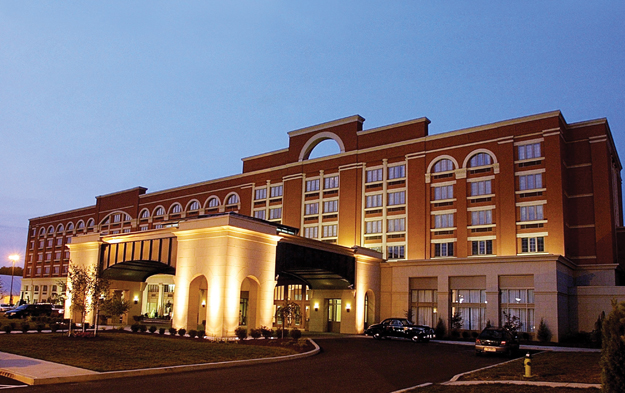 I did not expect that the word pastoral would appear in my notes on this assignment, but there it is. Surveying the West Virginia mountains set behind the thoroughbred racetrack at Mountaineer, it feels almost like a quiet day at Kennywood—old-fashioned buildings, plenty of food and a sense that you are away from the world.

You can focus on Mountaineer as a resort if you’d like, getting spa treatments, working out in the fitness center and dining at La Bonne Vie Steakhouse. You can treat it like a pure racetrack, sipping cold beer and downing hot dogs between races. You can stick to the casino, with its charming theme—it’s called the speakeasy and is done up in ’20s gangster style—and low minimums at the tables.

But you’re better off doing it all. Book a weekend. Wander from the slots to the track to the bar to the concert hall (Rick Springfield just played here, and more shows are scheduled throughout the year).

As for me, I grabbed a corn dog, nachos and an I.C. Light for a grand total of $6.80. This grub, available inside the grandstand, was tasty, filling and cheap enough that I had cash left over to place a few more bets on the first race.
I knew nothing about horse racing, just like I knew nothing about blackjack. But the guy at the Meadows taught me how to bet, so I was doing things confidently this time.

There was $10 left in my budget for this expedition, and I was thinking big. Sure, if I was right about No. 3, that $10 could turn into a 50, but why stop there? I was going to make back everything I spent at these four casinos, including the gas money. I was betting the trifecta: 3-2-8. Here we go.

It had been raining all day, but, by this point, it was clearing up, and—no creative license, honestly—a rainbow appeared, terminating at the starting gate. I took a breath of the spring air and watched the light fade over the mountains.
The bugle sounded, the ponies entered the gate and I paused. Mountaineer might be the most obvious escape of the four—out of shouting range from town and a perfect place to relax during a long weekend—but all these casinos allowed me to get away from the world for a couple hours, push work out of my head and unwind. I lost money at all of them, but the point wasn’t to win—the point was to enjoy the trip. And I did—without losing my shirt.

By the time I shook out of this reprieve, the horses were in the home stretch. Sure enough, No. 3 was solidly in the lead, trailed at about a length by … Could it be? No. 2! I was two-thirds of the way to a huge win.